JULIO CESAR AGUILAR/AFP via Getty Images
The majority of Americans are stressed, sleep-deprived and overweight and suffer from largely preventable lifestyle diseases such as heart disease, cancer, stroke and diabetes.

Being overweight or obese contributes to the 50% of adults who suffer high blood pressure, 10% with diabetes and additional 35% with pre-diabetes. And the costs are unaffordable and growing. About 90% of the nearly $4 trillion Americans spend annually for health care in the U.S. is for chronic diseases and mental health conditions. But there are new lifestyle “medicines" that are free that doctors could be prescribing for all their patients.

Lifestyle medicine is the clinical application of healthy behaviors to prevent, treat and reverse disease. More than ever, research underscores that the “pills" today's physician should be prescribing for patients are the six domains of lifestyle medicine: whole food plant-based eating, regular physical activity, restorative sleep, stress management, addiction reduction or elimination, and positive psychology and social connection.

We are a primary care preventive medicine physician and a computational immunologist, both committed to applying state-of-the-art research to inform the clinical practice of lifestyle medicine. Our findings and recommendations were just published. We highlight the key take-home points for each of the areas below. 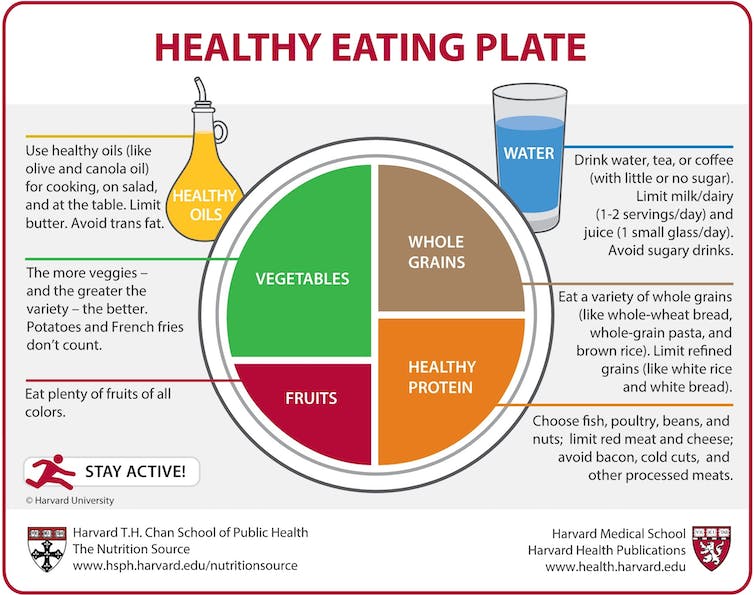 Use the Healthy Eating Plate as an evidence-based guide for creating healthy, balanced meals.

Diets high in fruits, vegetables and whole grains and lower in animal products and highly processed foods have been associated with prevention of many diseases. These diets have also improved health and even reversed common cardiovascular, metabolic, brain, hormonal, kidney and autoimmune diseases as well as 35% of all cancers.

We believe that future research should include larger trials or new research methods with emphasis on quality of diet. This would include more data on the micronutrient composition and protein sources of plant versus animal-based foods – not just proportion of fat, carbohydrates and protein. Such trials should include children, as many adult disorders are seeded as early as infancy or in utero.

For decades, surgeon generals' guidelines have emphasized that daily moderate-to-vigorous aerobic physical activity has both immediate and long-term health benefits. For example, why we age and the rate at which we age – chronological age versus biological age – is determined by multiple molecular processes that are directly influenced by physical activity. And now scientists are gaining a better understanding of the cellular and molecular changes that exercise induces to reduce disease risk.

Research priorities for scientists and physicians include obtaining a deeper understanding of the type, intensity and frequency of activity, and better insights into the molecular and cellular alterations that occur with exercise.

Sleep helps the cells, organs and entire body to function better. Regular uninterrupted sleep of seven hours per night for adults, eight to 10 hours for teenagers and 10 or more for children is necessary for good health.

Though understudied, there is evidence that high-quality sleep can reduce inflammation, immune dysfunction, oxidative stress, and epigenetic modification of DNA, all of which are associated with or cause chronic disease.

Therefore, research into the biological mechanisms that underlie the restorative properties of sleep could lead to environmental or population-based and policy approaches to better align our natural sleep patterns with the demands of daily life.

One of the most powerful mechanisms to reduce stress and enhance resilience is by eliciting a relaxation response using mind-body therapies and cognitive behavioral therapy.

More research is need to gain a better understanding of how these therapies work.

Many social, economic and environmental factors have fueled the national rise in substance abuse generally and, most tragically, the opioid epidemic.

Physicians and researchers are beginning to understand the underlying physiology and psychology of addiction.

Yet the continued stigma and disjointed or absent access to services remains a challenge. Clinicians and scientists need to explore how to predict who is more vulnerable to addiction and find ways of preventing it. Treatment that incorporates integrated care focused on all the patient's needs should be prioritized.

Maintaining a positive mindset through the practice of gratitude and forgiveness has a significant impact on psychological and subjective well-being, which are, in turn, associated with physical health benefits.

Social connectivity, namely the quantity and quality of our relationships, has perhaps the most powerful health benefits.

Further study is needed to uncover how an individual's biology and chemistry change for the better through more social interactions.

Unhealthy lifestyle behaviors produce a vicious cycle of inflammation. While inflammation is a healthy, natural way the body fights infections, injury, and stress, too much inflammation actually promotes or exacerbates the diseases described above.

The inflammatory response is complex. We have been using machine learning and computer modeling to understand, predict, treat and reprogram inflammation – to retain the healing elements while minimizing the detrimental more chronic ones. Scientists are unraveling new mechanisms that explain how chronic stress can turn genes on and off.

We and others who study lifestyle medicine are now discussing how we can leverage all of these approaches to improve clinical studies on the impacts of lifestyle interventions.

At the same time we and our colleagues realize that there are environmental challenges and barriers that prevent many people from embracing these lifestyle fixes.

There are food deserts where healthier foods are not available or affordable. Unsafe neighborhoods, harmful chemicals and substances create constant stress. Poor education, poverty, cultural beliefs and racial and ethnic disparities and discrimination must be addressed for all people and patients to appreciate and embrace the six "pills."

The application of lifestyle medicines is particularly important now because unhealthy lifestyles have caused a pandemic of preventable chronic diseases that is now exacerbating the COVID-19 pandemic, which disproportionately afflicts those with these conditions.

Ask your doctor to "prescribe" these six "pills" for a longer and better life. After all, they're free, work better than or as well as medications and have no side effects!