Last week I had a conversation with a friend after my studio cycling class. He remained in the room after everyone had left, his long legs burning calories while I cleaned the room. He’s my height—six-three—but easily has a solid 30 pounds of muscle over me, which makes sense given he spent years as a world-class rower and is currently a premier wife-carrier.

We talked about our respective obsessions with fitness. Turns out we both grew up overweight, with big ears—perfect targets for bullying, longtime victims of schoolyard taunting. At some point we grew quickly and thinned out, applying the frustrated energy of being a harassed youth into an obsession with movement that continues unabated—if anything, we’re more driven now—three decades later.

This obsession is why, 15 years ago, I decided to work in fitness. While I loved being a full-time journalist, office life left my body deflated. Since those days I’ve moved alongside and taught tens of thousands of people of all levels of fitness. Today I know a number of people who don’t have to work that hard to keep weight off and plenty of others who exercise daily and follow healthy diets yet still border obesity.

Attitude is of primary importance, which is critical in a media dominated by fad diets and workouts. Genes matter—some of us really have to work harder than others—yet body image begins with your mindset. While no one-size diet or fitness protocol is for everyone (as much as many holistic opportunists would like you to believe), your attitude about your body is important. And one disturbing trend is on the rise: giving up. 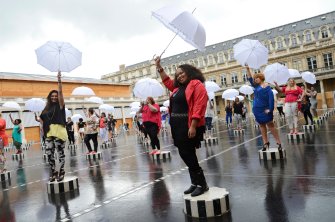 That’s what a recent study published in JAMA discovered. Viewing trends from 1988-2014, the researchers, from Georgia Southern University, Statesboro, noticed that of the 27,530 participants analyzed, six percent fewer overweight or obese adults were trying to lose weight in 2014 than 1988. Fat acceptance is a driver of this trend.

Which, in some ways, is positive. We should be moving from the promotion of rail-thin models and steroid-fueled weightlifters to a more inclusive (and realistic) presentation of the human body. What fat acceptance offers us socially, however, it loses with potential health problems. As the NY Timesreports:

Public health experts fear that this trend toward “fat acceptance” bodes ill for future well-being and the soaring costs of chronic weight-related ailments like heart disease, hypertension, Type 2 diabetes and more than a dozen kinds of cancer.

The problem is so pressing that JAMA published an entire issue addressing obesity in January 2018. In one article, economist Mary A. Burke, whose work centers on social norms, and Baruch College professor Frank Heiland, whose research in part focuses on health and obesity, write that the normalization of being overweight is a consequence and not a cause of growing rates of obesity. The economic and social environment, filled with cheap, processed food, has greatly aided our growing waistlines.

Given that we’re always influenced by and in interaction with our environment, the more overweight people we witness, the more we normalize it. Instead of gauging our own bodies based on a healthy standard, the bar is lowered as we commune with and observe the habits of others. Dangerously, these habits hold more influence over our eating (and exercise) patterns than does information we read on a credible website or hear from our doctor.

Stigmatizing the overweight and obese, the authors continue, is counterproductive. Given the psychological distress associated with this type of bullying, the overweight are more likely to binge eat, for example. It’s a tough line to walk, both inspiring people to lose weight but also not making them feel bad about their bodies. It involves a skill set that, in our current environment, many are incapable of honoring.

Yet complacency solves no problems. As the authors conclude:

Rejecting the stigmatization of overweight does not mean becoming complacent about the health risks associated with obesity, but instead means recognizing that stigmatizing weight is unfair and counterproductive. Rather than deploying negative social stigma to encourage weight loss, a more effective strategy might seek to harness peer effects in a positive way to promote and spread healthy behaviors.

In order for new habits to be implemented, the overweight have to take initiative. And that doesn’t appear to be the case. As the NY Times notes, while Medicare covers up to 20 weight counseling sessions each year, few are taking advantage. Add to this misinformation about nutrition. Another JAMAarticle highlights the confusing packaging labels designed to trick consumers. Anyone curious of the marketed “low fat” foodstuff, for example, might overlook the high sugar content. 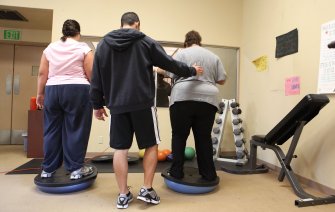 This epidemic might require intervention. As much as Americans love freedom fries, health care costs are also a public, not just an individual, concern—a tough lesson in an individualistic culture. Bariatric surgeon, Dr. Edward Livingston, at University of Texas Southwestern School of Medicine, believes we need more than a soda tax to address this issue. Even as soda consumption goes down obesity rates are increasing. Livingston instead endorses product taxes based on calories; the revenue could help make healthy foods more affordable. Instead of focusing on sugar, he believes a systemic overhaul of our entire food system is necessary.

As the Times mentions, “more fitness, less fatness” is another way to address this issue. Six days every week I watch students walk into Equinox. While everyone enters for varied reasons, the connective tissue binding us is the pleasure we collectively receive working together as a group. Community increases the likelihood students will stick to an exercise regimen. They’ve entered an environment where working hard offers an emotional, as well as physical, payoff. The experience brings with it a level of contentment and personal satisfaction not found while working out alone.

Yet there are challenges with this as well. First, you have to step inside. Many people are uncomfortable stepping into a gym, which is unfortunate. The term “group fitness” is also used in anthropology and evolutionary biology; it’s one of the reasons Homo sapiens transformed from mediocre apes to world dominators. When we work together, we evolve. We even thrive. Movement is our biological inheritance.

Considering the data, we’re not thriving right now. Yet we’re also acutely aware this path is not sustainable. The journey to optimal health does, in fact, begin with acceptance: accepting the fact that wherever you are, right now, is where you are. But it cannot end there. There’s simply too much at stake.

March 6 marked the 50th successful launch of SpaceX’s Falcon 9, which the company plans to soon use to send humans into space.