According to a national poll conducted last week by Public Policy Polling, Congress is more noxious and scurrilous than a cockroach infestation. In a series of head-to-head comparisons, Congress also proved more unpopular than traffic jams, root canals, the despised band Nickelback and even colonoscopies — though Americans did tend to prefer their national legislature to both North Korea and gonorrhea. Here are a few of the numbers, as presented by the polling firm:

It’s gross to have lice but at least they can be removed in a way that given the recent reelection rates members of Congress evidently can’t: Lice 67, Congress 19

Brussel sprouts may have been disgusting as a kid, but evidently they’re now a lot less disgusting than Congress: Brussel Sprouts 69, Congress 23

Colonoscopies are not a terribly pleasant experience but at least they have some redeeming value that most voters aren’t seeing in Congress: Colonoscopies 58, Congress 31

OK, the poll’s comparison of incommensurables is a touch ludicrous. But the upshot is clear: Americans aren’t very happy with the job Congress is doing. Ezra Klein wished the 112th Congress — now officially the least productive assemblage of legislators the country has even seen —“goodbye and good riddance” last week, along with the following graph: 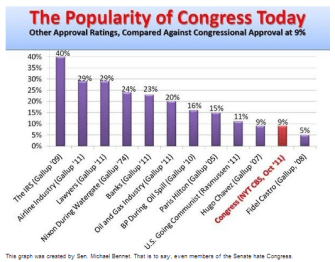 What is going on here? How could the popularly elected legislative branch of the national government be so deeply, broadly and relentlessly unpopular? Yes, it has something to do with several near-disasters and a few grave mistakes, including the debt ceiling debacle in 2011 and the barely averted dive off the fiscal cliff at the end of 2012. Americans’ ire at Congress could be inspired by the body’s seeming inability to do anything, by its mode of partisan posturing, by its members’ seeming disregard for the common interest of the nation.

But none of these reasons explains the enduring quality of the unpopularity. Ezra Klein points out that the previous Congress was a lot more productive than the 112th:

The fighting 111th passed the American Recovery and Reinvestment Act (better known as the “stimulus”), the Affordable Care Act (aka “Obamacare”), and the Dodd-Frank financial reforms. It passed the Lilly Ledbetter Fair Pay Act and expanded both the Serve America Act for community service and the Children’s Health Insurance Program.

Yet this significantly better record did not translate into much higher support. Approval ratings during 2009 and 2010 (the span of 111th Congress) were only marginally higher than in 2011 and 2012 (the 112th), and lag way behind 2004 levels, when at one point nearly half of Americans were satisfied with the job Congress was doing. So there must be something else at work, some deeper cause of our dissatisfaction.

Jean-Jacques Rousseau might say that Congress has become more and more unpopular as Americans have begun to appreciate its basic illegitimacy as a law-making institution. For Rousseau, true political freedom is only found when each citizen is an active participant in the law-making process of a society. If people are to live harmoniously and autonomously, they must all have a direct role in public affairs. Voting for “representatives” to do the job for us is no substitute. In fact, it is a recipe for slavery:

Every law the people has not ratified in person is null and void — is, in fact, not a law. The people of England regards itself as free; but it is grossly mistaken; it is free only during the election of members of parliament. As soon as they are elected, slavery overtakes it, and it is nothing. The use it makes of the short moments of liberty it enjoys shows indeed that it deserves to lose them.

Maybe we’re getting what we deserve after all these years of selling ourselves to our representatives in Congress. It’s difficult to imagine a viable alternative — other than in small, local experiments, direct democracy seems out of the question for the 311 million members of the American polity. One ironic possibility, which I develop at the Economist today, is to empower House members with longer terms in office. There is strong evidence that frequent elections only exacerbate the travesty of Washington’s legislative slug-fest.

In any case, Rousseau’s complaints about representative government have never rung so true. We elect Congress, and yet we hold cockroaches in higher esteem.

Announced this Monday, the possible planet is just one of 461 new candidates, out of a total of over 2,700, located by NASA’s Kepler space telescope since its 2009 launch.