In the late nineties, physician Steven Bratman noticed an increasing number of Americans becoming so obsessed with healthy eating that a paradox emerged: their focus on certain foods became unhealthy as they eliminated more and more foods from their diet; simultaneously they increased their anxiety and experienced social isolation due to a fear of swallowing “impure” foods. He coined this condition orthorexia nervosa.

I’ve known people with this condition; it essentially goes like this: you read an article stating meat is toxic, then decide to cut meat out of your diet. After which you discover an Ayurvedic rant against nightshades, so tomatoes, eggplant, and a variety of peppers are out. And oh, garlic and other root plants and vegetables stoke a mysterious “inner fire,” creating agitation and restlessness during meditation, so they too must be abandoned. After watching the false claim in “What the Health” that eggs are as deadly as cigarettes, you stop eating one of the healthiest foods on the planet. On and on restrictions add up until you’re subsisting (barely) on one or two foods.

This psychological disorder exists on a spectrum. Vegans are careful not to consume animal products, so elimination is required. But the range of potential foods they can eat is widespread. While vegans can be orthorexic, it is often prevalent in “counting” diets, in which you incessantly keep track of the percentage of carbohydrates versus fats and protein, for example.

The ketogenic diet is one such example. While I’ve written positively about this diet, and many studies confirm its efficacy for weight loss, longevity, and cardiovascular health, there is always the danger of slipping into an orthorexic state of mind. I’ve witnessed people starting out with ketogenic diets treat gluten like the world’s most dangerous toxin. Restriction of carbs should not result in the complete avoidance of them.

Yet that’s how the brain is designed: the emotional and physical high we get when changing our diet is correlated with advocacy, often to the point of blind devotion. I’ve personally had success with a ketogenic-like diet; cutting down on carbs has served me well. This does get tricky when eating out, however.

Restaurants cater to our addictive habits, which often means sugar in places you’d never expect it. “Healthy” takes on entirely new definitions when you leave the cooking to others. But even at fast food restaurants, it’s possible to cut down on carbs, especially as more chains are catering to low-carb and Paleo diets. A few examples:

While fried chicken is delicious, it is cooked in vegetable oils heated to a dangerous temperature; it’s also covered in breading, which brings the carb level up to 8-11 grams of carbs per piece. By contrast, all of the grilled chicken offerings have no carbs. Leave the biscuits behind, obviously. 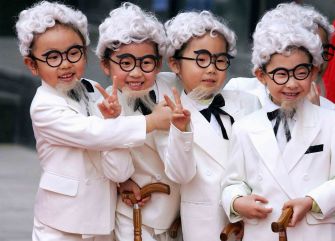 Beijing, CHINA: Young Chinese children dress up as US fast food chain Kentucky Fried Chicken’s Colonel Sanders look-alikes during a store opening ceremony in Beijing, 12 April 2006. As China’s economic transformation brings more wealth to many of the nation’s 1.3 billion residents, many are spending more on food, as last year Chinese spent 780 yuan (96 USD) per capita on food, 135 times more than in 1978, when the country was beginning to emerge from the Cultural Revolution. (AFP/AFP/Getty Images)

One of the great things about the Chipotle model is the build-your-own mentality, which gives you more control of what goes into your meal. Their site even offers a nutrition calculator. 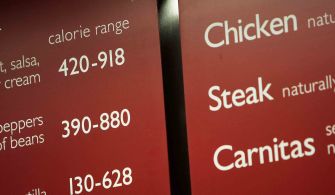 Calories are listed next to menu items at a Chipotle Mexican Grill July 18, 2008 in New York City. New York is now the first city in the country to implement a law forcing chain restaurants to post the calorie count of each food next to the items on their menus. Chris Hondros/Getty Images)

For keto fans, choose the burrito bowl instead of burrito or tacos. Avoid sofritas (nine grams carbs per serving) and add the chicken or carnitas for no carbs and maximum fat. The fajita vegetables are your fillings, at five grams of carbs; the rice is between 36 and 40, while beans are just over half of that. Choose the cheese over the queso, which has one gram of carbs instead of four; avoid the roasted chili-corn salsa, which has 16 grams of carbs. In fact, pass on all of the extras, except maybe the guacamole, which at eight grams of carbs and 22 grams of fat is your best bet.

While the fanaticism associated with this California staple is a bit much for me—it’s a decent burger, but the cult status is overwhelming—the beloved chain is known for its not-so-secret  secret menu. 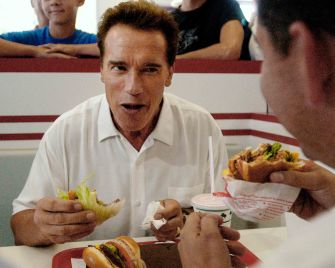 California gubernatorial candidate Arnold Schwarzenegger eats at an ‘IN & Out’ restaurant with with California Assemblyman Abe Maldonado during a lunch break on his ‘California Comeback’ bus tour in October 4, 2003 Merced, California. This is the final weekend before the recall vote on October 7. (Stephan Savoia-Pool/Getty Images)

For those following keto, Protein Style is your go-to. That’s your burger style wrapped in lettuce. I’d caution against the uber-popular Animal Style, though, as that double dose of Thousand Island spread is going to double your sugar intake, though to what degree is uncertain given that it’s a secret sauce.

As a Jersey native, I’m no stranger to subs, though in all honesty I never came across a Jersey Mike’s while I lived there. We were loyal to our local businesses in this regard. While the concept of a “sub in a tub” might have been blasphemy during my childhood, this chain was the first to introduce it into the popular lexicon. For keto fans, it’s the way to go. A regular wheat BLT has 65 grams of carbs; putting it in a tub means you’re down to six grams. Make sure to slather on mayonnaise, as those two extra grams of carbs are worth the doubling of your fat intake. As with everywhere else, watch the spread additions, as the sugar content ticks up quickly.

Well, good luck. I mean, bacon, eggs, sausage links—pretty easy to eat keto in this chain. But why would you go to IHOP for eggs? Three buttermilk pancakes equal 57 grams of carbs. 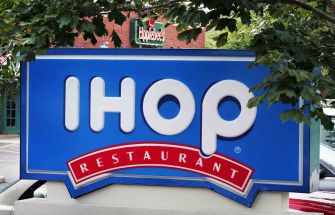 The Cinn-A-Stack—does anyone really eat these?—is 127 grams, three above the Bananas Foster Brioche French Toast. The crepes—yeah, ixnay those as well. There is a long list of 2 x 2 x 2 options with eggs and meat, which is your saving grace if you ever find yourself stuck inside of an IHOP. 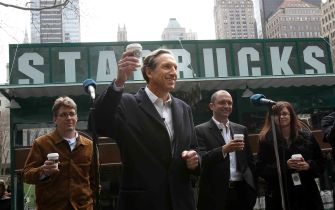 Starbucks Corp. Chairman and Chief Executive Howard Schultz (C) toasts at the launch of their new ‘everyday’ brew Pikes Place Roast in Bryant Park April 8, 2008 in New York City. Starbucks constructed a replica of the original Seattle Pike Place Market Starbucks in Manhattan’s Bryant Park to celebrate the launch. The new brew is part of the company’s efforts to increase U.S. sales, which have suffered amid a weak economy and growing competition from Dunkin’ Donuts, McDonald’s and other coffee shops. (Mario Tama/Getty Images)

Just get an Americano. In every other situation, either drink or food (save straight espresso), you’re in trouble. One crafty blogger mentioned that she enjoys the bacon, egg, and cheese on a bun; she asks the barista to serve it open-faced so that she can eat the middle and discard the bread. Unless you’re in an absolutely pinch for time, however, go somewhere else for breakfast. I mean, microwaved eggs?

Related
Life
Scientists use CRISPR to insert an alligator gene into a catfish
Disease kills off 40% of farmed catfish. This gene protects them.
Neuropsych
How you breathe affects your brain
Your breathing rhythm influences a wide range of behaviors, cognition, and emotion.
Health
What happens when regular porn watchers abstain for a week?
Researchers watched for signs of withdrawal — but didn’t find any.
Neuropsych
Daily caffeine intake temporarily alters your brain structure
Compared to people who took a placebo, the brains of those who took caffeine pills had a temporarily smaller gray matter volume.
Thinking
Why you should laugh at yourself, according to Seneca and Nietzsche
“It is more human to laugh at life than to lament it.”
Up Next
Surprising Science
Human brains can recover after flatlining, study suggests
The findings could help medical professionals better determine the official time of brain death, and might have implications on the protocols for organ donation.