Bonjour! Today we bring you news from a far-off land called “France”, or as the French pronounce it, “Fronce”. You may have heard of it due to its four most notable national exports: fries, kissing, art-house movies, and smoking past the age of 30.

But its capital city, Paris, is in the news this week for an entirely different reason: they’ve installed public urinals on city streets so that people can, um, pee and go as they please. They look like mailboxes and are called “uritrottoirs”; the name is a combination of the French words for ‘urinal’ and ‘sidewalk’. Perhaps the most contested one has been placed very close to the heavily-trafficked Notre Dame cathedral, while residents in upscale neighborhoods are balking at the idea of people taking a leak outside their door.

If you need to use one… just walk up to it and unzip your pants and relieve yourself. It’s that simple. The uritrottoirs are filled with hay and are used for composting once they’re full. The design leaves little to the imagination—quite literally—since there’s very little to hide the fact (or your penis) unless you step right up to the machine. Take a look for yourself. Nuanced, this ain’t: 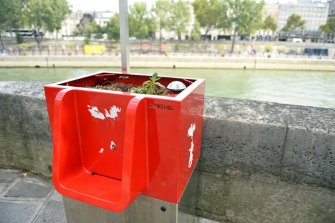 Sounds gross, doesn’t it? It is… until you consider the fact that a lot of people, namely men (more on that in just a second), pee on the streets in Paris. Especially once the bars let out, and particularly after soccer games. So the city has taken the matter into their own, um, hands in order to clean up the streets. Contrary to popular belief, urine isn’t sterile. While perhaps far less bacterial than germophobes might think, it does contains a whole host of microbiomes — and once out in public can become a breeding ground for bacteria. So maybe the whole “public whizzing” thing isn’t as gross as it may seem.

Another thing to note: these are only available for men… or extremely enterprising women. Is that sexist? Absolutely. French feminist Gwendoline Coipeault told Reuters: “They have been installed on a sexist proposition: men cannot control themselves and so all of society has to adapt.” Indeed, this is a startling oversight. If half the population can’t use one, is it really fair to everyone?

Just do what I do: go to the fanciest restaurant and tell them you’re meeting someone. Walk to the bathroom while pretending to look for someone. Go to the bathroom. Wash hands. Leave without saying anything or making eye contact. You’ll be amazed how far confidence and a smile can get you in this world, especially when you lower the bar enough to just finding a good bathroom while you’re walking around a big city.

Either way, looks like the uritrottiors are here to stay. At least right now we’ve got lots of footage of news crews filming men peeing. Here’s to journalism in 2018!

MIT researchers find that 1–2 percent of Earth’s oldest mantle rocks are made from diamond. rnrn