Are you the sort of person who solves problems with a single “A-ha!” moment, more often than not? Do you find sitting down and analytically working through a problem boring? Well, take pride. A new study shows you are going to be correct more often than your analytic friends in problem solving – if you have the time.

The specific kind of gut feeling that the study talks about is “insight“. Defined as ideas that “emerge into consciousness in an all-or-nothing fashion when the unconscious solving process is complete“, these are the proverbial “A-ha!” moments of understanding when the answer to our problem is suddenly clear to us.

Many great thinkers have noted their use of insight over analysis for certain problems. Even Einstein thought that insight was a better method to use for problem solving sometimes, noting that he often made “a great speculative leap” to an answer then determined why it was correct after the fact. 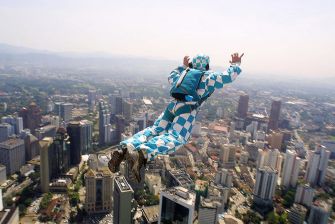 A speculative leap of Einsteinian proportions.

But, why is this the case? Shouldn’t gut feelings and insight be less accurate than analysis? What gives?

A study at Northwestern University and The University of Milano-Bicocca by Carola Salvi, Emanuela Bricolo, John Kounios, Edward Bowden & Mark Beeman presented various problems to subjects and studied how they solved the problem, how accurate they were, and how long it took for them to solve it.

Participants were given 15 seconds to answer, and were told to mark their answers as being solved by an insight or by analysis. They were told there was no wrong answer in how they solved the problem.

Questions solved with insight were correct 93.7% of the time, while those solved with analysis came in at a poor 78.3% success rate. The people who used insight also did so faster than their counterparts when they managed to solve it at all.

Things got more interesting when the researchers looked at the wrong answers. The two kinds of solutions gave differing errors. While people who relied on insight often just ran out of time, or missed something large in their answer. People who used analysis often added something wrong, as they thought out the answer and went down the wrong path.

This is not to bash analytic methods of problem solving; participants who used insight often did not submit an answer in the given time limit, while people who used analysis often gave some solution in time. If you need to have at least a partial answer with some accuracy, analysis is the way to go. If you have an all-or-nothing problem, insight might be best.

Insight is more than just a guess, but rather the answer that your brain has already figured out. If you have the time for it, it can be more reliable than analytic thinking. When you use analysis, you are finding a series of intermediate answers and then piecing them together; if you make a mistake at one point, the whole thing falls apart. Of course, with insight, you might not know why you have your answer, unlike when you use analysis.

So, if you want to solve a problem, you might get an edge by giving your mind time to reflect on it. And if somebody tells you that you need to be faster or more analytic about things, tell them to lay off – you just think like Einstein. To buy yourself some extra time, maybe have a shower.

Questioning isn’t just a way to get the right answer — it’s also a means for sustaining relationships and creative thinking.
Thinking

We could even benefit from more whataboutisms — if they’re used properly.
The Learning Curve

Instead of the death penalty, let’s put dangerous criminals in a coma

Prison is an unreliable method of punishment. Let’s do better.
Neuropsych

Theory of mind: What chess and drug dealers can teach you about manipulation

Grandmasters and drug dealers have one thing in common: They are many steps ahead of their rivals.
Up Next
The Present

A patent filed for Amazon’s “airborne fulfillment centers” reveals the e-commerce giant’s plans for the future of delivery.