Tarot is Irrational, Superstitious Claptrap – But That Doesn't Mean It's Not Useful

Dreams are not rational, neither are fantasy novels and comic books and yet they're immensely valuable in processing our thoughts, feelings and moral quandaries. Does Tarot do the same? 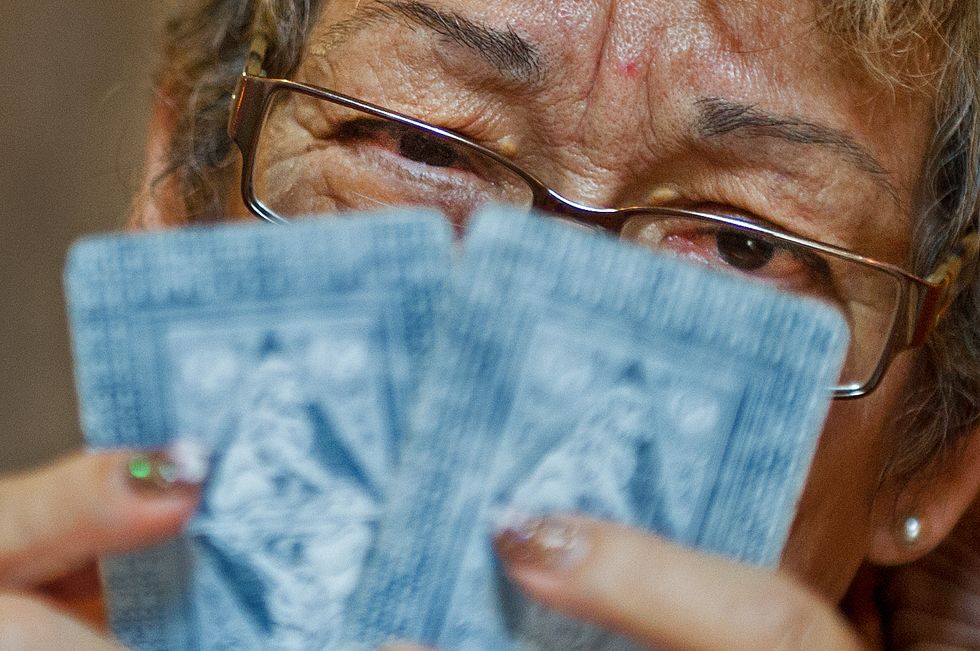 Sylvia Quintero, an astrologist and Tarot card reader, shares her visions on politics and the future. (Photo: PAUL J. RICHARDS/AFP/GettyImages)

We are generally a rational species. We make decisions based on what we can observe, driven by our self-interest. Our modern societies are very much science-based, utilizing scientific inventions, derived through reason, and yet about 89% of Americans believe in a God (according to the Pew Research Center), a number that is not changing dramatically (down from 92% in 2007). While European countries are becoming less religious (and less Christian), the tremendous growth of Islam around the world ensures that a big portion of Earth’s population will continue to hold beliefs in the divine and supernatural for the foreseeable future.

In fact, it is this concern with the future that fuels the popularity of tarot card reading, a decidedly less-than-rational activity that shows no signs of dying out. In fact, the Village Voice claims that New York City is in the midst of a widespread tarot revival. Tarot is also in recent news for being used in secret Scottish government meetings.

If you’ve never come across tarot cards, they are basically intricately designed playing cards that are used by some to try to divine the future, understand the past, and even help make important decisions.

Tarot did not start out being used for prognostication purposes. It was originally just a fancier deck of playing cards that appeared in Europe around the 15th century. The first documented pack was used in Italy some time between 1430 and 1450.

While there were some attempts to use the cards for divination as early as the middle of the 16th century, it was not until the late 1700s when the practice of fortune-telling with tarot cards became established, probably first in France.

Court de Gebelin, an 18th-century French clergyman, wrote about tarot cards as having ancient Egyptian origins with mystical cabalistic possibilities. This mythical link of the tarot to ancient Egypt has persisted to this day, even though there’s no real evidence for it.

Over time, a number of different decks have gained popularity, with varying Hermetic Qabalah-influenced illustrations used for a variety of occult purposes. The so-called Rider-Waite tarot deck (originally published in 1910) has arguably been the most influential, affecting the designs of most decks to come.

The way the reading works is that first the cards are shuffled, then cards are drawn and laid out in a special pattern. The reader makes sense of the relationship between the order and meaning of the cards and can inform you of past and future events or answer burning questions.

“There's something dreamy, archetypal, and intense to tarot as if it touches a part of ourselves we don't care to admit exists,” said Angelica Bastién, a tarot reader and writer, in an interview with The Week.

The images on the tarot cards do indeed have distinct archetypal value as has been noted in the work of the famed Swiss psychiatrist and founder of analytical psychology Carl Jung. It has been concluded by some that perhaps due to this, tarot has a certain therapeutic value.

Is that what drives the popularity of tarot? Why do we still cling to something that is seemingly unscientific and largely unprovable?

Tarot is one thing, but what about hypnosis? It has been in the domain of both sheer charlatans and scientists. As recent scientific research shows hypnosis has a real effect on some brains and can, for instance, help you focus better. There’s now even an app, HelloMind, that lets you hypnotize yourself.

Perhaps, there’s yet a scientific effect that can be perceived in the tarot process? A recent Finnish study found that people who believe in something supernatural, especially religious people, struggle to understand the physical world. Belief helps them fill in the blanks. The same can be true of hypnosis and tarot. They operate in a space between science and belief.

Some things will always have value, even if it goes against your knowledge and agitates your rational self. That's why atheist poster boy Penn Jillette likes to say a little prayer every now and then: