Experts assess what would happen if the U.S. and North Korea go to war. 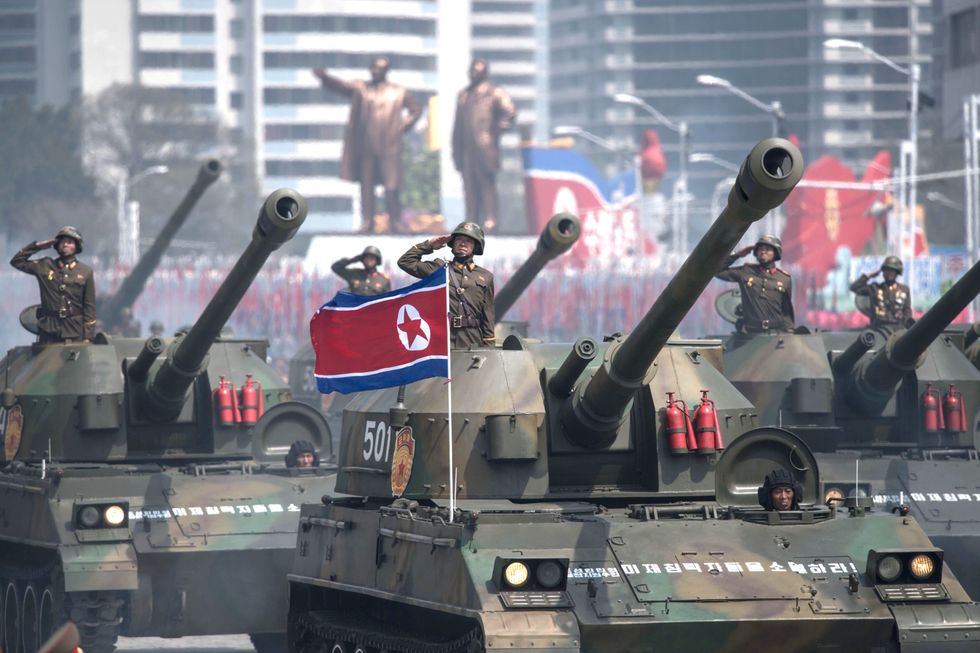 As the tensions around North Korea escalate, what has for decades been unthinkable is now suddenly within the realm of possibility. America may be on the brink of war with the international pariah nation of North Korea over North Korean leader Kim Jong-Un's nuclear weapons program. President Donald Trump has promised to rain “fire and fury” upon the stubborn foe. While cooler heads will hopefully prevail on all sides, it’s also time to consider how a war between North Korea and the U.S. would play out.

One most immediate concern for the U.S. involves announced North Korean plans plans to fire missiles into waters around Guam. It would take about 14 minutes for a missile from North Korea to reach the U.S. island territory. An altercation that could result from the missiles hitting Guam threatens to be the catalyst for escalation, perhaps not unlike the 1964 Gulf of Tonkin incident, where a U.S aircraft carrier and destroyer were supposedly targeted by the North Vietnamese. This claim was later questioned and it’s not clear if any attack on a U.S. vessel actually took place, but the event led to President Johnson asking Congress to authorize a military response, involving the U.S. deeply in a war that did not end for another decade.

To prepare for the set of missiles that could threaten Guam and Japan and could take place in mid-August, the U.S. and its allies have activated a missile defense system in the region.

Here’s how it’s supposed to work:

A focused map of the Asia-Pacific region, showing the proposed missile defense system.

If the situation worsens, what options does the U.S. have for dealing with North Korea militarily? Whatever the choices, the underlying reality is that none of them are truly satisfactory, with widespread devastation and large loss of life likely to follow. Even if the fighting won’t reach the U.S. mainland, now likely to be possible within a year, many in the U.S. armed forces stationed in the Pacific, including the nearly 30,000 in South Korea, are likely to die.

Besides Guam, a first place of attack for North Korea is likely to be Seoul, the 25-million-people capital of the U.S. ally South Korea. Even an artillery barrage here is likely to result in thousands of casualties. Any nuclear escalation would turn that into millions.

A South Korean soldier walks past a television screen showing a graphic of the distance between the Korean Peninsula and Guam at a railway station in Seoul on August 9, 2017. (Photo credit: JUNG YEON-JE/AFP/Getty Images)

A pre-emptive strike by the U.S. on the nuclear facilities and missile launchers of North Korea is a possibility, according to the national security advisor H.R. McMaster. In an interview with MSNBC, he said that in light of North Korea's military exercises and growing nuclear capability, all options are on the table.

The retired Navy captain Jerry Hendrix, a senior fellow at the Center for a New American Security, commented that the U.S. would have to conduct a simultaneous, multi-pronged attack to take out North Korea’s artillery, launch sites and nukes. He described the possible attack to include B-1 bombers from Guam, B-2 bombers from Oklahoma taking out targets from the air while the Japan-based fleet would use guided Tomahawk missiles to attack from the sea.

“That’s just for the opening move, then it gets even more complicated,” added Hendrix.

Other concurrent means would involve cyber attacks against Pyongyang’s weapons programs and the country’s infrastructure.

Even if the U.S. was wildly successful in its surprise attack, up to 200,000 American troops would be necessary to secure North Korean nuclear sites for long-term security.

Chances are, the U.S. would not succeed completely in the preemptive strike, leaving North Korea to retaliate with its remaining forces and underground assets.

“If we missed one nuke, he’s going to use it on Seoul, Tokyo or Los Angeles,” said Harry Kazianis, director of defense studies at the Center for the National Interest to the Hill. “Even if we did take the nuclear arsenal, he has something like 5,000 tons of chemical weapons.”

Add to this the fact that Chinese officials announced announced that China would fight on the side of North Korea if U.S. launches a pre-emptive strike. World War 3 would be just around the corner.

This undated picture released by North Korea's Korean Central News Agency (KCNA) via KNS on March 7, 2017 shows the launch of four ballistic missiles by the Korean People's Army (KPA) during a military drill at an undisclosed location in North Korea. Could this mean nuclear war? Photo credit: STR/AFP/Getty Images.

In an interview with CNN, Joe Cirincione, president of the nuclear nonproliferation organization Ploughshare Fund, explained the concerns about what will take place after striking North Korea.

"The problem is not hitting North Korea, its what happens next," said Cirincione. ”You strike North Korea, they are going to strike back and they have a devastating conventional arsenal built up on the border that could lay waste to Seoul," he said. "Estimates are that hundreds of thousands of South Koreans would die in the first few hours of combat -- from artillery, from rockets, from short range missiles -- and if this war would escalate to the nuclear level, then you are looking at tens of millions of casualties and the destruction of the eleventh largest economy in the world."

Could President Trump carry out a nuclear strike on North Korea if he wanted to? According to recent assessment by the Congressional Research Service, president “does not need the concurrence of either his military advisors or the U.S. Congress to order the launch of nuclear weapons.” And “neither the military nor Congress can overrule these orders.”

Not much is likely going to stop the president, explain the experts. The system is set up this way to allow for necessary quick action from the White House in case of an attack on the U.S. and to maintain civilian control over the military. If all the president's military commanders advised against a nuclear attack, they could resign, thus conceivably prompting impeachments proceedings. But even that might not be quick enough to prevent the president from launching an attack, said Steven F. Hayward, a conservative policy scholar, to Washington Post.

In the complex reality of the current situation and brewing military conflict, the U.S. must weigh its decidedly horrific options against the possible devastation once North Korea can hit the U.S. mainland with its nuclear missiles. A diplomatic solution is the only possibility that can avoid devastating bloodshed.

To reiterate that point, Defense Secretary Jim Mattis recently told Congress that ”it would be a very, very serious war.” This sentiment was echoed by the Joint Chiefs Chairman Gen. Joseph Dunford.

"I don't have any doubt in my mind, if we go to war with North Korea, that we will win the war," said Dunford in the same testimony to Congress, warning that "we will see casualties unlike anything we've seen in 60 or 70 years."

Who would really win in a war between the United States and North Korea? You guessed it - no one.