The history of the KGB and its legendary methods

The Russian intelligence agency KGB was legendary for its spycraft, violent methods, and far-reaching influence on world affairs. 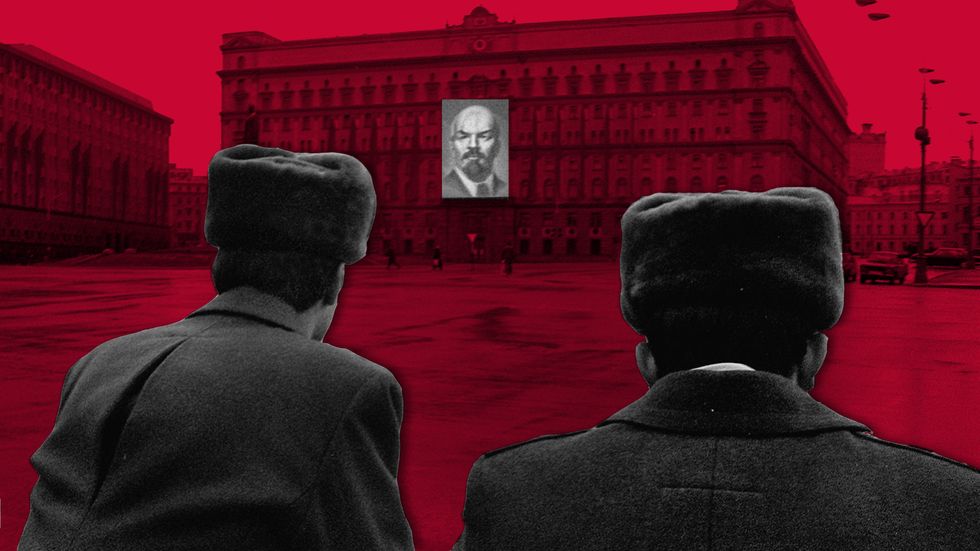 Soviet policemen standing guard in front of the KGB building in Moscow, with a portrait of Vladimir Lenin on it. (Photo: ALEXANDER NEMENOV/AFP/Getty Images)

In the annals of spy organizations, the Soviet Union's KGB has earned a mythical status. Like a combination of the FBI and CIA with a particularly Russian cleverness and harshness, the KGB was the main security agency of the Soviet Union from 1954 until 1991.

While it has now been replaced by GRU as Russia's main intelligence agency, the KGB continues to have an impact for the simple reason that the President of Russia Vladimir Putin is a former KGB agent of 16 years. It's hard to ignore the specter of the KGB when considering his dealings with the United States and the rest of the world.

Russian President Vladimir Putin during the years of his KGB training in Leningrad in the mid-1970s.

KGB stood for Komitet Gosudarstvennoy Bezopasnosti, which means 'the Committee for State Security'. The agency was at once responsible for internal security and secret policing to squash nationalism and dissent, guarding the USSR's border as well as the Communist Party leadership and the country's government. It also engaged in gathering foreign intelligence, investigations, and counter-intelligence. Despite its reach into civilian life, the KGB was considered a military service that was governed by army laws.

For its intelligence operations, the KGB's practices involved setting up both legal and illegal espionage residencies in the countries it targeted. Its spies would assume intricately plotted false identities or “legends". The details were often taken from the lives of other participants in the plot or from the identities of dead people. The KGB also placed agents in Soviet embassies and consulates, protected by diplomatic immunity. The spies engaged in gathering political, economic, and military-strategic information as well as planting disinformation.

Picture from November 1981 in Moscow shows the monument of Soviet Committee for State Security (KGB) founder Felix Dzerzhinsky, pictured with the KGB building in the background. (Photo credit: AFP/Getty Images)

As outlined in the CIA report on the “Soviet Use of Assassination and Kidnapping," the KGB resorted to “abduction and murder to combat what are considered to be actual or potential threats to the Soviet regime." Such techniques, known within the KGB as “executive action" or “liquid affairs" (Mokryye Dela), were in practice by the organization both in the USSR and abroad, striking Soviet and foreign citizens. The CIA even pinned the murder of Leon Trotsky, the co-founder of the Soviet State, on the KGB.

The CIA regarded the KGB to not only use such methods but also be very good in covering its tracks, writing that an “investigation often produces only fragmentary information, due to the KGB ability to camouflage its trail." Some assassinations ended up recorded as accidents, natural deaths or suicides, according to the report.

In many cases, hard-to-detect poison was the weapon of choice. One famous case was the poisoning of the defector Nikolay Khokhlov. He suffered a sudden and severe illness while at an anti-Communist meeting in Frankfurt, Germany in September 1957. The doctors had a hard time figuring out what happened until finding evidence of him being poisoned by a thallium derivative of arsenic and possibly other chemical agents. Khokhlov himself thought that he had been poisoned by radio-activated thallium.

The CIA would never have learned about the true causes of numerous incidents if it wasn't for defectors. For instance, in 1961 Bogdan Stashinsky defected to the West and revealed that he had carried out two assassinations for the KGB, including murdering Ukrainian emigré writer Lev Rebet in Munich with a poison vapor gun.

Training for such “executive action" operations was reportedly carried out at a base in Moscow by instructors with specialties in the use of small arms, jujitsu, wireless, code, surveillance, driving, and photography.

Besides the notorious instances of violence, the KGB was also known for utilizing a whole array of spying tradecraft, employing code names, stealing and photographing documents, using dead letter boxes or dead drops, and recruiting foreign nationals as agents like the US Navy Chief Warrant Officer John Anthony Walker and the FBI counterspy Robert Hanssen.

KGB agents were also known to become "friends of the cause" or agents provocateur, purposefully infiltrating target groups to sow dissension, disinformation and affecting their politics.

An example of an "active measures" or disinformation campaign by the KGB would be its efforts in 1959 and later which had the goal of creating negative world opinion toward West Germany. The KGB campaign involved setting fire to synagogues and painting swastika signs in public places while making it seem like the West Germans were responsible.

The KGB was also responsible for helping crush internal subversion and possible revolutionary plots in the countries of the Soviet Bloc. In 1968, it helped put down the “Prague Spring" period of liberalization in Czechoslovakia. KGB agents prepared the route for the eventual invasion by the Red Army while infiltrating the country disguised as Western tourists. They were to gain the trust and spy on the people behind the new Czech government, led by Alexander Dubček. Their goal was to plant subversive evidence that Western intelligence agencies were trying to depose the Communist government of Czechoslovakia. This, in turn, would justify the invasion by the USSR. The KGB also prepared pro-USSR members of the Czech communist party who would take over power after the Red Army's invasion.

KGB special operative Igor Morozov (left) atop an armored vehicle during his assignment to the Badakhshan province, Afghanistan. 1982-1983. Credit: Wikipedia.

Another famous instance of KGB involvement happened during the war in Afghanistan. In December of 1979, 54 members of the KGB Special Forces along with paratroopers and other soldiers managed to attack and kill the Afghan President Hafizullah Amin and 100–150 of his personal guards. This allowed the Soviets to install Babrak Karmal as Amin's successor.

The fall of the KGB While the KGB is not officially in existence, despite a 2016 announcement that it might be coming back, its influence is still felt. Almost every branch of the Russian state and many big businesses have been taken over by former KGB men like Putin, reported Politico. Vladimir Putin himself reminded the world of KGB glory during the Helsinki summit with President Trump, when he disputed the credibility of the Steele dossier by saying, "I was an intelligence officer myself, and I know how dossiers are made up."

Also of note are the tactics used by current Russian intelligence agencies like the recent poisonings in the UK that utilized the nerve agent Novichok on the former Russian spy Sergei V. Skripal, his daughter Yulia, and British citizens Charlie Rowley and Dawn Sturgess (who died). Such events provide evidence that KGB methods have not been completely retired and will continue to reappear in modern international politics.