There Actually Was a Horrible Bowling Green Massacre Involving Refugees

While Kellyanne Conway spoke of a nonexistent massacre, there was a real, historical massacre that took place at Bowling Green - in New York City. 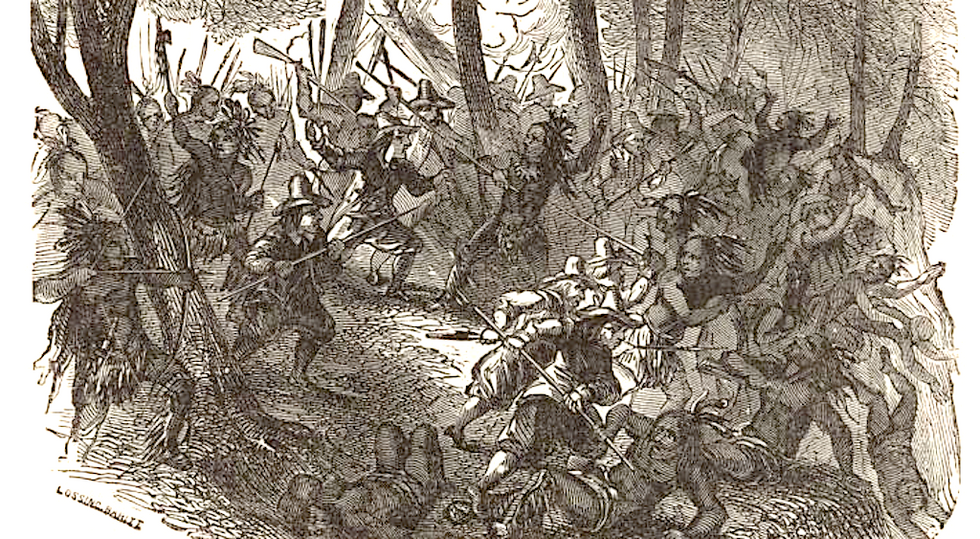 President Trump's counselor Kellyanne Conway has been taken to task for using another "alternative fact" media talking point. To defend Trump's travel ban on citizens of 7 Muslim-majority countries, she brought up "the Bowling Green massacre", a supposed terrorist act committed by Iraqi refugees in 2011. She offered it as the reason for President Obama's subsequently increased vetting and restrictions on Iraqi refugees, an action the Trump administration is using as a sort of historical parallel to its thinking.

“I bet it's brand-new information to people that President Obama had a six-month ban on the Iraqi refugee program after two Iraqis came here to this country were radicalized and they were the masterminds behind the Bowling Green massacre,” said Conway to MSNBC’s Chris Matthews.

Conway brought up this “massacre” in several interviews with outlets like MSNBC, TMZ and Cosmopolitan. The only trouble is - such a massacre did not take place. What did happen in 2011 is that two Iraqi citizens were arrested in Bowling Green, Kentucky for trying to send weapons and money to al-Qaeda in Iraq. While they presented a threat, these men did not manage to carry out any “massacre”.

“Two Iraqi nationals came to this country, joined ISIS, traveled back to the Middle East to get trained and refine their terrorism skills and come back here, and were the masterminds behind the Bowling Green massacre of taking innocent soldiers' lives away,” is how Conway presented her version of the “massacre” to Cosmo.

Kellyanne Conway prepares to appear on the Sunday morning show Meet The Press, from the north lawn at the White House, January 22, 2017 in Washington, DC.  (Photo by Mark Wilson/Getty Images)

After much outrage and ridicule, including someone managing to quickly set up a mock website to accept donations for “victims” of the “massacre”, Conway admitted she “misspoke” and tried to downplay this incident of historical inaccuracy.

But history provides an ironic extension of the story - there actually was a real Bowling Green Massacre. A largely forgotten one, probably because it involves a topic often omitted from the conversation - the past of the original inhabitants of this continent. In 1643, it was indeed a set of “immigrants” - actually the colonizing Dutch, who massacred the native population, the Lenape tribe, in the territory of what is now Bowling Green Park in New York City.

As reported by Steven Newcomb of Indian Country Today, the Dutch, who controlled the colonial area they called New Amsterdam (later to become New York), killed 30 Lenape people in the Bowling Green area on the tip of Manhattan, and another 80 in what is now Pavonia, New Jersey. The massacre was ordered by the governor of New Netherlands, one Willem Kieft, who'd been ratcheting up the tensions with the Lenape tribe that refused to pay tribute payments. Fearful of the large number of natives nearby, Kieft was building up to a war and the massacre he orchestrated precipitated just that.

On the night of February 25, 1643, a force of 129 Dutch attacked groups of Lenape refugees, who were fleeing another tribe, the Mahicans (aka Mohicans), on the tip of Manhattan and across the river in Pavonia. The Dutch slaughtered without distinction, including many women and children.

The witnesses described the horrors of that day like this, as recounted by another contemporary Dutchman David Pietersz de Vries:

I remained that night at the Governor’s, sitting up, and I went and sat by the kitchen fire, when about midnight I heard a great shrieking, and I ran to the ramparts of the fort, and looked over to Pavonia. Saw nothing but firing, and heard the shrieks of the savages murdered in their sleep. . . When it was day the soldiers returned to the fort, having massacred or murdered eighty Indians, and considering they had done a deed of Roman valor, in murdering so many in their sleep; where infants were torn from their mother’s breasts, and hacked to pieces in the presence of their parents, and the pieces thrown into the fire and in the water, and other sucklings, being bound to small boards, were cut, stuck and pierced, and miserably massacred in a manner to move a heart of stone.

Some were thrown into the river, and when the fathers and mothers endeavored to save them, the soldiers would not let them come on land but made both parents and children drown–children from five to six years of age, and also some old and decrepit persons. Those who fled from this onslaught, and concealed themselves in the neighboring sedge, and when it was morning, came out to beg a piece of bread, and to be permitted to warm themselves, were murdered in cold blood and tossed into the fire or the water. Some came to our people in the country with their hands, and some with their legs cut off, and some holding their entrails in their arms, and others had such horrible cuts and gashes, that worse than they were could never happen. (Herbert C. Kraft, The Lenape: Archaeology, History, and Ethnography, Newark, 1986, pp. 223-224)

"Massacre of Indians at Pavonia", 1643. From History of the City of New York from Its Earliest Settlement to the Present Time by Mary L. Booth, 1859 (Courtesy of the New York Public Library)

The inhuman incident united the indigenous people in the area and a full-out war broke out, known historically as Kieft’s War. It lasted over two years, with thousands dead, mostly native.

Certainly, as the episode with the nonexistent Bowling Green Massacre represents, the Trump administration will use all manner of rhetoric to support its points, invented history included. And real history unfortunately warns that stoking fears of outsiders on the basis of national security often leads to violence, with the powerful generally abusing and exterminating the weak, not the other way around.