The Worst Mass Shooting in U.S. History Was Not in Orlando

As horrific as the Orlando Massacre was, we must not forget the Wounded Knee Massacre, the single worst mass shooting in U.S. history. 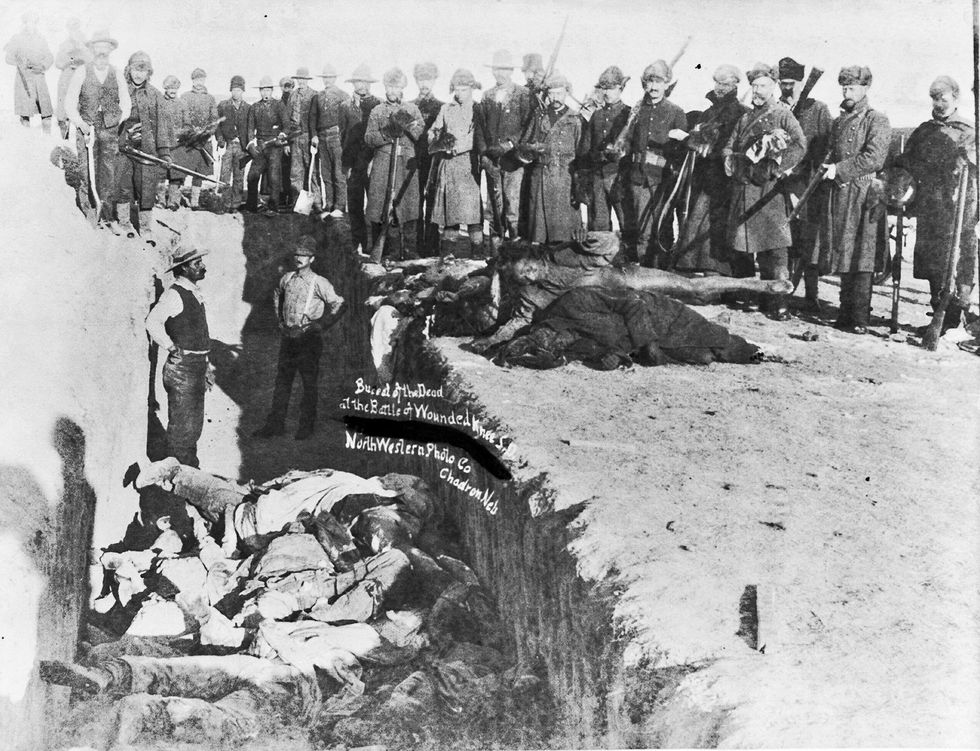 Burying the dead at Wounded Knee.

The horrific massacre of innocents in an Orlando nightclub in 2016 was a tragedy of national and international proportions. The senseless, methodical killing of people just like us, in a place where they came to relax, was an affront to our humanity and civilization.

It was immediately dubbed “the worst mass shooting in American history” by many media organizations (and our President), looking to single out this event from the almost weekly incidents of gun violence that plague the U.S.

But this kind of categorization is very debatable and has been called out for “whitewashing” history. If we mean murder perpetrated by guns, the worst “mass shooting” in American history was the “Wounded Knee Massacre” in South Dakota, when 150-300 Native Americans were gunned down by the U.S. army in South Dakota.

On December 29th, 1890, a regiment of 500+ American troops surrounded a group of Lakota on the Lakota Pine Ridge Indian Reservation in South Dakota, and ordered them to surrender their weapons.

This didn’t actually happen during a war - at this point, the Native American tribes of Lakota were living on a reservation and the decision to disarm them came from fear of the popular Ghost Dance movement.

At the heart of Ghost Dancing was a belief that a Native American Messiah would eventually rise up and return their lands to them, while the ghosts of Native ancestors would return to Earth and white men would disappear. Still, this was ultimately a dance and did not have a violent component.

Some Indian agents were alarmed that the dance would result in a rebellion against the U.S. government and led the Army into a decision that the Lakotas needed to be disarmed.

What transpired is somewhat hazy, but it’s often mentioned that a man by the name of Black Coyote refused to give up his rifle as he was deaf and didn’t understand what was expected of him. He was seized by soldiers, his rifle was discharged in the struggle, and indiscriminate gunfire ensued.

Miniconjou Lakota chief Spotted Elk (aka Bigfoot) lies dead in the snow after the massacre at Wounded Knee.

As the army regiment had a battery of four Hotchkiss mountain guns pointed at the Lakotas and superior manpower, while shooting at close range, the situation very quickly turned into a massacre.

Scores of men, and escaping women and children were gunned down within minutes. The figures vary, but respected historians count close to 300 Lakotas murdered, while it is believed many of the 25 soldiers who were killed died from friendly fire due to the general mayhem.

Of course, there are differences between what happened at Wounded Knee and in Orlando. The Wounded Knee Massacre came at the end of a protracted war with Native Americans, although it was already at a time of relative peace and the majority of the killed were innocent civilians. It’s also hard not to see the Orlando gunman (by his own pledge of allegiance to ISIS) as a deranged enemy soldier in America’s ongoing war with Islamic extremism.

One other inescapable point of comparison is that the Wounded Knee Massacre came as a result of disarmament efforts by the government army.  This feeds into the extreme end of the ideology behind some 2nd Amendment advocates - one day the government will come for their guns and establish a tyrannical order.

Certainly, even to such a stance it can be argued - the government will always have superior firepower (like in the case of the Hotchkiss guns) and whatever the legitimacy of its motivation, fighting back will not end well for civilians. So who will be stopped by their guns other than innocents?

People look on during a vigil in reaction to the mass shooting at a gay nightclub in Orlando, Florida, in New York on June 12, 2016.  (Photo credit - BRYAN R. SMITH/AFP/Getty Images)

While the Orlando massacre is already being used for political positioning, based on which side of the gun violence / “immigrants are dangerous” debate the demagogues choose, the question remains why the Wounded Knee Massacre has been ignored by the media.

Of course, some media organizations, like NPR here, have tried to justify their headlining by reasoning that what happened in Orlando feels different. The nightclub shooting was perpetrated by a single person, in a public space, and as such falls into what we have now come to expect from a mass shooting. NPR even had an expert weigh in.

Grant Duwe, who wrote about the history of mass murder in the U.S. opined:

So, sure, media outlets like NPR can be made to feel good about their choices to neglect the fuller picture of the country’s history, but are they right? Their own expert essentially says that what we did to the “have nots” - in the case of Wounded Knee, the Native Americans, does not rise to the level of current media attention. All that matters is how we, the modern inhabitants of this country, are made to feel by those who hate us. It’s hard not to see “whitewashing” in such logic.

A man lays down 50 roses to honor each victim of the gay Orlando night club shooting as people gather outside of the Stonewall Inn as a vigil is held following the massacre that occurred on June 12, 2016 in New York City. (Photo by Monika Graff/Getty Images)

Or perhaps, it’s just a cynical branding effort. The ‘worst mass shooting ever” boggles the mind of a populace which sadly has come to expect and ultimately quickly forget such events.

Let us call a spade a spade. Every opportunity to own up to our history and get a full accounting of what has made our country what it is, will allow us to make the right choices going forward. Choosing to ignore our complicated history with minority groups while looking to oppress others will continue to shore up the fractured and schizophrenic American psyche that explodes in violent episodes way too often.