NASA scientists discover what two places in the solar system might have favorable conditions for alien life. 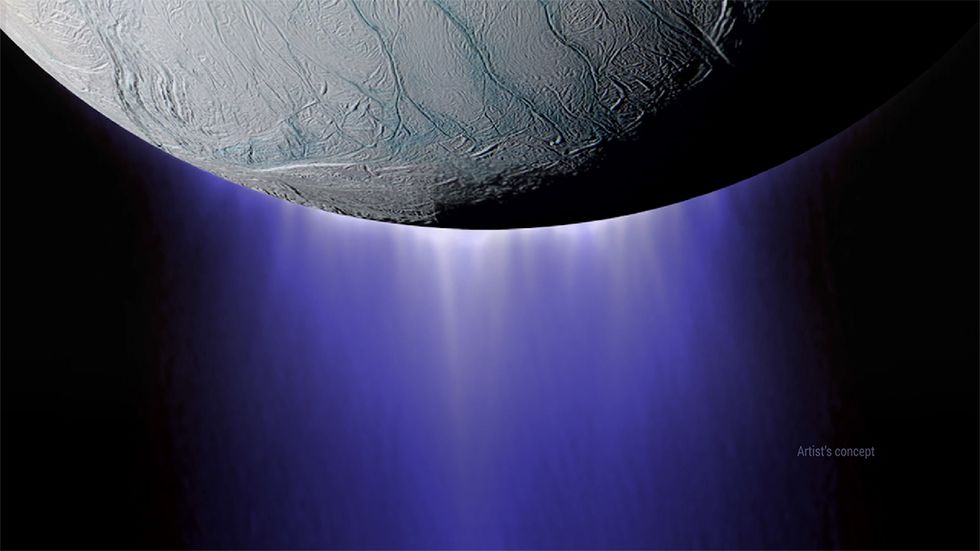 An illustration of an image from the Cassini spacecraft of Enceladus' south pole, showcasing its icy plume. Credits: NASA/JPL-Caltech

NASA scientists announced its Cassini spacecraft found evidence that the ocean on Enceladus, one of Saturn’s 62 moons, may contain all the ingredients necessary for the emergence of life.

Cassini flew through plumes of gas bursting out from under the ice covering the oceans and detected a clear presence of molecular hydrogen. This might indicate the existence of hydrothermal vents on the moon’s ocean floor. Such vents would be similar to Earth’s hydrothermal vents where some scientists believe life on our planet originated.

In the new findings, described the journal Science, scientists consider the possibility of a chemical reaction called methanogenesis taking place in the moon’s underwater vents. This reaction has been shown to be crucial to the development of microbial life by providing an energy source for the microbes.

The researchers cannot at this point conclusively state if methanogenesis is indeed taking place under Enceladus’s ice. It is also possible that this moon may be too young to have undergone the life-creating process.

“Although we can’t detect life, we’ve found that there’s a food source there for it. It would be like a candy store for microbes,” said the study’s lead author Hunter Waite of the Southwest Research Institute in San Antonio.

This is how Cassini scientists think water interacts with rock at the bottom of the ocean of Saturn's icy moon Enceladus, producing hydrogen gas. Credits: NASA/JPL-Caltech

"This is the closest we've come, so far, to identifying a place with some of the ingredients needed for a habitable environment," stated Zurbuchen.

Since 2004, the Cassini spacecraft provided no shortage of discoveries. As its head of imaging science Carolyn Porco explained, Cassini conducted over a 100 more “close flyby maneuvers” than have been done so far in the entire planetary program.

It has given us an unprecedented understanding of Saturn, with stunning new images, insights into its rings, atmosphere and moons.

In 2005, the spacecraft landed the Huygens probe on Titan, Saturn’s largest moon, a historic first for landing human machines in the outer solar system. The probe discovered a wealth of information, including an underground super-salty ocean. The Cassini-Huygens mission was carried out in cooperation between NASA, the European Space Agency and the Italian Space Agency.

Here’s a film made by compiling imaging data from Cassini and the probe’s instruments as it descended towards Titan:

Cassini also came amazingly close to Jupiter, providing us with the best photos we have of the gas giant.

The spacecraft will be decommissioned on September 15, 2017 by being plunged to burn in Saturn’s atmosphere. The reason for just a drastic demise lies in the fear that Cassini will soon run out of fuel and crash into one of Saturn’s moons, the ones we now think may contain life. It’s safer for it to burn up on entry than possibly contaminate the moons.

On its way down, the spacecraft will transmit more data and images. These will include new maps of Saturn’s magnetic and gravity fields, and details on the composition of the planet’s rings.

"It’s inspiring, adventurous and romantic — a fitting end to this thrilling story of discovery," wrote NASA.

Notably, another NASA team just published findings on a different ocean world that might have some form of life. Their paper on observations from the Hubble Space Telescope program showed new evidence of water vapor plumes found on Jupiter’s moon Europa. In fact, they think they spotted a huge 62-mile-high plume over Europa’s equator, in the same place a plume candidate was spotted in 2014.

These warm plumes are thought to be potential hosts for life. Considering that Europa is billions of years older than Enceladus, the chances for life to have emerged there could actually be greater.