The thick sheets of ice at these eight sites could provide the reservoir of water necessary for human expeditions to Mars. 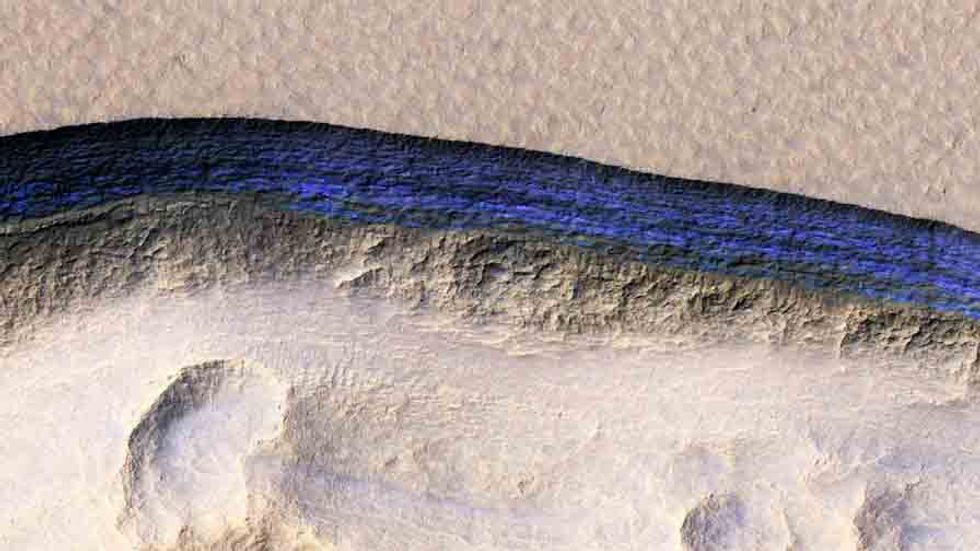 The ice layer found in one of eight sites on Mars. Credit: NASA/JPL/UNIVERSITY OF ARIZONA/USGS

For any future mission to Mars, finding water is critical. No one is holding their breath that they will find a lake of Evian bubbling up, but now scientists found what may be the next best thing—a clear view of several layers of water ice deposited right under the surface. NASA scientists used HiRISE, a powerful camera installed on its Mars Reconnaissance Orbiter (MRO) to make the discovery of the ice in the faces of eroding slopes.

In a study published in Science magazine, researchers showcase details of eight regions of Mars in both northern and southern hemispheres where erosion left bare, large cross-sections of thick ice underneath. The exciting part of the find is not just the large amount of ice itself but how accessible it is. Some of the deposits are just one meter below the surface, while others extends up to 100 meters deep. We are talking a 100-meter-thick chunk of ice that can be converted into water.

The discovered ice likely started out as snow long ago. The scientists think the deposits are pretty pure water ice—a boon for future exploratory missions. The exposed deposits are capped by a layer of one to two yards of ice-cemented rock and dust.

The study’s lead author, Colin Dundas of the U.S. Geological Survey's Astrogeology Science Center in Flagstaff, Arizona, explained that the researchers were able to achieve an unprecedented level of detail in their study.

“There is shallow ground ice under roughly a third of the Martian surface, which records the recent history of Mars,” said Dundas. "What we’ve seen here are cross-sections through the ice that give us a 3-D view with more detail than ever before.”

The co-author of the report, Shane Byrne of the University of Arizona Lunar and Planetary Laboratory, Tucson, was equally enthusiastic about their accomplishment:

“The discovery reported today gives us surprising windows where we can see right into these thick underground sheets of ice," said Byrne. ”It's like having one of those ant farms where you can see through the glass on the side to learn about what's usually hidden beneath the ground."

The big takeaway from the find is that we now know at least eight sites where underground ice is accessible, providing a potential reservoir of water, necessary for human expeditions to the planet. Byrne joked that now it’s enough for astronauts to go to Mars with just “a bucket and a shovel” and they’ll have all the water they need. It will probably need to be separated from debris that ended up in the water over time, but you can make it work, say the scientists.

Since the locations of the sites are in the upper mid-latitudes of Mars, meaning that the temperatures get extremely low there, the scientists continue their search for more-landing friendly water spots.

You can read the study in Science magazine here.