It illustrates the dangers of rip currents. 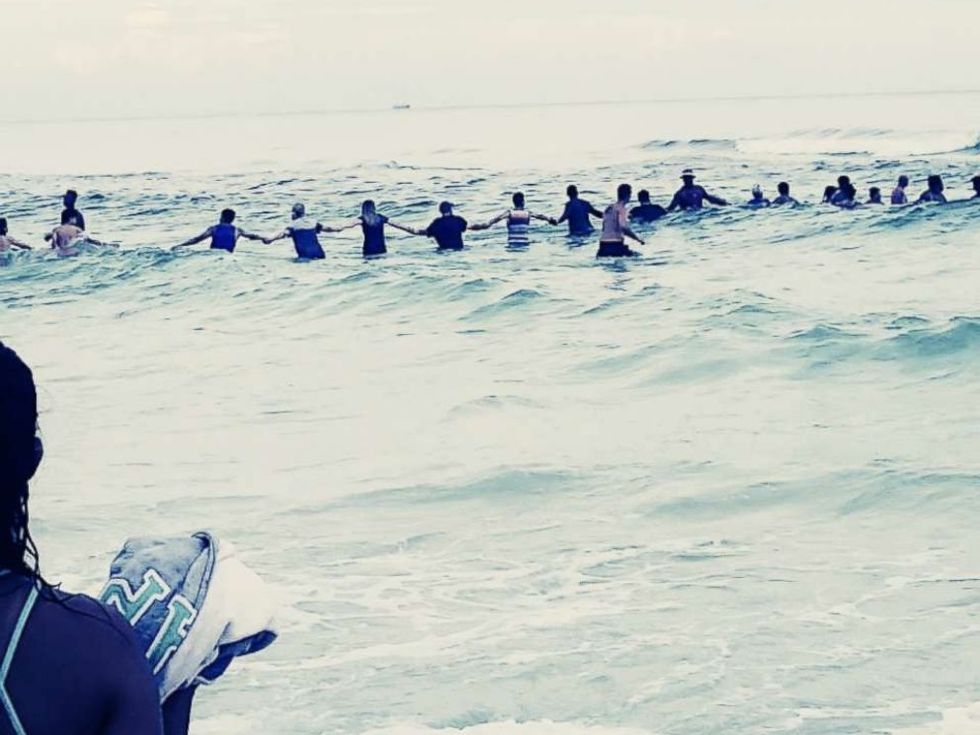 A Saturday evening outing on a Panama City Beach took a grave turn when Roberta Ursrey noticed that her two young boys, 8 and 11, were boogie boarding much farther away when she last saw them. And then they started to scream and cry that they were stuck. A rip current was holding them and others hostage in about 15 feet of swirling water. Among them also were an elderly Chinese couple and a woman who first came out to help the boys and also became trapped.

Ursrey was warned against going out to help her sons, but she, her husband and her nephew swam out, trying to save them. Unfortunately, they too got caught by the treacherous rip current. Ursrey's 67-year-old mother, who also rushed out to the rescue, suffered a massive heart attack during the horrid experience, nearly dying.

I honestly thought I was going to lose my family that day," Ursrey said in an interview with Northwest Florida Daily News. “It was like, 'Oh God, this is how I'm going.'

But, thankfully, that's not what happened. Jessica and Derek Simmons came out to have a last-minute dinner on the beach and noticed a commotion. People were pointing to what Jessica first thought what was a shark. When she realized what was really happening, Jessica, who is a strong swimmer, grabbed a boogie board and rushed out to help.

These people are not drowning today," Simmons recalled saying to herself. "It's not happening. We're going to get them out."

In the meantime, her husband and a few others started to organize a human chain. It soon grew to over 80 people, stretching more than a 100 yards out to the swimmers in the rip current. Simmons paddled past the chain, first coming across Roberta Ursrey, who was in a terrible state after drinking too much water.

"When I got there, there was 2 small children, a mother, a grandmother, a older son and a Chinese couple telling me they was so tired, that they just couldn't do it anymore. They tell me to save the kids first, so I gave the little boy a boogie board and told the mom to hang on to it," wrote Jessica Simmons on Facebook.

All the caught swimmers were getting very tired, so Simmons, her husband and a few others started to tow them to the human chain, which then pulled them all the way back to shore.

Ursrey blacked out as she was being pulled to safety, while her mother had a heart attack, still in the water. She told the rescuers to “just let her go" and save themselves.

"That's when the chain got the biggest," Ursrey said to the Washington Post. "They linked up wrists, legs, arms. If they were there, they were helping."

It took almost an hour, but everyone was saved. The beach broke in applause as the last stranded swimmers came back on the shore.

Ursrey's mother is still in the hospital after coding in the ambulance. Ursrey expressed how she felt towards the people who helped them:

"I am so grateful," Ursrey said. "These people were God's angels that were in the right place at the right time. I owe my life and my family's life to them. Without them, we wouldn't be here."

This story of basic humanity and selflessness in helping others in distress is sure to resonate in these times of divisiveness and rancor. As many on social media have already expressed, this near-tragedy was prevented by a growing group of strangers who happened to be on the beach at that time. Didn't matter if they were Republicans or Democrats. No racial, religious or national divisions. Even people who couldn't swim themselves stood up to their necks in the water, trusting their fellow men to hold on to them, while trying to save others.

"To see people from different races and genders come into action to help TOTAL strangers is absolutely amazing to see!! People who didn't even know each other went HAND IN HAND IN A LINE, into the water to try and reach them. Pause and just IMAGINE that," wrote Jessica Simmons in her Facebook post.

Getting some early flack are members of law enforcement who were apparently present at the scene but chose to wait for a rescue boat. Simmons noted her disappointment that they didn't help in the human chain either.

Despite that, the emotional story has a happy end and demonstrates the need for beachgoers to know more about rip currents.

Rip currents are strong, narrow currents within a surf zone that move quickly away from shore. They can extend out up to a 100 yards and reach speeds of up to 5 mph. It's like a river running out to sea, cutting through the breaking water. Clearly that is a dangerous situation to find yourself in and people often panic, making decisions that exacerbate the problem. Such currents kill up to a 100 Americans every year, while nearly 50,000 get rescued by lifeguards.

They often occur after a storm, being strongest at low tides, but can happen at any times. The most powerful current can pull at 8 feet per second — the pace of a world-record Olympic freestyler.

Scientists have made many advancements in the past decade in studying rip currents, relying on new technology like GPS-equipped drifters that can be tossed in the surf. These drifters can track rip current movement and speed with precision.

Check out this video on rip current science, including the telling footage by scientists from the UNC Coastal Studies Institute, who used fluorescein dye to track the currents in a surf zone:

If you are trapped in a rip current, it is generally recommended to not counter the current by attempting to swim straight back to shore. This increases the risk of drowning due to fatigue. Instead, the National Ocean Service recommends swimming parallel to the shore and then, once you're out of the trap, start going back ashore at an angle.

Controversial new research by rip current expert Jamie MacMahan also says that struggling against the current may be counterproductive. He argues that a swimmer doesn't really know which way the current is flowing, taking a 50/50 chance to be swimming against the current if choosing the wrong direction. He recommends just floating, saying that in a few minutes, the swimmer will generally float back to shore. This advice has some detractors, however, who find the approach akin to giving up and potentially being more deadly.

Here's a video from Australian scientists on how to survive beach rip currents: