A new study of the stone monuments on Easter Island reveals the mysteries of the ancient people who made them. 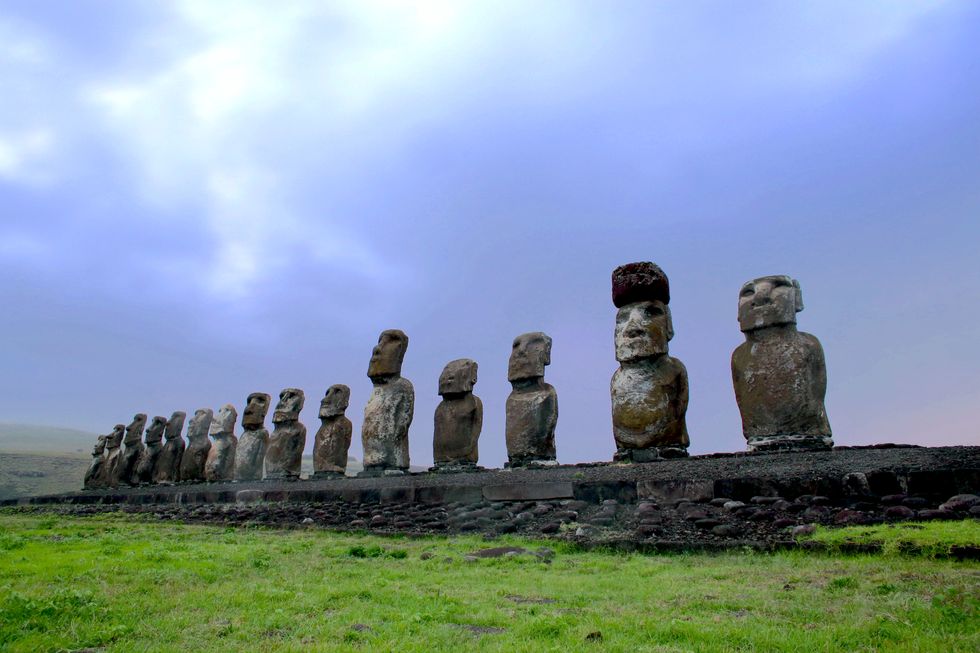 View of Moais -- stone statues of the Rapa Nui culture -- on the Ahu Tongariki site on Easter Island, 3700 km off the Chilean coast in the Pacific Ocean, on August 12, 2013. (Photo credit: GREGORY BOISSY/AFP/Getty Images)

Easter Island is one of the most mysterious places on Earth, largely due to the strange art left behind by its ancient inhabitants. This remote Chilean island in southeastern Pacific Ocean is home to 887 monumental stone statues or Moai, created by the Polynesian Rapa Nui people who used to live there.

The questions about the statues have always abounded - why do they all look like giant heads, what do they mean, and what happened to the people who made them.

Another mystery - how were the monoliths moved up to 11 miles from the quarry where they were carved, seemingly without using wheels or larger animals.

Over the years, scientists have proposed some explanatinos for the unknowns.

The statues, carved from volcanic rock between 1000 and 1680 AD, seem to be honoring Rapa Nui ancestors, watching over their activities as they are turned away from the sea and towards the villages.

Interestingly, while they are popularly identified as gigantic heads, the statues actually have bodies. Most of their torsos end up at the top of the thighs, while some are complete kneeling figures.

As far as how the statues were moved, it was possibly accomplished by utilizing special sledge devices or attaching ropes and walking them to their destinations by rocking and pulling.

Now a new study contributes a twist to our understanding of the Rapa Nui - the people who left us these immense reminders of their time on Earth. They were commonly viewed as having a warrior culture, but an analysis of the large cylindrical stone hats, known as pukao, which top some of the statues, showed that the Rapa Nui had instead a supportive and inclusive community.

Professor Carl Lipo from Binghamton University and a team of researchers looked at 70 multi-ton hats strewn around the island. They used photography and 3D computer models to discover that the hats had many more drawings or "petroglyphs" than previously observed.

"The diversity of the petroglyphs challenges that these were symbols of warfare between groups," said Lipo to Newsweek. In fact, the findings exhibit "quite a bit of diversity in the petroglyphs of the pukao—more so than have been traditionally noted given that we documented all the pukao surfaces."

What the drawings also reveal is that there was clearly a sense of cooperation and community that was fostered among the Rapa Nui, according to Lipo.

"These monuments represent the result of communities working together and clearly had tremendous positive value," Lipo explained. "As we've learned more about the nature of the resources on the island that are needed for community survival, we see that sharing and cooperation was a key factor ... The pukao data are another piece of the broader puzzle that we are assembling for the island."

Check out the new study in journal the Advances in Archaeological Practice.