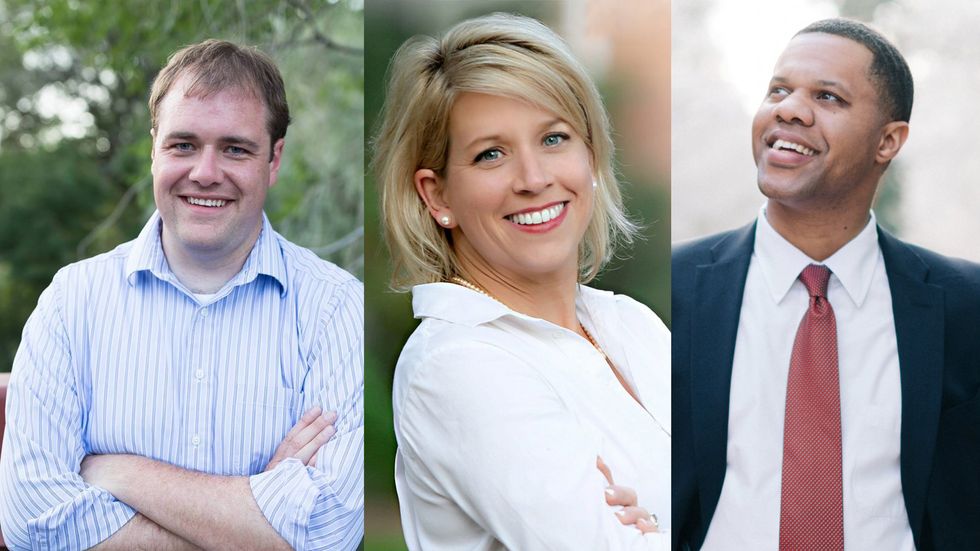 Science Debate, a nonpartisan organization which seeks to get candidates, elected officials and the public to discuss vital science policy issues, has released some answers to its 10 Science and Technology Questions for 2018. The mission of Science Debate, as stated by its Executive Director Sheril Kirshenbaum in Scientific American, is to prepare politicians “ to meet the 21st centuries greatest challenges on day one. “ Science Debate believes that “democracy works best when the people are well informed about candidates’ positions,” wrote Kirschenbaum.

How are the candidates faring so far? While answers are still coming in, here are some highlights up to this point:

1. Joseph Kopser, Congressional candidate (D) in Texas’s 21st district, thinks that science has been a great boon to humanity.

"Every facet of quality of human life has been improved through scientific inquiry and technological advances,” said Kopser. To devalue the concept of objective reality and to demean or obstruct scientific inquiry… is a certain path to slamming the brakes on human progress."

"Building an economy of innovation must include support for science and technology,” said Moro. “Developments in healthcare, biotechnology, robotics, cyber security, energy research, artificial intelligence, information technology and advances in manufacturing, all add jobs and strengthen our economy.”

3. James F. Henry, Congressional candidate in Florida’s 11th district, believes that humans are behind climate change, saying this “should not be a debate”. He adds that even if there are some natural forces at work as well, we need to enact “common sense policies” to protect the environment.

“It may very well be true that there is a natural ebb and flow to the level of warmth of our planet, but just because such changes occur naturally does not mean that humanity, by its mere presence, cannot impact it as well,” said Henry. “We need common sense public policies designed to minimize the damage our existence causes on the world around us, and to mitigate the effects for which we are responsible. This is to the benefit of everyone.”

4. Jeffrey Payne, Gubernatorial candidate (D) from Texas thinks that politicians should not be telling scientists how to do their job simply because of their beliefs.

”Politicians have no business trying to control scientific inquiry simply because the outcome might disagree with their beliefs,” said Payne. “Scientists should be free to pursue and report their findings without fear of reprisal by politicians."

5. Chris Richardson, who is running as a Congressional Candidate from the Green Party for California’s 7th district, gave a pretty thorough answer about why we should colonize the moon, saying we should definitely do so before Mars. He imagines moon colonizers would turn its lava tubes into dwellings.

“Going to Mars before settling the moon is foolhardy,” said Richardson. “Everything going to Mars will have to be lifted out of the earth’s gravity well. By settling the moon, we can build mining and transport on the surface of the moon in its shallow gravity well and the lack of an atmosphere works in our favor. Materials can be launched from the surface of the moon with nothing more than a solar driven catapult. Raw ore and manufactured good can be launched off the surface with ease. There is never a cloudy day on the moon and solar panels work very well in a vacuum. The shallow gravity well and lack of atmosphere means that we can launch from the moon with a mass driver, an electric catapult. Fine tuning and meteor deflection can be done from the surface of the moon.”

“As a public school teacher, I teach STEM in my classroom, and recognize the importance of good, sequential STEM programs in school,” explained DeCillis. “We can ensure that students receive good STEM education by ensuring we hire, and retain qualified teachers; make sure states are implementing a sequential STEM program from kindergarten through high school that demonstrates vocational links to the material; and by providing funding for labs and equipment. We should also ensure that these programs are funded universally-that all school districts, regardless of location or socio-economic condition, meet minimum STEM standards, to give all public school students the access and opportunity to learn, and apply STEM principles.”

7. Paul Tonko, who is running for re-election to Congress as a Democrat in New York’s 20th district, addressed the question of how he could forest a culture “that respects scientific evidence and protects scientists” by referring to his efforts to do so through the legislature.

“The continued denial of climate change and other science-backed findings by those in charge of policy that affects the lives of arguably everyone on the planet is alarming to say the least, “ said Tonko. “That’s why introduced the Scientific Integrity Act this Congress. The bill would establish a standard for scientific integrity policies across the federal government, empowering science watchdogs at each relevant agency to maintain a firewall between scientific findings and political or special interest meddling.

8. Tom Taylor, running for Congress in Utah’s 4th district as a Democrat, advocates for strong encryption as the first necessary barrier in a fight against cyber attacks.

“Protecting our privacy and our data will grow increasingly important in the coming years,” said Taylor. “This starts with employing strong encryption into the technologies we use. We should demand end-to-end encryption of the private companies that offer services on the Internet. So-called “backdoors” to encrypted information make us all less secure by providing an entryway to our data that can be exploited for nefarious means. Finally, we should embrace open source software which allows for code to be continually vetted by the community and leads to the plugging of security risks much quicker.”

9. Mike Clark, running for Congress as a Democrat in Texas’s 31st district, has roots in agriculture and wants to encourage locally sourced food.

“Farming is becoming cool again!” said Clark. “I am encouraged that more millennials are starting up farm businesses. Let’s also encourage locally sourced food and make it easier for consumers to access. It’s good for our local economy and good for our health. This is where Congress needs to update our agricultural policies for a sustainable 21st century farming era. It is no longer the 1930’s! My ranching and farming family members would have never grown or raised anything that they would not have consumed themselves. The same can be said for our local farmers. If we live and work in Williamson and Bell County of Texas, then there’s no reason why we can’t easily enjoy the same great foods grown here as well.”

10. Richard L. Watkins (D), running for Congress in North Carolina’s 4th district, has a PhD in Microbiology and Immunology with a specialty in Virology. He responded to a question on his mental health policies by stating unequivocally that “healthcare is a right” and that mental health should be covered under universal healthcare.

“Mental health IS health and thus will be covered under universal healthcare,” said Watkins. “ Healthcare is a right, and I fight for the rights of Americans. I want to work to end our failed war on drugs and redirect those funds ($1 trillion over the course of 40 years) to our poorly funded mental health care infrastructure."

Millions of good, hardworking Americans are living, thriving and often suffering with mental illness, thus making its heavy stigmatization an American tragedy. As a member of Congress, I will support the passing of bills that protect the rights of those with mental illness as well as fight for a better-educated public, so that as a society we can help make support more accessible.”