The Thing That’s Annoying You Isn’t Necessarily the Problem

Irritation is a powerful force. It has the whiff of righteousness. 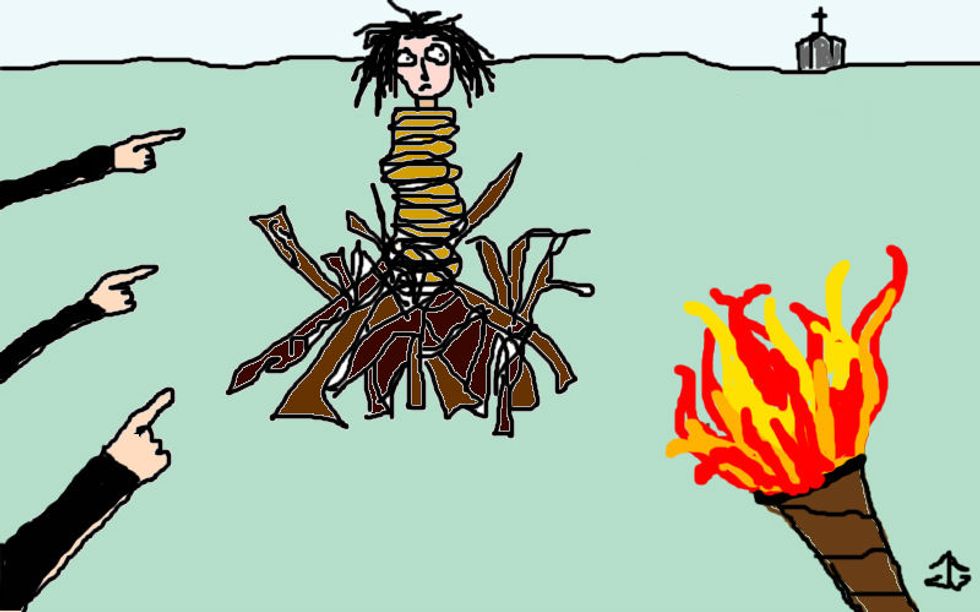 The other day a decision tree was going around on social media. It was comedy: a European perspective on whether or not men should wear shorts (punchline: No, we shouldn’t.) It asked questions like: "Are you at the beach?” and answered them with snappy rejoinders like, "Then cover your damn legs!"

This was clickbaity fluff, good for a snort, and pretty forgettable. A few weeks before that, there was a widely read piece in The New York Times in which an acclaimed fashion critic (whom I’ve never heard of, but what would I know of acclaimed fashion critics?) used similar rhetoric about winter coats: "Are you skiing? No? Then go get a stylish trench coat like in Mad Men." Personal Bias Alert: Early this past winter (prior to reading this bit of snark), I briefly tried a return to the Judd-Nelson-in-The-Breakfast-Club trench coats of my youth. The result? I was totally effing freezing. So I bought a ski jacket. Now, in winter, I will be the warm, comfy guy in a ski jacket imagining that, wherever I go, I am being silently judged by eminent fashion critics.

These two are not isolated examples. I see a lot of this in online discourse these days, and since it no longer quite makes sense to distinguish media outlets as "respectable" vs. "trashy," it makes sense to take a closer look at the power and the nature of this rhetorical form whereby an attitude pretends to be a conclusive argument.

It’s interesting to note, too, that most attitudes disguised as arguments seem to be the result of unexamined irritation in the arguer. For example, I am not crazy about people eating on the subway. For some reason, I just don’t want to watch you eating in that enclosed space. But am I going to go write an article against “these pigs” who eat on the subway? Hell, no. Why? Because I can’t really think of a rock-solid logical argument to support my irritation and my right to tell you where you may and may not eat your lunch. Yes, the space is tight, but it’s not like you’re dropping food on me. Rats are not scurrying around your feet. Many other online writers do not, however, share my reticence and will happily dash off “5 Reasons Your Nasty Lunch is Grossing Me Out on the Subway.”

Irritation is a powerful force. It has the whiff of righteousness. It inspires dread in the meek. If you read old accounts of any society that eventually erupted in some form of ethnic cleansing or witch-hunting, you’ll hear people gossiping and commiserating about the annoying habits of the marginalized group, nodding their heads in agreement about the ways in which these people obviously don’t “get” the rules of society that are perfectly obvious to anyone with common sense.

Call me old-fashioned, but even if your editor is leaning over your shoulder demanding that you churn out this manipulative crap, I think you should probably resist. Words have power, and the line between opinion and fact is not nearly so clearly demarcated as it once was. So when your rhetoric suggests that something you’re saying should be completely obvious to anyone who isn’t an idiot, you’re basically bullying people into agreeing with you.

The counterargument, of course, is that educated readers are supposed to be skeptical and think critically about things like the rhetoric that writers employ to manipulate them. Caveat emptor. And for sure we ought to be educating people not to be passive consumers of everything they read or hear. But a) even the most highly attuned readerly apparatus can’t completely short-circuit the deeper, darker forces of the psyche — fear, insecurity, the desire to be part of the in-crowd. So a smart reader faced with an unrelenting barrage of bullying headlines is likely to become either a neurotic wreck or a total cynic. And b) why would we want to absolve writers of all responsibility for talking meaningfully and advancing sound logical arguments? We all know everyone on the internet is scrambling to grab attention — that digital media’s very survival depends on clicks and likes and shares — but why should we in our role as consumers of this “content” enable (and hasten) our collective rush to the bottom?

Anyway, so, Judgy Decision Chart, I say unto you: Summer is upon us and I’m wearing some damn shorts. I shall proudly display my hairy, pasty legs and knobbly knees because New York in summer is like a freakin’ sauna and I value not being miserable. And I’ll be honest: I can’t help hating you a little for making me secretly wonder, even for a moment, whether I’m the only one in New York who didn’t get the memo.

Annoying as I may find you though, know this Judgy Decision Chart: Should you roll up in some chinos and docksiders and a Nantucket Red™ pre-faded polo with the collar turned up and a pair of Ray-Ban aviators perched atop your head, you can count on this: I’ll do you the basic human courtesy of not writing an article denouncing you for it.