People in the City Are Too Damn Close Together

Urbanization is increasing rapidly, worldwide. It's good for innovation, but is it good for people? 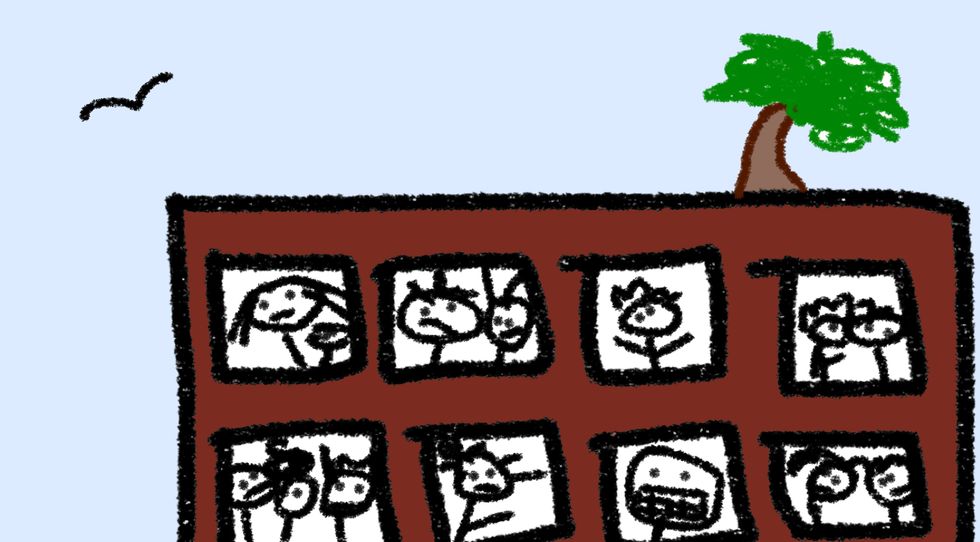 I’ve lived in New York City for most of my adult life, and also, briefly, in Washington DC, Jerusalem, and Santa Fe, New Mexico. I like cities. Ever since I was 18 and set foot for the first time in the East Village, navigating the treacherous basement stairs down to Trash on Vaudeville to ogle the dazzling array of Doc Martens, I have known that this was where I belonged –– among the jumbled mass of cultures and languages and smells of world cuisines vying in my nostrils for primacy. The city was where the music was. Where random encounters could change your life forever. In my early days at NYU I wandered the streets reading signs into everything — interpreting the personal significance of some pages of Poe I found ripped out of a book, say, or of a single playing card lying in the gutter. I was dazzled by the chips of glass some enterprising contractors had sealed into some concrete sidewalks so that at night in the streetlamps they glittered like stars.

More than two decades later, one thing has become abundantly clear: People in the city are too damn close together. And nowhere is this more evident than in two places: on the subway and here, on the OpinioNet.

I offer the example of a close friend, a quiet, intelligent, rational person of almost supernatural patience and cool. We were sitting together one day on the subway when a homeless person entered the car from another car. He was loud, abrasive, making a pitch that he’d clearly recited so often that it had become a kind of incantation: I AM HOMELESS AND HUNGRY. I DO NOT PERFORM TRICKS OR MUSIC, BUT I AM ASKING YOU FOR YOUR HELP. PLEASE IF YOU HAVE ANYTHING TO SPARE, A SANDWICH OR ANYTHING I WILL HAPPILY ACCEPT IT. I AM HOMELESS AND HUNGRY.

“SHUT UP!!! SHUT UP!!!” my normally stoic friend was shouting. She stopped. We looked at each other in stunned amazement. What had just happened? A normally compassionate person fully capable of understanding the horror of homelessness and generally wishing homeless people only the best, was freaking out like some entitled, victim-blaming fascist. Unpacking this later, we realized that my friend’s nervous system had just reached some kind of momentary breaking point, like that of the rats in the famous experiment who, packed too close together in their cages, became murderous and insane.

Another example: I was on a bus in Jerusalem, chatting with friends, when I felt a tap on my shoulder. I turned around to face an elderly lady yelling: “SHUT UP!!! SHUT UP!!! I AM NOT INTERESTED IN YOUR STORIES!” Pure, wild-eyed hatred: that’s all I saw in the face of this otherwise respectable Israeli senior citizen. “What stories?” I muttered peevishly. “I wasn’t telling any stories...” and turned back around, sinking a little lower in my seat.

This year, the Oxford English Dictionary added the word manspreading to its omnipendium of our language. For the uninitiated (if you exist among my readers), manspreading describes the presumably predominantly male behavior of sitting on public transportation with one’s legs spread wide apart, taking up more than one seat. It is part of a broader feminist online discourse about male entitlement, which also covers such acts as “mansplaining” (e.g., a tweet I saw yesterday whose author wondered whether Ryan Adams was “mansplaining” Taylor Swift’s 1989 album by covering it in its entirety).

I am a man, and therefore not entirely objective when it comes to these issues, but I will say this: A world in which people are not squeezed ridiculously close together on subway cars is a world in which anyone, male or female, can spread his or her legs as far apart as they want without trending on Twitter or getting a new word added to the OED on their behalf. And while etiquette is very, very important, and I would never, ever suggest that people in the city should rebel against these constraints on their freedom (Hey, man, you chose to live in a city. Social contract, etc.), a world in which we are spaced far enough apart that there’s no reason to microblog about each other’s annoying tendencies sounds like a more peaceful world to me.

The OpinioNet is particularly prone to these kinds of spats (or cultural discourses, if you like) because it is populated by highly critically attuned English majors crammed very, very close together both online (in chat rooms, on Twitter) and off (in the cities we all live in). But hypercritical or not, we all go a little crazy when the basic things we feel entitled to, like not getting elbowed in the back or finding a stranger’s armpit in your face at 6:30 a.m., can no longer be taken for granted. We get sick of each other. We suffer compassion fatigue. And this, I think, can have serious consequences, not only in comical outbursts like those I’ve described above, but also in terms of our ability to respond wisely to things like the refugee crisis in Europe or the growing rich-poor divide. And with more than half of all humans currently living in cities, and this percentage rapidly increasing, we’re going to need to find better ways to live all squeezed together like this unless we want to find ourselves screaming “SHUT UP!!! SHUT UP!!! I’M NOT INTERESTED IN YOUR STORIES!!” at each other forever on a global scale.

--
@jgots is me on Twitter
You might also like our podcast, Think Again, where we surprise smart people with unexpected ideas. George Takei, Henry Rollins, Bill Nye, and more have been on. Salman Rushdie's joining us this coming weekend.
overthinkingeverything