The study authors compared data taken from 3,715 members of the American Mensa Society (people who have scored in the top 2% of intelligent tests) to data from national surveys in order to examine the prevalence of several disorders in those with higher intelligence compared to the average population. 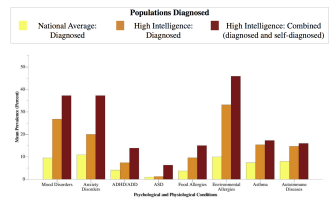 The researchers turned to the field of psychoneuroimmunology (PNI) to look for some of the answers. PNI examines how the chronic stress accumulated as a response to environmental factors influences the communication between the brain and the immune system.

The researchers point out that highly intelligent people have tendencies for “intellectual overexcitabilites” and a hyper-reactivity of the central nervous system. On the one hand, this gives people with high IQ heightened awareness that helps their creative and artistic work. In fact, the field of cognitive ability recognizes one aspect of highly intelligent people to be “a broader and deeper capacity to comprehend their surroundings.”

This hyper-reactivity, however, can also lead to deeper depressions and poor mental health. This turns out to be particularly true for poets, novelists and people with high verbal intelligence. Their intense emotional response to the environment increases tendencies for rumination and worry, both of which predict depression and anxiety disorders.

Heightened psychological responses can affect immunity, write the researchers. People with overexcitabilites may have strong reactions to seemingly harmless external stimuli like an annoying clothing tag or a sound. This reaction may turn into low level chronic stress and launch an inappropriate immune response.

When the body believes it is in danger (regardless of whether it is an objectively real one like a toxin or an imagined one like an annoying sound), it launches a cascade of physiological responses that include a myriad of hormones, neurotransmitters and signaling molecules. When these processes are chronically activated, they can alter the body and the brain, dysregulate immune function and lead to conditions like asthma, allergies and autoimmune diseases.

The scientific literature has confirmed the association between gifted children and an increased rate of allergies and asthma. One study shows that 44% of those with an IQ over 160 suffered from allergies compared to 20% of age-matched peers. Тhe exploratory study done by the authors of this latest paper further supports that connection.

Based on their findings and previous studies the researchers have termed this phenomenon the hyper brain / hyper body theory of integration, explaining that:

The overexcitabilities specific to those with high intelligence may put these individuals at risk for hypersensitivity to internal and/or external environmental events. The rumination and worry that accompanies this heightened awareness may contribute to a chronic pattern of fight, flight, or freeze responses which then launch a cascade of immunological events. […] Ideally, immune regulation is an optimal balance of pro- and anti-inflammatory response. It should zero in on inflammation with force and then immediately return to a calm state. In those with the overexcitabilities previously discussed, including in those with ASD, this system appears to fail to achieve a balance and thus inflammatory signals create a state of chronic activation.

The authors conclude that it is important to further study the relationship between high intelligence (particularly the top 2%) and illness, especially in order to demonstrate causation and further bring to light the negative aspects of having a high IQ. As they say, “this gift can either be a catalyst for empowerment and self-actualization or it can be a predictor of dysregulation and debilitation” and in order to serve this group, it is important “to acknowledge the rumbles of thunder that follow in the wake of their brilliance.”

Research shows that those who spend more time speaking tend to emerge as the leaders of groups, regardless of their intelligence.
Up Next
Strange Maps

A Crowd-sourced Translation for a Mysterious Map Rug

A Middle-Eastern copy of the famous ‘serio-comic’ map of Europe, with the female figures more modestly dressed