Much like a virus, this study concluded that over time, being exposed to multiple strains of fake news can wear down a person’s resistance and make them increasingly susceptible to believing it. The more times a person is exposed to the same fake news, especially if it is coming from an influential source, the more likely they are to become persuaded, no matter the likelihood of such news being true.

“The so-called ‘power-law’ of social media, a well-documented pattern in social networks, hold that messages replicate most rapidly if they are targeted at relatively small numbers of influential people with large followings,” the researchers explained in the Stanford study. 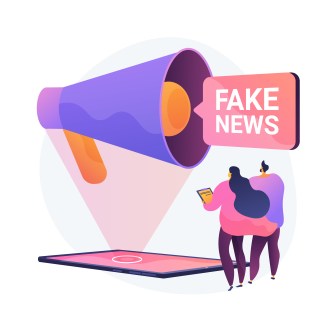 How does misinformation spread?Credit: Visual Generation on Shutterstock

What is the “continued-influence” effect?

A challenge in using corrections effectively is that repeating the misinformation can have negative consequences. Research on this effect (referred to as “continued-influence”) has shown that information presented as factual that is later deemed false can still contaminate memory and reasoning. The persistence of the continued-influence effect has led researchers to generally recommend avoiding repeating misinformation.

“Repetition increases familiarity and believability of misinformation,” the study explains.

What is the “familiarity-backfire” effect?

Studies of this effect have shown that increasing misinformation familiarity through extra exposure to it leads to misattributions of fluency when the context of said information cannot be recalled. A 2017 study examined this effect in myth correction. Subjects rated beliefs in facts and myths of unclear veracity. Then, the facts were affirmed and myths corrected and subjects again made belief ratings. The results suggested a role for familiarity but the myth beliefs remained below pre-manipulation levels.

Where the evidence of fake news is really hiding | Eli Pariser | Big Thinkwww.youtube.com

Fake news exposure can cause misinformation to be mistakenly remembered and believed. In two experiments, the team (led by Christopher N. Wahlheim) examined whether reminders of misinformation could do the opposite: improve memory for and beliefs in corrections to that fake news.

The results of the study showed that reminders increased recall and belief accuracy. These benefits were greater both when misinformation was recalled and when the subjects remembered that corrections had occurred.

Researchers on the project explained: “These findings demonstrate one situation in which misinformation reminders can diminish the negative effects of fake-news exposure in the short term.”

The conclusion: fake-news misinformation that was corrected by fact-checked information can improve both memory and belief accuracy in real information.

“We examined the effects of providing misinformation reminders before fake-news corrections on memory and belief accuracy. Our study included everyday fake-news misinformation that was corrected by fact-check-verified statements. Building on research using fictional, yet naturalistic, event narratives to show that reminders can counteract misinformation reliance in memory reports,” the researchers explained.

“It suggests that there may be benefits to learning how someone was being misleading. This knowledge may inform strategies that people use to counteract high exposure to misinformation spread for political gain,” Wahlheim said.

Tags
curiositydebatedecision makinglearningmemorymindfulnesspsychologySocial mediastorytelling
In this article
curiositydebatedecision makinglearningmemorymindfulnesspsychologySocial mediastorytelling
Related
Neuropsych
How you breathe affects your brain
Your breathing rhythm influences a wide range of behaviors, cognition, and emotion.
Health
What happens when regular porn watchers abstain for a week?
Researchers watched for signs of withdrawal — but didn’t find any.
Thinking
Why you should laugh at yourself, according to Seneca and Nietzsche
“It is more human to laugh at life than to lament it.”
Sponsored
4 misleading personal finance tips
Personal finance advice is often over-simplified and fails to consider economic research or people’s unique circumstances.
Thinking
Bonhoeffer’s “theory of stupidity”: We have more to fear from stupid people than evil ones
Evil is easy to identify and fight against; not so with stupidity.
Up Next
Neuropsych
Can you solve what an MIT professor once called ‘the hardest logic puzzle ever’?
Logic puzzles can teach reasoning in a fun way that doesn’t feel like work.