What exactly does it mean to be nice? Is it about being fair and respectful, or is it more about helping people in need? Both?

In personality psychology, the quality of being nice falls under a broad category called agreeableness. This trait – one of five dimensions in the Big 5 model of personality – refers to how well an individual gets along with others. For example, people who are high in agreeableness might also be described as kind, forgiving, trusting, friendly, warm, modest and patient. The broadness of this category raises some questions, though. Kun Zhao, a personality psychologist at the University of Melbourne, asks in an article she wrote for The Conversation:

“Are there exceptions to this cluster of ‘nice’ personality traits? What about your big-hearted but foul-mouthed friend, or a well-mannered but distant acquaintance?”

The answer is that agreeableness can divided into two related but distinct components: compassion and politeness.

Compassion refers to our tendency to be emotionally concerned about others. Politeness is defined as our tendency to demonstrate good manners, adhere to social norms and avoid aggression.

“Another way to think about it is politeness is more about not doing harm, and compassion is more about helping others,” Zhao said, noting that the way psychologists conceptualize the terms is slightly different than how they’re commonly defined.

(Interestingly, research has shown that compassion tends to be positively associated with liberal political ideology, while politeness is linked to conservative ideology.)

Zhao, along with researchers Eamonn Ferguson and Luke Smillie, conducted two studies to examine the ways in which compassionate people and polite people make social decisions. The first study measured altruism with the dictator game, a task in which an individual is asked to divide a sum of money with a stranger.

“Our results showed that traditional economic predictions were wrong on two counts,” Zhao wrote. “Not only did people not behave selfishly, they behaved in different ways depending on their personality.”

“Notably, polite people were more likely to split the money fairly than their rude counterparts. Surprisingly, we did not see this for compassion, which may indicate that sharing money with a stranger doesn’t necessarily arouse emotional concern.”

The second study measured social decision-making with a third-party recompensation game, in which a bystander witnesses an unfair division of money between two people and is given the opportunity to give their own money to the victim.

“Here, compassionate people gave away more money than their cold-hearted counterparts,” Zhao wrote. “Polite bystanders were not selfish per se — we know this because they were willing to part with their money in the dictator game just moments earlier. But they were no more likely than anyone else to intervene when bearing witness to the mistreatment of others.” 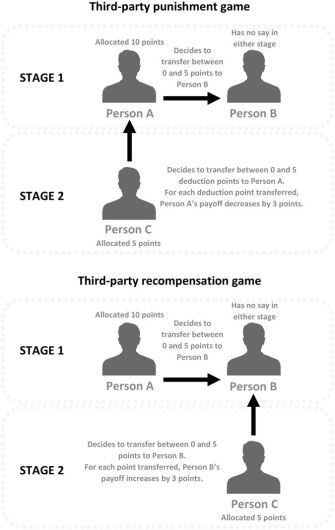 A growing body of research shows that personality traits can, at least in part, be changed through intervention. Zhao referenced a 2011 study that measured the effectiveness of short-term “compassion training.”

“The interesting finding is that compassion training increased prosocial behaviour in a compassion-relevant economic game (the Zurich Prosocial Game), but not the dictator game – which was the first economic game we used (and where we did not see a unique relationship with compassion.)”

“This is consistent with our second study where we find it was related uniquely to compassion too,” Zhao said.

Zhao noted that politeness and compassion aren’t mutually exclusive, and that both have utility.

“You can be high in one and high in another, or low in one and low in another,” Zhao said. “And they’re correlated, that’s why they’re classified under the category of agreeableness.”

“I think all of these traits serve some sort of purpose depending on the scenario. You don’t really want to go into the extreme on any of them.”

Looking deeper into the Big 5 model

Agreeableness isn’t the only dimension of personality that’s been shown to have related yet distinct components. Psychologists have spent years looking beyond the surface of each of the Big 5 dimensions, searching for clearer definitions.

“What they find is that, for each of these five broad summary traits, we can further separate them into two narrower personality traits,” Zhao said, referencing a 2007 study.

As far future research into agreeableness, Zhao’s curious as to what the biological sciences might tell us about personality.

A psychiatrist studied 1,000 near-death experiences. Here’s what he discovered.
▸
7 min
—
with
Dr. Bruce Greyson
Up Next
Politics & Current Affairs

Did ExxonMobil Engage in a Climate Change Cover Up? Harvard Researchers Uncover A Shocking Discovery

The world’s largest oil and gas company may be its own worst enemy.