In 2008, American adults used their mobile phones for about a half hour a day. Nearly a decade later, that number jumped up to 3.3 hours per day. To be fair, a 2008 mobile phone wouldn’t hold a candle to the miniature computers we keep in our pockets, but still, the amount of time we devote to our smartphones begs the question: What is our obsession with smartphones doing to us?

Researchers have been hard at work trying to answer this question. There has been a considerable amount of prior research that’s shown that frequent Facebook and Instagram users self-report higher symptoms of depression, lower self-esteem, and greater body image issues. The trouble with these studies is that they are correlational—they don’t actually say whether social media and smartphone usage cause these undesirable feelings, just that the two are related. 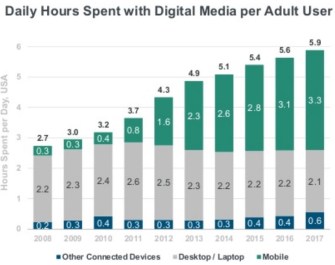 That’s where Melissa G. Hunt’s study comes in. Published in the Journal of Social and Clinical Psychology, Hunt’s study examined the impact of intentionally reducing social media usage in one of the first experimental studies of its kind.

In an interview with the University of Pennsylvania’s Penn Today, Hunt explained that they had “set out to do a much more comprehensive, rigorous study that was also more ecologically valid.” Their study would examine actual usage based on the iPhone’s built-in app monitoring and examine what happens to smartphone users when they reduce their social media intake, enabling them to make claims about what effect social media causes in its users

With just 30 minutes of Instagram, Facebook, and Snapchat a day, this is a significant reduction in the amount of time many people use social media. Some studies have proposed cutting social media out entirely, but considering how much our social and professional lives require these platforms, complete abstinence doesn’t seem feasible. After analyzing the data, Hunt concluded that “experimentally limiting social media usage on a mobile phone to 10 minutes per platform per day for a full three weeks had a significant impact on well-being.” However, social media use doesn’t affect all of the aspects of well-being that Hunt had looked at. Interpersonal support remained unchanged, as well as anxiety, self-esteem, and other measures.

But, said Hunt, “both loneliness and depressive symptoms declined in the experimental group,” which was especially true for those students who reported feeling more depressed. The researchers measured depression using the Beck Depression Inventory (BDI), and scoring above a 14 on the BDI marks the cut-off for clinical depression. Students who reduced their social media usage dropped from a mean of 23 to 14.5—meaning they still experienced a clinical level of depression but to a much less pronounced degree.

What’s more, the students themselves also noticed how their mood had improved over the course of the experiment. One student said, “Not comparing my life to the lives of others had a much stronger impact than I expected, and I felt a lot more positive about myself during those weeks.”

“I was in the control group,” said one student, “and I was definitely more conscious that someone was monitoring my usage. I ended up using less and felt happier and like I could focus on school and not [be as] interested in what everyone is up to.”

There was also an interesting correlation between students’ well-being and their estimated usage. When taking baseline measurements prior to starting the experiment, Hunt had also asked students to guess at how much time they spent on social media.

So, what can smartphone addicts do with these findings? Limiting social media use to just 10 minutes per day per platform can have drastic effects on our perceived well-being. For some, 10 minutes of Facebook a day might sound like a death sentence, but it’s a small price to pay to feel happier and less lonely.

Back with another one of those block(chain)-rockin’ reads.