Sexuality can be a big part of your identity. It can encompass nearly every aspect of your being, including your actions, your attitude, your behaviors, and your feelings. It can impact the way you experience sexual attraction (if you do) and it can alter your preferences around sexual and romantic relationships.

Why is sexuality thought of as a spectrum?

A spectrum, in this context, is a tool that can help us better understand the fluidity of sexuality, among other things. The Kinsey Scale, perhaps one of the most well-known spectrum scales, was created in 1948 by Alfred Kinsey, founder of the Kinsey Institute.

This scale was the first of it’s kind and it challenged the perceptions of sexuality and really, was a starting point for where we are today.

Over time, we have learned more and more about the sexuality spectrum and it’s become more and more normalized to place yourself really anywhere along the spectrum. It’s safe to say we have come a very long way since the 1940s when the Kinsey Scale was first created.

Sexuality is fluid, it is ever-changing and extremely personal – defining your own sexuality is what’s important, not placing these labels on others for them. It’s also extremely normal to be overwhelmed by all the different words we now have to describe various sexual and romantic orientations, attractions, and behaviors.

Along with the ever-growing spectrum, it’s our responsibility as human beings to adapt and expand the language we use to describe our own (and other people’s) sexual preferences. While these “labels” can help us better understand ourselves, they are by no means set in stone. 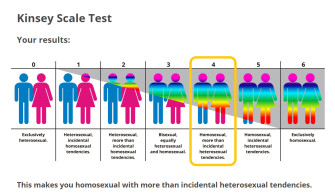 Unofficial Kinsey Scale test (an official test does not exist, according to the Kinsey Institute)IDRLabs

“Many persons do not want to believe that there are gradations in these matters from one to the other extreme.” – Sexual Behavior of the Human Female, 1953.

It’s safe (and wonderful) to say that we have come a long way since the 1950’s. Sexuality and sexual orientation have become more widely talked about, accepted, and even respected. There are still many areas of the world where people are punished for simply existing as who they are and loving who they love, but the best thing we can do as a society is to adapt and evolve with the spectrum.

In the spirit of adapting and growing, here is a breakdown of some lesser-known orientations along the sexuality spectrum.

Autosexuality is the idea of being sexually attracted to yourself. Autoromantic describes the notion of being in a romantic relationship with yourself.

Dr. Jess O’Reilly, a sex and relationship expert, suggests that we may all be “a shade of autosexual,” with some people using it to define themselves and others shying away from it due to body shaming.

Dr. O’Reilly goes on to question: “Can’t we give ourselves permission to feel arousal in response to our own body?”

Demisexual (compared to Graysexual and Asexual)

To be demisexual is to experience sexual attraction in very specific situations, most often with people you have an emotional connection with.

Someone who identifies as demisexual can typically only experience and thrive in sexual attraction once an emotional bond has been formed. That bond doesn’t necessarily have to be explained as love or romance, but it can be friendship (even a platonic friendship) that allows them to feel a sexual or romantic attraction.

While many people choose to only have sexual relations with people we feel connected to, demisexual people aren’t making that choice, but rather, they need that bond to even begin to feel sexually attracted to someone.

And yet, having an emotional bond with someone doesn’t mean people who identify as demisexual will develop a sexual attraction to that person—just as heterosexual men are attracted to women but may not find every single woman they meet to be attractive.

Graysexual, on the other hand, is often considered as the “gray area” between asexual (a term used to describe not having any sexual attraction to others) and allosexual (the opposite of asexual; also called sexual).

People who identify as graysexual don’t explicitly or exclusively identify with being asexual or allosexual. They do experience sexual attraction or desire on some level but perhaps not the same intensity as people on either end of the asexual-allosexual line.

Pansexual is a term that describes individuals who experience sexual, romantic, and/or emotional attraction to any person regardless of that person’s gender, sex, or sexual orientation.

Pomosexual is more of a term than an identity. It’s used to describe individuals who reject sexuality labels or who simply don’t identify with any one of them.

Spectrasexuality is a term used to describe people who are able to feel romantic or physical attraction/emotional connections with people of multiple or various sexual orientations and genders, but not necessarily all of them (or any of them).

These terms are often used interchangeably, but it’s important to point out the differences. Pansexual is by far the most commonly used word of the bunch and is more geared towards not seeing the label and seeing the person instead, thus being able to build romantic and sexual relationships with anyone, regardless of their orientation.

People who identify as spectrasexual, on the other hand, are able to be attracted to multiple or various genders or sexual orientations, but still may have certain preferences.

Tags
gaygenderidentitylgbtlovepersonal growthpersonalityrelationshipsselfSexTransgender
In this article
gaygenderidentitylgbtlovepersonal growthpersonalityrelationshipsselfSexTransgender
Related
Neuropsych
How do lie detectors work?
Experts explain how lie detectors work, what happens in the brain when we tell lies and how accurate polygraph tests are.
Neuropsych
The hypersane are among us, if only we are prepared to look
Carl Jung was one such person.
Health
Stockdale Paradox: Why confronting reality is vital to success
Balancing realism and optimism in a dire situation is a key to success.
Personal Growth
Why divergent thinkers beat geniuses in the real world
Don’t take the prodigy pathway. Become a broad thinker instead.
▸
6 min
—
with
David Epstein
Thinking
5 philosophy jokes that will actually teach you something
Jokes so cheesy even French philosophers will love them.
Up Next
Health
Study spots an autoimmune protein that may cause OCD
An overabundance of this particular protein make mice anxious and is found in human OCD patients.