You get home a few hours before your partner. You’ve had a good day, and you’re feeling in the mood. You cook a fabulous dinner, uncork a bottle of wine, and even do dishes while your partner unwinds in the bath. Afterward, you begin massaging his or her shoulders delicately, lean in, and whisper about moving things into the bedroom.

Without hesitation, your partner shoots you down; he or she is far too tired to even think about sex tonight. But while you’re back there, would you mind getting the lower back, too?

If you’ve been in a committed, long-term relationship, you’ve lived some rendition of this story before. While couples joke about it with friends, truth is, sexual rejection is a difficult, natural, and potentially astringent part of our relationships.

Because of this, men and women will at some point sexually reject their partner and be sexually rejected in turn. With luck, it will be only momentary, though it may grow to be habitual. But it will happen, and the results can be painful either way.

The ups and downs of sexual rejection

A recent study—in preprint as of this writing—looked at the emotional effects sexual rejection has on people in committed relationships. The researchers asked 115 couples to keep sex diaries. Every day for three weeks, the participants logged whether they initiated sex or if their partners made a sexual advance. They also wrote whether it led to sex and recorded daily levels of sexual and relationship satisfaction.

Most of the results aren’t too surprising. Couples that had sex reported higher levels of sexual and relationship satisfaction. This was true for the participants who initiated sex and those who accepted the advancement. Who knew?

Also unsurprising: Rejected partners felt a stifled sexual satisfaction, a sting that could last for up to 48 hours.

Interestingly, participants who were sexually propositioned enjoyed an uptick in sexual satisfaction, whether they accepted the offer or not. A buzz that lasted for up to 72 hours. The reason is likely that the being propositioned signaled that they were desirable in their partner’s eye—a lovely gift to anyone’s self-esteem.

This means, the authors note, that being asked for sex is emotionally low risk. Conversely, being the partner who initiates sex comes with emotional risks. As the authors wrote, “These results indicate that making a sexual advance may be risky for romantic partners, which may lead those who feel less sure of their partner’s response to an advance to do so less often, therefore missing opportunities to bolster intimacy, closeness, and satisfaction.” 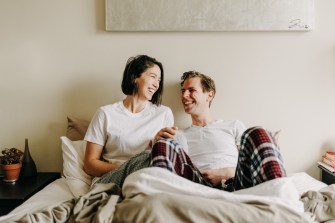 A reassuring rejection mixed with other form of intimate contact can strengthen relationship satisfaction.

Let me down reassuringly

Of course, anyone has the right to reject an offer of sex. We’re autonomous beings and even the most loving and intimate of couples won’t maintain perfectly synchronicity. Sometimes work, children, and all that life clamps down on our sex drives. Sometimes we don’t feel sexy or well. And one partner’s libidinous appetite may simply outpace the other’s.

How can we navigate sexual rejection while limiting the emotional risk to our partners? One study’s suggested answer is “reassuring rejection.”

Like the previous study, the researchers had couples fill out a surveys for 28 days. The participants reported whether their partner rejected a sexual advance within 24 hours and the degree it met one of the four patterns. They also filled out a survey that measured the sexual desire discrepancy between them and their partner, as well as sexual and relationship satisfaction.

“Romantic partners sometimes (or often) engage in sex with their partner for avoidance goals (like to avoid upsetting their partner or avoid conflict),” study author James Kim told PsyPost. “They may do this because they think it would be worse to reject their partner for sex.

“However, our findings suggest that rejecting a partner for sex in positive ways (e.g. reassuring a partner that you still love and are attracted to them) actually represents a viable alternative behavior to having sex for avoidance goals in sustaining both partners’ relationship and sexual satisfaction.”

These studies looked at sexual rejection in the short term, but maintained rejection is bound to wear on a relationship, whether reassuring or not. It is difficult to admit, especially about the ones we love, but seductive appeal can lessen throughout the years, and this can led to patterns of sexual rejection.

According to relationship therapist Esther Perel points out in her TED Talk, dulled desires result from our requiring partners to reconcile two fundamental, yet incompatible, human needs: our need for security and the unexpected.

We put our partners in the unmanageable position of being our source of dependability and insatiable passion. They must be our best friends and intimate confidants yet remain mysterious and novel. They must remain desirable to us while keeping their own desires for the unexpected in check. And they must continue this balancing act while living longer lives than any other previous generation of humans.

Couples try to reconcile this inconsistency by keeping things fresh—a phrase that typically translates as, “Let’s introduce a new toy or lingerie into the mix.” But that’s a heavy ask of some silicone and gossamer fabric.

Instead, novelty comes from seeing our partners and ourselves in a new light. As Perel notes:

But novelty isn’t about new positions. It isn’t a repertoire of techniques. Novelty is, what parts of you do you bring out? What parts of you are just being seen? Because in some way one could say sex isn’t something you do. Sex is a place you go. It’s a space you enter inside yourself and with another, or others.

According to Perel, couples that do manage to reconcile dependency and seduction have a few things in common. These couples:

But what about the persistently rejected? Those who find themselves in relationships where their partner rarely wants to have sex and rejects their advances in assertive or hostile ways? Unfortunately, caring intimacy doesn’t automatically equate to good or alluring sex.

Relationship columnist Dan Savage claims the vast majority of the mail he receives comes from people in sexless marriages who either don’t want to end it or can’t afford to. His standard advice—barring circumstances like children—is to end such relationships as they are not healthy for either partner. He writes:

[O]dds are good that rejection and resentment will have curdled the frustrated half of the couple’s affections so thoroughly that the relationship simply can’t survive. And there’s a better than 50/50 chance that the problem isn’t stress or work-related, but not-attracted-to-you-related, and how long do you want to hang in there before you find that out?

Tags
communicationhappinesshealthlovemarriagerelationshipsSex
In this article
communicationhappinesshealthlovemarriagerelationshipsSex
Related
The Well
How to articulate your thoughts effectively
Make it simple. Make it clear. Make it stick. Alan Alda on how to get everyone to understand your thoughts.
▸
5 min
—
with
Alan Alda
Life
How artificial intelligence is helping us decode animal languages
Communication among cetaceans, like whales and dolphins, looks especially promising.
Neuropsych
About 1 in 100 people stutter. What causes it?
The majority of children who stutter will spontaneously recover from it without intervention, but some 20% of people do not.
Neuropsych
How do lie detectors work?
Experts explain how lie detectors work, what happens in the brain when we tell lies and how accurate polygraph tests are.
The Present
The real reasons we turn on “airplane mode” when we fly
Shouldn’t “flight mode” be obsolete?
Up Next
Health
Not much is happening in self-isolation. So why are you still so tired?
Thankfully, there are ways to combat mental and physical fatigue, even in isolation.