The following is an excerpt from Dr. Stephen Fleming’s forthcoming book Know Thyself. It is reprinted with permission from the author.

I now run a neuroscience lab dedicated to the study of self-awareness at University College London. My team is one of several working within the Wellcome Centre for Human Neuroimaging, located in an elegant town house in Queen Square in London. The basement of our building houses large machines for brain imaging, and each group in the Centre uses this technology to study how different aspects of the mind and brain work: how we see, hear, remember, speak, make decisions, and so on. The students and postdocs in my lab focus on the brain’s capacity for self-awareness. I find it a remarkable fact that something unique about our biology has allowed the human brain to turn its thoughts on itself.

Until quite recently, however, this all seemed like nonsense. As the nineteenth-century French philosopher Auguste Comte put it: “The thinking individual cannot cut himself in two — one of the parts reasoning, while the other is looking on. Since in this case the organ observed and the observing organ are identical, how could any observation be made?” In other words, how can the same brain turn its thoughts upon itself?

Comte’s argument chimed with scientific thinking at the time. After the Enlightenment dawned on Europe, an increasingly popular view was that self-awareness was special and not something that could be studied using the tools of science. Western philosophers were instead using self-reflection as a philosophical tool, much as mathematicians use algebra in the pursuit of new mathematical truths. René Descartes relied on self-reflection in this way to reach his famous conclusion, “I think, therefore I am,” noting along the way that “I know clearly that there is nothing that can be perceived by me more easily or more clearly than my own mind.” Descartes proposed that a central soul was the seat of thought and reason, commanding our bodies to act on our behalf. The soul could not be split in two — it just was. Self-awareness was therefore mysterious and indefinable, and off-limits to science. 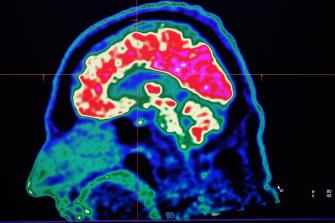 We now know that the premise of Comte’s worry is false. The human brain is not a single, indivisible organ. Instead, the brain is made up of billions of small components — neurons — that each crackle with electrical activity and participate in a wiring diagram of mind-boggling complexity. Out of the interactions among these cells, our entire mental life — our thoughts and feelings, hopes and dreams — flickers in and out of existence. But rather than being a meaningless tangle of connections with no discernible structure, this wiring diagram also has a broader architecture that divides the brain into distinct regions, each engaged in specialized computations. Just as a map of a city need not include individual houses to be useful, we can obtain a rough overview of how different areas of the human brain are working together at the scale of regions rather than individual brain cells. Some areas of the cortex are closer to the inputs (such as the eyes) and others are further up the processing chain. For instance, some regions are primarily involved in seeing (the visual cortex, at the back of the brain), others in processing sounds (the auditory cortex), while others are involved in storing and retrieving memories (such as the hippocampus).

In a reply to Comte in 1865, the British philosopher John Stuart Mill anticipated the idea that self-awareness might also depend on the interaction of processes operating within a single brain and was thus a legitimate target of scientific study. Now, thanks to the advent of powerful brain imaging technologies such as functional magnetic resonance imaging (fMRI), we know that when we self-reflect, particular brain networks indeed crackle into life and that damage or disease to these same networks can lead to devastating impairments of self-awareness.

I often think that if we were not so thoroughly familiar with our own capacity for self-awareness, we would be gobsmacked that the brain is able to pull off this marvelous conjuring trick. Imagine for a moment that you are a scientist on a mission to study new life-forms found on a distant planet. Biologists back on Earth are clamoring to know what they’re made of and what makes them tick. But no one suggests just asking them! And yet a Martian landing on Earth, after learning a bit of English or Spanish or French, could do just that. The Martians might be stunned to find that we can already tell them something about what it is like to remember, dream, laugh, cry, or feel elated or regretful — all by virtue of being self-aware.

I find it a remarkable fact that something unique about our biology has allowed the human brain to turn its thoughts on itself.

But self-awareness did not just evolve to allow us to tell each other (and potential Martian visitors) about our thoughts and feelings. Instead, being self-aware is central to how we experience the world. We not only perceive our surroundings; we can also reflect on the beauty of a sunset, wonder whether our vision is blurred, and ask whether our senses are being fooled by illusions or magic tricks. We not only make decisions about whether to take a new job or whom to marry; we can also reflect on whether we made a good or bad choice. We not only recall childhood memories; we can also question whether these memories might be mistaken.

Self-awareness also enables us to understand that other people have minds like ours. Being self-aware allows me to ask, “How does this seem to me?” and, equally importantly, “How will this seem to someone else?” Literary novels would become meaningless if we lost the ability to think about the minds of others and compare their experiences to our own. Without self-awareness, there would be no organized education. We would not know who needs to learn or whether we have the capacity to teach them. The writer Vladimir Nabokov elegantly captured this idea that self-awareness is a catalyst for human flourishing:

“Being aware of being aware of being. In other words, if I not only know that I am but also know that I know it, then I belong to the human species. All the rest follow s— the glory of thought, poetry, a vision of the universe. In that respect, the gap between ape and man is immeasurably greater than the one between amoeba and ape.”

In light of these myriad benefits, it’s not surprising that cultivating accurate self-awareness has long been considered a wise and noble goal. In Plato’s dialogue Charmides, Socrates has just returned from fighting in the Peloponnesian War. On his way home, he asks a local boy, Charmides, if he has worked out the meaning of sophrosyne — the Greek word for temperance or moderation, and the essence of a life well lived. After a long debate, the boy’s cousin Critias suggests that the key to sophrosyne is simple: self-awareness. Socrates sums up his argument: “Then the wise or temperate man, and he only, will know himself, and be able to examine what he knows or does not know…No other person will be able to do this.”

Likewise, the ancient Greeks were urged to “know thyself” by a prominent inscription carved into the stone of the Temple of Delphi. For them, self-awareness was a work in progress and something to be striven toward. This view persisted into medieval religious traditions: for instance, the Italian priest and philosopher Saint Thomas Aquinas suggested that while God knows Himself by default, we need to put in time and effort to know our own minds. Aquinas and his monks spent long hours engaged in silent contemplation. They believed that only by participating in concerted self-reflection could they ascend toward the image of God. 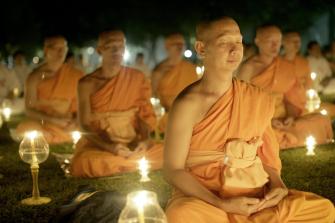 A similar notion of striving toward self-awareness is seen in Eastern traditions such as Buddhism. The spiritual goal of enlightenment is to dissolve the ego, allowing more transparent and direct knowledge of our minds acting in the here and now. The founder of Chinese Taoism, Lao Tzu, captured this idea that gaining self-awareness is one of the highest pursuits when he wrote, “To know that one does not know is best; Not to know but to believe that one knows is a disease.”

Today, there is a plethora of websites, blogs, and self-help books that encourage us to “find ourselves” and become more self-aware. The sentiment is well meant. But while we are often urged to have better self-awareness, little attention is paid to how self-awareness actually works. I find this odd. It would be strange to encourage people to fix their cars without knowing how the engine worked, or to go to the gym without knowing which muscles to exercise. This book aims to fill this gap. I don’t pretend to give pithy advice or quotes to put on a poster. Instead, I aim to provide a guide to the building blocks of self-awareness, drawing on the latest research from psychology, computer science, and neuroscience. By understanding how self-awareness works, I aim to put us in a position to answer the Athenian call to use it better.

Being mortal makes life so much sweeter.
Up Next
Starts With A Bang

Where Do Galaxies Come From?

We’ve almost got the entire story. James Webb will put the last piece into place.In all of science, there are really only two ways that something can be “known” to humanity. […]