There’s been a fair amount of research into why people enjoy being scared by movies, haunted houses, and so on. A recent study looked at a good fright’s capacity for creating a sort of arousal, a euphoria that lowers our brain’s stress levels. Of course, being genuinely frightened by actual danger isn’t so much of a rush.

So, what’s too frightening and what’s just frightening enough to be enjoyable? A new study accepted for publication though not yet published in the journal Psychological Science from researchers at Aarhus University in Denmark attempts to scare up an answer. It comes from the school’s Recreational Fear Lab.

“By investigating how humans derive pleasure from fear,” lead author Marc Malmdorf Andersen of the school’s Interacting Minds Center tells Newswise, “we find that there seems to be a ‘sweet spot’ where enjoyment is maximized.” 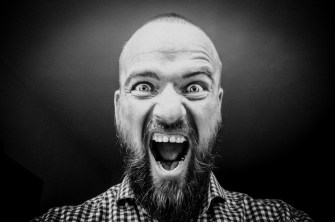 Previous studies have tracked physiological signs of fear arousal, but none have established a one-to-one correlation between that arousal and specific, actual fear events.

Andersen says that much of the research has been conducted in lab settings with weak fear stimuli, observing subjects as they experience things like scary videos. Scares in these situations tend to be weak and difficult to measure. Even harder to track in these situations is the link between enjoyment and fear.

Andersen and his colleagues conducted their experiments at Dystopia Haunted House, a commercial attraction in Vejle, Denmark constructed in an old, run-down factory. The Recreational Fear Lab has a long-standing partnership with the spook shack.

They outfitted 100 volunteers with heart monitors and sent them on their terrifying way through the 50-room horror mansion. The facility incorporates a number of fright mechanisms including frequent jump scares in which a sudden threat takes a visitor by surprise.

Researchers surreptitiously observed their participants on closed-circuit video as they made their way through the attraction. They tracked each individual’s scares, scoring them for intensity according to their visible reactions. After exiting the attraction, individuals self-reported their experiences in the haunted house.

Combining these self-reports with observer notes and each participant’s heart-rate data gave the researchers subjective, behavioral, and physiological insights into the ways in which fear is experienced, and when it’s a good thing or not.

In analyzing their data, the researchers saw two separate inverted u-shape curves. One depicted participants’ enjoyment based on their self-reports and observed behavior. A similar u-curve was detected in their heart rates showing that just the right amount of heartbeat acceleration is associated with fun, but too much is too much. It’s the terror Goldilocks zone.

Says Andersen, “If people are not very scared, they do not enjoy the attraction as much, and the same happens if they are too scared. Instead, it seems to be the case that a ‘just-right’ amount of fear is central for maximizing enjoyment.”

The research suggests that being scared is enjoyable when it represents just a quick minor physiological deviation from one’s normal state. When it goes on too long, however, or triggers too severe a physiological change, it becomes disturbing. Game over.

Andersen notes that this is not dissimilar to the factors known to make interpersonal play enjoyable: just the right amount of uncertainty and surprise. These are, maybe not coincidentally, also the ingredients of a successful joke.

Tags
fearhalloweenhuman bodyplaypsychologyscare
In this article
fearhalloweenhuman bodyplaypsychologyscare
Related
Health
How saliva changes the flavor of food
“It’s a liquid, but it’s not just a liquid.”
How to live after your soulmate has died
Astronomer Michelle Thaller explains the healing power of physics after losing her husband.
▸
7 min
—
with
Michelle Thaller
The Future
Space travel will radically change human psychology and spirituality
We are traveling in a realm that once exclusively belonged to the gods. Space travel will force humanity to rethink everything.
Neuropsych
Memory and the benefits of forgetting
Forgetfulness isn’t always a “glitch” in our memories; it can be a tool to help us make sense of the present and plan for the future.
The Learning Curve
5 Stoic quotes to help you through difficult times
“We suffer more often in the imagination than in reality.”
Up Next
Hard Science
Fireball meteorite offers clues to origins of life
A meteorite that smashed into a frozen lake in Michigan may explain the origins of life on Earth, finds study.