With Valentine’s Day upon us, are you looking for a way to bring more love into your relationship? Take an art class or pick up a new board game to play together. This advice comes courtesy of a new study from Baylor University, which found that the bodies of couples engaged in such activities released oxytocin — “the hugging hormone.” What’s especially surprising? Men who took up art released twice as much oxytocin as the women or couples who played games.

The study, which was published in the Journal of Marriage and Family on February 12, was the first to look at how different kinds of leisure are related to the release of oxytocin — a hormone linked to social interaction, sexual behavior and family unity.

The study’s author Karen Melton, assistant professor of child and family studies at Baylor University, said the researchers were expecting an opposite result — they thought that couples engaged in board game play would have more interaction and release more oxytocin, because of having to communicate about strategy or due to competition.

The researchers made other interesting findings. It turned out that couples in an art class paid more attention to each other than to the instructor. There was also more touching between partners in an art class than among couples playing board games.

Melton explained that partners “turned the activity into a bonding time by choosing to interact — putting an arm around their partner or simply saying, ‘Good job.”

The “big finding” the study, according to Melton, was that “all couples release oxytocin when playing together — and that’s good news for couples’ relationships.”

In an unexpected discovery, the scientists figured out that men who took the art class released from 2 to 2.5 times more oxytocin if compared to others. What does this suggest? “Some types of activities may be more beneficial to males than females, and vice versa,” shared Melton.

Here’s how the activities ranked for release of oxytocin:

Another valuable insight gleaned from the study? Couples release more oxytocin when they are in a new environment. Novelty is key for keeping relationships stronger. 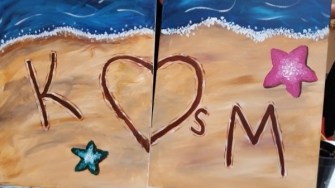 Along with Melton, the study was co-authored with child and family studies professor Maria Boccia. Their research involved 20 couples aged 25–40. The couples had to go on one-hour dates which included game nights and art classes. One group played games in a home-like environment.

Among the games were Monopoly, cards, checkers, chess, puzzles, word games and even dominoes, while the art classes involved painting a beach scene with the couple’s initials in the sand.

How did they measure oxytocin, you ask? Via urine samples, taken before and after the various date nights.

A survey of 6 items measures the communication and contact levels of the couples.

The researchers think what they saw in the study can very much apply to the everyday life of family relationships. Family members need “to find those small, meaningful ways to interact when they’re eating dinner together or going for a walk or doing homework with a child or sitting on their couches with their iPad,” said Melton.

You can read the study — “Examining Couple Recreation and Oxytocin Via the Ecology of Family Experiences Framework” — more in depth here.

The modern antiracist movement is harming the very people it claims to help, according to the linguist John McWhorter.
Up Next
High Culture

Transport yourself to other worlds and states of mind.