If you want to know what someone is thinking, don’t listen to their words. Instead, watch their face. Recognition of emotions in facial expressions (REFE) is one of our animal superpowers. Expressions predate language as a major form of communication and often tell a much more honest story than the string of sounds emerging from mouths.

Learning by watching someone’s facial and bodily pantomimes plays an important role in our social heritage. Context matters as well. Plenty of room for error exists should you misdiagnose. Yet higher-order emotions, such as empathy, rely on understanding the experiences of others. This begins by comprehending facial expressions that you too have lived through.

This human trait is what makes a new systematic review of eight prior studies on psychedelics so interesting. Published in Therapeutic Advances in Psychopharmacology, a team at the University of Sao Paulo discovered that LSD and psilocybin reduce the user’s recognition of negative facial expressions thanks to modulated amygdala activity.

For those that experience trouble reading emotional states, such an intervention could be a boon. Previous research shows that sufferers of anxiety and mood disorders have trouble reading facial expressions.

How LSD and shrooms could help treat anxiety, addiction and depression

How LSD and shrooms could help treat anxiety, addiction and depression

Fortunately, improving REFE has a therapeutic effect. Depression, for example, is alleviated faster through REFE than antidepressants. Since pharmaceuticals often have damaging long-term consequences, using a natural, skillful intervention (such as learning to better read faces) is low-risk, high-reward medicine.

The authors write that while MDMA has been shown to improve REFE, so does a class of serotonergic hallucinogens that act on the brain’s serotonin system: LSD, psilocybin (mushrooms), DMT (in ayahuasca or its more fast-acting isolated form), and mescaline. As tryptamine derivatives, these substances bind to serotonin-1a receptors (resulting in a feeling of contentment) and serotonin-2a receptors (resulting in the “mystical experience”). This potent combination results in both an alleviation from the drudgery of self while also boosting sensations of satisfaction and ease.

The therapy is holistic—it’s no longer only about you. A sense of universality of shared experience emerges. Postdoctoral fellow Rafael Guimarães dos Santos says of the study:

“Altering emotional processing by modifying facial emotion recognition could be one of the mechanisms involved in the therapeutic potentials of ayahuasca and other serotonergic hallucinogens.”

Collecting a total of 62 studies that fit their search criteria, dos Santos and team settled on eight for their review. While the initial data collection included research on a variety of psychedelics, they ended up using only studies that investigated LSD or psilocybin. 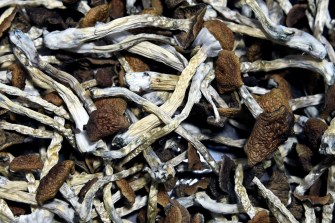 Mazatec psilocybin mushrooms dried and ready for consumption May 14, 2019 in Denver, Colorado.

There were a few issues, causing the team to add the disclaimer that their review might not provide clinical significance. The studies reviewed were small; some did not use placebo (although, to be fair, you know if you receive a placebo during a study on psychedelics). Still, the authors conclude:

“The studies reviewed showed that a single dose or a few doses of LSD or psilocybin was associated with a modified pattern of recognition of negative emotions that could be interpreted as beneficial, since several of these studies showed that these modifications were correlated with increases in positive mood and/or anxiolytic and antidepressant effects.”

Since there is a correlation between depression and increased responses in the amygdala, your brain’s fight-flight-freeze center, that serotonergic hallucinogens tamp down the negative response mechanism is worth noting. Other brain regions are also influenced by psychedelics, but the loosening of depression and anxiety appears to be centered in that almond-shaped set of neurons.

Another explanation might be that psychedelics inspire in us a sense of awe. They can certainly be overwhelming, yet they are also humbling. Instilling humility appears to be a primary therapeutic effect of serotonergic hallucinogens, which is likely why they have shown efficacy in treating addiction.

Feeling part of a larger whole is the opposite of anxiety, which can reach existential heights in severe cases. Psychedelics appear disorienting to the novice, yet with time and guidance they are quite instructive. American society is catching on to their potential, with Denver decriminalizing mushrooms and Oakland doing the same for all “natural psychedelics.”

Quieting the fear response is an important therapeutic agent in many diseases. We know that, for many people, current antidepressant regimens are not working. It’s time for larger-scale studies to give psychedelics the chance they deserve.

You only have 4,000 weeks of life. Use them wisely.
Neuropsych

New memories appear to be stabilized in the brain by a neurotransmitter called gamma-aminobutyric acid (GABA).
Up Next
The Present

The pizza giant Domino’s partners with a Silicon Valley startup to start delivering pizza by robots.