Let’s set aside the Tooth Fairy, Santa Claus, and the Easter Bunny for a few moments. There are countless other — typically well-intentioned — daily lies that a parent may tell a child, including empty threats to get them to behave, over-simplification of tricky questions, and so on. A new psychology study led by Setoh Peipei of Nanyang Technological University (NTU), Singapore, however, finds a correlation between being lied to in childhood and lying more as an adult, something that other research has shown becomes easier and easier over time. It’s also associated with other problematic behaviors such as rule-breaking, aggression, and intrusiveness. 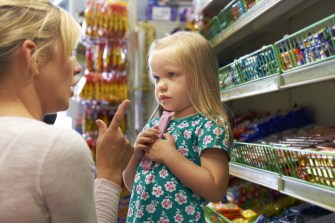 The 24/7 demands of parenting can be relentless, and it’s easy to understand why an exhausted Mom or Dad may be attracted to shortcuts that seem to save time and obviate the need for complicated explanations that would require maturity to grasp. There are lots of these:

Nonetheless, trust shifts once a child sees that actually you’ll wait for them to come and not abandon them in the store, and the implicit message is ultimately, “I tell you never to lie, but I do it to you all the time.”

“Authority assertion over children is a form of psychological intrusiveness,” points out Setoh, “which may undermine children’s sense of autonomy and convey rejection, ultimately undermining children’s emotional well-being. Future research should examine the nature of the lies and goals of the parents so that researchers can suggest what kind of lies to avoid, and what kind of truth-telling parents should engage in.” 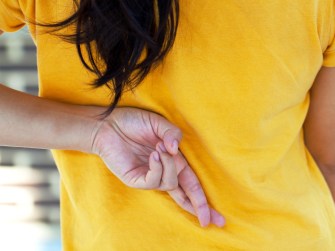 The study published in the September issue of the Journal of Experimental Child Psychology was a collaboration between Setoh and researchers from University of Toronto in Canada, University of California, San Diego in the U.S., and Zhejiang Normal University in China.

The subjects were 379 young adults from Singapore who responded to questions posed in online surveys:

The results may be taken with a few caveats. First, self-reporting can be unreliable. Second, while the subjects’ answers show a correlation between parental lying and individuals’ behaviors, it’s just that, a correlation that may or may not indicate the true cause of their problems. Finally, Setoh suggests a more complete picture of the mechanisms at play could be gained from a study that involves both young adults and their parents. 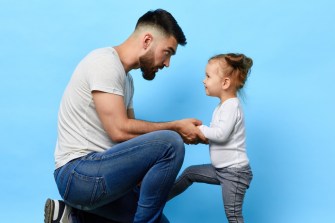 Setoh tells NTU, “Parents should be aware of these potential downstream implications and consider alternatives to lying, such as acknowledging children’s feelings, giving information so children know what to expect, offering choices and problem-solving together to elicit good behavior from children.”

To respond effectively, honestly, and relatively easily to difficult inquiries, answer the question being asked and stop. A child questioning you about such topics will never ask, “Tell me all about sex,” for example, but more likely, “Did I live in your tummy?” or “How did I get in there?” By honestly answering the question being asked, you don’t have to lie, and you’re unlikely to be met with any difficult follow-up questions since the child needs time to absorb and process the new information. They may get back to you later with a follow-up, of course, at which point you do the same thing. Few people asking what time it is want to know how to build a clock.

Marijuana use among college students in 2020 reached levels not seen since the 1980s.
Thinking

In a world without "bullshit jobs," we would have more hours available to us to learn new skills and to unleash our creative side.
The Future

"Theory of mind" enables all people to naturally infer other people's mental states. Psychopaths don't seem to put much effort into the process.
Up Next
Think Again Podcasts

men, masculinity, and the unfinished conversation, with Liz Plank

Progress for women can only go so far while men still struggle with ideals of masculinity that teach violence and emotional disconnect. Liz Plank is trying to change the conversation.