Insomnia is not fun for anyone, but one particular man suffered from an unimaginable problem. Every night, while lying in bed, he listened for police sirens. His existential distress: dying from battery acid spilled in a car crash. When the sirens rang, he put on a special pair of running shoes, drove to the scene, and waited for the police to leave.

Next, as psychoanalyst Norman Doidge describes, “he would scrub the asphalt with a brush for hours, then skulk home and throw out the shoes he had worn.” The man’s expensive habit was due to obsessive-compulsive disorder (OCD), a disease in which sufferers feel that imminent harm is present to themselves or those they love. OCD grows worse with age, restructuring parts of the brain. The worries, often viewed as bizarre by outsiders, cripple the patient.

The concerns of OCD patients revolve around danger: not shutting off an oven; being dirty, leading to excessive hand washing; living in a germ-filled environment, which can cause compulsive cleaning. We are all built from habits that serve an evolutionary purpose: dependable patterns allow us to apply our cognitive resources elsewhere. Those with OCD become “stuck” in habits that dominate their existence. Thus far, most treatments have proven ineffective.

Pinpointing an exact cause of OCD can be difficult. As Doidge writes, one particularly afflicted college student put a gun in his mouth and pulled the trigger. Miraculously, he survived, giving himself a lobotomy in the process. Upon recovering, his OCD was cured. He soon returned to college. The damage to his frontal lobes fixed his suffering, so it appears such obsessive checking and worrying is a human trait.

Not that we should ever contemplate such an extreme path. A new study, published in PLOS Computational Biology by researchers at The Hebrew University of Jerusalem, adds to the literature by speculating that OCD sufferers place less trust in their past, creating a negative feedback loop as they age.

There’s a parallel with anxiety disorder. When sufferers experience a panic attack in a certain location, they imprint that environment as a place that causes attacks. When they return, the environment—more accurately, their nervous system responding to the environment—triggers a panic response. Likewise, those with OCD create a mental image of distrust from past habits. When triggered, symptoms of their disorder manifest. They leave the house, walk into the hallway or front yard, and are triggered to check that the lights are off—again, and again, and again.

For this study, lead author Isaac Fradkin and his colleagues studied 58 people with varying degrees of obsessive-compulsive symptoms. The subjects were asked to judge past experiences with recent observations. The more symptoms they expressed, the more likely they were to distrust their past. This caused them to believe that new environments are unpredictable, and therefore should be avoided or distrusted. They were actually more surprised by predictable outcomes than unpredictable ones. 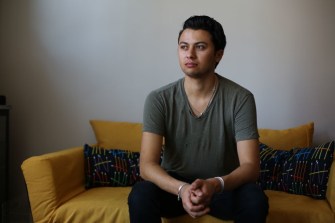 Brandon Petulla sits on the sofa at home in New York on October 28, 2017. Obsessive-compulsive disorder (OCD) turned a young photographers life into a living hell – by convincing him he had sold his soul to the devil.

The researchers used mathematical models to reach their conclusions—the worse the disorder, the more likely subjects were to be shocked by mundane outcomes. They might not thrive in uncertainty, but they appear to expect it. As Fradkin puts it,

“Our findings highlight a novel framework for understanding the cognitive and computational process that gives rise to obsessive compulsive symptoms. The results also stand in stark contrast with the common preconception of OCD as being characterized by inflexible behavior, distinguished by overreliance on past experience.”

This research should also help support the growing literature that shows how important environment is to disease. Environmental triggers bear influence across the spectrum of mental health disorders. Humans are not separate from nature; we are an integral part of it. Modern medicine has a tendency to isolate the neurochemistry of disorders from the environment that it appears in, which only explains the what, not the why. Therapeutic courses needs both.

As the authors conclude, “excessive transition uncertainty,” the inability to predict future outcomes, “is expected to affect not only reliance on the past, but also goal-directed behavior.” We all predict based on past experiences, but when you distrust the past, it becomes impossible to trust the future. This is the feedback loop OCD sufferers live inside of. Finding a way out remains the challenge therapists and patients face.

The “Mind After Midnight” hypothesis aims to explain why night owls tend to suffer more negative health outcomes.
Up Next
Starts With A Bang

Should NASA Send New Horizons To A Nearby Star For Its Final Mission?

New Horizons, which passed close by the Kuiper Belt Object MU69 (now known as Arrokoth), will likely have one more opportunity to fly by a Kuiper Belt member before heading […]