The following is an excerpt from the book Smarter Tomorrow. It is reprinted with permission of the publisher.

To some, the word “hacking” is menacing. Computer hackers breaking through online security systems to steal credit card numbers come to mind. To others it means a prank. When I was a student at MIT, our pranks were famous — like the one where students put a police car on the roof of a building, complete with doughnuts in the front seat. Hacking in that context is a way to poke fun, to imagine things done differently. Neurohacking — hacking brain function — involves finding creative shortcuts, using common materials for uncommon purposes, and challenging convention. It is fueled by curiosity — in this case, curiosity about how the mind works.

Neurohacking involves two activities: exploring your current mental abilities and upgrading them. Let’s look at an example of how one neurohacker upgraded his memory.

On September 14, 2010, a computer scientist named Roger Craig became the highest single-day earner on the quiz show Jeopardy! ($77,000). He held his title for nearly 10 years. In 2011, Craig explained his approach to retaining the information a Jeopardy! champion needs. One of his secrets? A century- old memory technique.

In the 1880s, a German psychologist named Hermann Ebbinghaus shut himself up in a room in Paris to test how memory works. He forced himself to learn, review, and recall nonsense words on a specific, timed schedule. What Ebbinghaus discovered was that the rate of forgetting was predictable. He discovered a pattern of exactly how long it took to forget. If he reminded himself of one of his nonsense words just before he knew he was about to forget it — but no sooner — he could save himself hours of studying but still recall the information correctly. The trick was knowing when he was about to forget it. Ebbinghaus’s memorization technique became known as spaced repetition. Essentially, it was the most highly specific, scientifically based study schedule you could dream of. Over a hundred years later, specially designed computer programs made following a modified version of Ebbinghaus’s schedules feasible.

Our Jeopardy! champion, Roger Craig, used just such a program to spectacular success. He found an archive of past Jeopardy! questions and answers and input them into the free spaced repetition program Anki. Ebbinghaus would have been proud: after his initial learning period, Craig kept his knowledge fresh and learned new material in just 10-30 minutes a day, focusing only on the information he was just about to forget. Using spaced repetition not only saved Craig time, it earned him Jeopardy! fame and fortune.

Whatever goals you have for your brain, neurohacking offers highly personal upgrades to just about anyone. You are about to join the ranks of a bold, inquisitive crew. Prepare to have fun and indulge your inner nerd.

When I started the research for this book over a decade ago, neurohackers were few, and we were sprinkled around the globe. For the most part, we didn’t even know about each other. Over time, I interviewed researchers in their labs and built my own tools from spare parts. It took me years to find like-minded individuals who could make that adventure less lonely, not to mention more efficient. You, however, can skip much of that.

Today you can find lively communities both online and in person devoted to biohacking — hacking one’s biology (which can, of course, include the brain). There are active groups on Reddit, Meetup, Facebook, and other platforms. Fans of author Tim Ferriss’s bestselling book on biohacking, The 4-Hour Body, gather online, too.

For a wonderful group of self-experimenters and self-trackers, check out the Quantified Self community. It was started in California by Wired magazine founding editors Gary Wolf and Kevin Kelly in 2007. Quantified Self’s thousands of members share an interest in “self-knowledge through numbers.” Their personal “show-and-tell” projects range from a man who used journaling and self-tracking to lose 200 pounds after a lifetime of obesity to a woman who struggled with fertility and biohacked her way to a healthy pregnancy.

For a community that is focused specifically on the brain and new technologies relating to it, there is the NeuroTechX community, co-founded by a group of North American university students in 2015. Today it hosts “hack nights” (meetups where enthusiasts work on neurotechnology projects together), networking gatherings, and other events for its thousands of members and hundreds of chapters around the world.

These communities vary in how science-oriented their members are, but the range of personalities and backgrounds is broad enough that you’ll find someone to your liking if you keep looking. While these groups’ membership often reflects the American technology community’s demographics — white, male, trained in engineering, fairly affluent—there is a growing portion of people of all races, genders, and professions. What unites everyone? Curiosity. And a belief that understanding your own data can free you of your pre-conceived notions and biases. 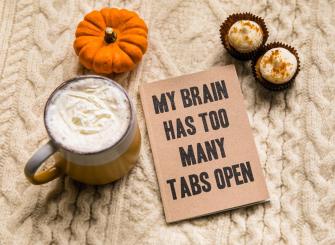 Credit: That’s Her Business via Unsplash

In 2012, Steven Jonas, an analyst at a nonprofit, gave a public talk about his personal project aimed at reducing a stress-related issue with his mental performance. He had noticed that at various points during his workday, his mind froze. Then he would suddenly find himself “fleeing” — skimming news articles and memes, or jumping up for a carb-heavy, pick-me-up snack. Realizing it was a stress response didn’t help. He needed a way to physically measure his stress. If he could measure it, he hoped he could learn to manage it.

Jonas found something called HRV, short for “heart rate variability.” In a healthy, fit person, the interval between heartbeats varies a lot — high HRV — because it is acutely responsive to changing signals from the brain. Decades of research on the connection between the heart and the brain have produced the finding that, when chronically stressed, the heart becomes less responsive to the brain, leading to low HRV. Jonas decided to track his HRV in order to detect his stress, hoping to catch stress before it turned into a “brain freeze.” To measure HRV, you use a chest strap or other sensor worn on the skin. So Jonas modified an old HRV device to beep whenever it detected his HRV decreasing (indicating that stress was increasing).

He began to notice patterns: email set off the beep generally, and emails from certain people really set it off. Soon, he could predict when the beeps would come. This gave him time to try an intervention to reduce the stress: a breathing exercise. With the increased self-awareness that his just-in-time beeps provided, Jonas began to experience fewer brain freezes. As a bonus, his self-tracking revealed that on days when he heeded these just-in-time triggers, he finished his workday with energy left over.

Now’s a great time to get into neurohacking

Self-tracking and self-experimentation — the core of neurohacking — are easier to do now than they have been at any other time in history. We have smartphones with apps that can log your data automatically. We have free spreadsheet tools to document our experiments. You can order many tests and interventions from the comfort of your own home. Even if you prefer pencil and paper for tracking, you can still find online communities in which to get tips and troubleshoot. Doctors are more open to self-tracking than they were a decade ago, when I first began the research for this book. That means that you can (and should!) share your findings with your doctor as you track yourself and run your self-experiments. You can provide data that can help them personalize their care for you.

In the late summer of 2014, Mark Drangsholt, a clinician-scientist and triathlete, gave a talk at a Quantified Self conference. He explained that he had complained to his doctor that he was suffering from brain fog — periods when he couldn’t remember words, forgot key information, and couldn’t concentrate. Because brain fog can have many causes and because Drangsholt seemed generally healthy, the doctor was unsure how to help.

Drangsholt decided to take matters into his own hands; he gathered genetic, blood, and cognitive test data from consumer companies. Armed with this array of data, he returned to his doctor. Together, they were able to pinpoint the likely cause of his bouts of brain fog: narrowing in small blood vessels in a key area of his brain. The doctor prescribed a statin that lowered his cholesterol levels; Drangsholt’s brain fog went away.

Would Drangsholt or his doctor say everyone with brain fog should take a statin? Almost certainly not. Drangsholt’s self-tracking, however, helped support a much more personalized form of medicine. Knowledge through self-experimentation is power; Drangsholt’s self-knowledge gave him the power to finally dispel his brain fog.

In tough competitions, men tend to give up early when they feel a low sense of control. Testosterone eradicates that effect.
Life

When we try to recreate simpler versions of natural ecosystems, we invariably make mistakes, argues author and biologist Rob Dunn.
Up Next
The Future