If there’s one meme that ought to infect the internet hive mind, it’s the “Motte and Bailey” meme.

It shows a 10th-century castle system called a motte-and-bailey, which consists of a courtyard next to a fortified tower on a hill. Above each is text outlining two arguments. 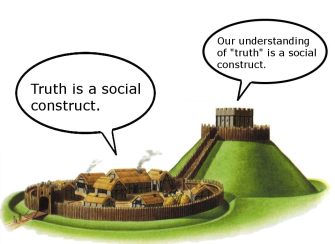 The format is sort of confusing at first glance. But once understood, it offers a solid way to visualize bad arguments because it highlights a shady rhetorical move common in political discourse.

Here’s an example in a hypothetical argument about homeopathic medicine:

A: Homeopathic medicine can cure cancer.
B: There’s no evidence showing homeopathy is effective.
A: Actually there are many ways for people to be healthy besides taking doctor-prescribed drugs.

Spot it? Person A started with a bold and controversial opinion that’s hard to defend (homeopathic medicine cures cancer). But when challenged, they retreated to an uncontroversial argument that’s much easier to defend (prescription drugs aren’t the only route to good health).

Person B would probably agree: Sure, there are many ways to be healthy besides drugs. But then, having deflected the first attack, Person A could go right back to arguing for homeopathic medicine as a cancer treatment.

Motte-and-Bailey blank meme template, plus an explainer of how to use it, and an example. pic.twitter.com/d7yT8HbjAf

In 2005, philosopher Nicholas Shackel coined this move as the “Motte and Bailey Doctrine.” (People often call it a fallacy, but Shackel wrote a blog post in 2014 explaining why he calls it a doctrine, and how “a myriad of persuasive fallacies” can be snuck into a motte-and-bailey.)

The name comes from a castle-defense system developed in the 10th century in northern Europe. One part was a courtyard area, called a bailey, where people would trade, eat, and work. On a nearby hill was a fortified tower called a motte. The motte was an unproductive place to hang out, but it was safe. So, during attacks, residents would flee the bailey for the motte, where they could ward off enemies.

In rhetorical terms, the bailey is the desired but hard-to-defend controversial opinion. The motte is the less desired yet defensible opinion that nearly everyone agrees with, and which the arguer retreats to if unable to defend the bailey. 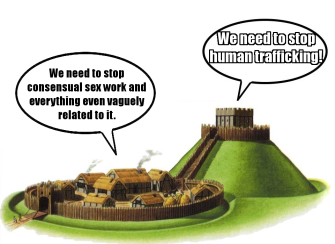 In 2014, the psychiatrist Scott Alexander (not his real name) helped popularize the motte-and-bailey doctrine after writing about it on his blog Slate Star Codex, a popular rationalist hub. Alexander wrote:

“[The doctrine] draws its strength from people’s usual failure to debate specific propositions rather than vague clouds of ideas. If I’m debating “does quackery cure cancer?”, it might be easy to view that as a general case of the problem of “is quackery okay?” or “should quackery be illegal?”, and from there it’s easy to bring up the motte objection.”

Overlapping with the Slate Star Codex community is a subreddit named after the doctrine called r/TheMotte, which describes itself as a place for people to “test their ideas in a court of people who don’t all share the same biases.” The subreddit calls on users to “always attempt to remain inside your defensible territory, even if you are not being pressed.”

And then there are the memes. It’s unclear who created the first one, or when, but since at least 2018 people have been posting motte-and-bailey memes to critique the often-shoddy ways in which people argue about issues ranging from immigration, to the problems of capitalism, to ideas about truth. 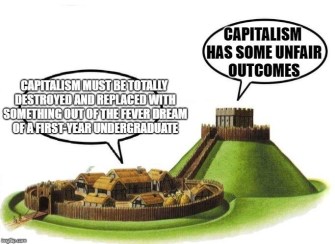 Motte-and-baileys aren’t a new phenomenon. But it does seem like they’re becoming a rhetorical weapon of choice in political and culture-war arguments.

“I think [the motte-and-bailey doctrine] is a very useful concept to have in my arsenal of concepts to analyze what’s going on,” Kenny Easwaran, philosophy professor at Texas A&M University and co-editor of the Journal of Philosophical Logic, told Real Clear Investigations. “It’s behavior we’ve seen, but we see so much more of it now.”

It’s hard to say why. You could blame the fall of nuance, increasing political polarization and the absence of a middle ground, and the tendency of social media to incentivize tribalism, to name a few.

It’s also worth considering how motte-and-baileys change when they include moral claims. For example, it’s one thing to pull a motte-and-bailey to advance an argument about, say, 18th-century economic theory. But hot-button issues change the game. Take debates about transgender and intersex athletes as an example.

A: Every transgender athlete should be able to compete in whichever gender category they identify with.
B: Wouldn’t that give some athletes an unfair or even dangerous physical advantage?
A: Transgender people have been discriminated against for too long, it has to stop.

Everyone agrees with the motte: transgender discrimination should stop. But notice how it becomes much easier to advance the bailey when the motte is a sensitive moral claim that’s (rightfully) taboo to disagree with?

You can see this play out in political arguments. For example, a Trump supporter might argue for unprecedentedly harsh immigration policies at the U.S./Mexico border. (That’s the bailey). If someone challenges that position, the Trump supporter could shame them for being unpatriotic, considering immigration reform is part of the Make America Great Again platform, and who doesn’t want to make America great (motte)?

Similarly, someone might question Black Lives Matter’s goal of disrupting “the Western-prescribed nuclear family structure requirement” (bailey). They might get a reply like: “What, are you trying to argue that Black lives don’t matter (motte)?” 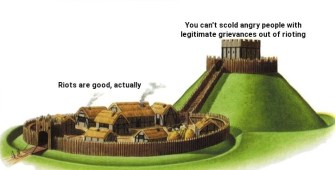 It might sound like motte-and-baileys are always easy to spot. But as Alexander wrote on Slate Star Codex, “all fallacies sound that way when you’re thinking about them.”

Deaths of despair are skyrocketing in the U.S., while at the same time, they are falling in other wealthy countries. What are we doing wrong?
13.8

Other than Doctor Strange, is the Multiverse good for anything?

Quite a lot, actually, even though it has no identifiable value as a scientific concept.
Thinking

If argumentation led to nothing, it would soon be thrown into the evolutionary dustbin.
Up Next
Starts With A Bang

Ask Ethan: Do Neutrinos Always Travel At Nearly The Speed Of Light?

Neutrino detectors, like the one used in the BOREXINO collaboration here, generally have an enormous tank that serves as the target for the experiment, where a neutrino interaction will produce […]