Mental fatigue is always a problem in our distraction-heavy world, but it’s particularly troublesome as we constantly check for the latest updates on the state of our societal health. Specifically, mental fatigue occurs after extended periods of cognitive demand. This results in an inability to focus on tasks and can often lead to accidents and an inability to retain information.

Since the advent of the smartphone plenty of research has focused on helping us combat mental fatigue. In his bestselling book, Matthew B. Crawford suggests craftsmanship—he left a D.C. think tank to become a motorcycle mechanic—is as intellectually stimulating as it is physically demanding, improving attentional skills. For others, such as computer science professor Cal Newport, it means getting off of social media and only checking email once a day.

Fixing antique motorcycles or eschewing social media is not in everyone’s cards, however. Thus, practices like meditation have entered the national conversation. Though some question its validity as a performance enhancement technique—they believe it should only be a tool for spiritual development and self-introspection—there’s solid evidence that a regular practice offsets attentional deficits.

All it takes is 10 mindful minutes | Andy Puddicombewww.youtube.com

Then there’s an intriguing new study from the University of Southern Denmark Faculty of Health Sciences. The team of Johanne L. Axelsen, Ulrich Kirk, and Walter Staiano (from the University of Valencia) discovered that the combination of mindfulness meditation and binaural beats helps combat mental fatigue and regain attentional abilities.

Binaural beats are two tones, one played in each ear at slightly different frequencies. An auditory illusion occurs when your brain produces a beat at the junction of those two frequencies. Thus far, research has been spotty on their efficacy. Most positive reviews have been anecdotal. For some people they seem to have no effect. For others (such as myself) they make a great accompaniment to a meditation practice. Beyond focus, binaural beats are said to help reduce anxiety, increase relaxation, and assist in creating positive moods. 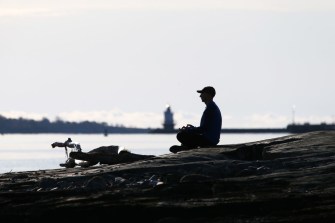 The SART was designed to fatigue the groups. As the team writes,

Those with a longstanding mindfulness practice and a history of using binaural beats seem to maintain sustained attention even after being fatigued. Less experienced meditators are more easily tired, while those told “just relax” without a framework also fared poorly. The team found that four weeks of mindfulness training was enough to help combat cognitive exhaustion.

Such information is always useful, but especially so at this moment. Times of uncertainty are cognitively brutal. This is the first time in history that the entire world is experiencing an epidemic while being connected to social media. In some ways, it can be calming, but the opposite is also occurring, with conspiracy theories and misinformation rampant.

Unplugging, as Newport suggests, is great for your mental health, but let’s face it: many of us will keep our eyes glued to the screen. Taking some time out, even 12 minutes, appears to help. Right now, we’ll take progress in inches.

Tags
cognitive sciencemedical researchmeditationmental healthmusicneuroscience
In this article
cognitive sciencemedical researchmeditationmental healthmusicneuroscience
Related
The neuroscience of loving music
Humans are musical animals four million years in the making, explained by music expert Michael Spitzer.
▸
8 min
—
with
Michael Spitzer
Neuropsych
How you breathe affects your brain
Your breathing rhythm influences a wide range of behaviors, cognition, and emotion.
Health
What happens when regular porn watchers abstain for a week?
Researchers watched for signs of withdrawal — but didn’t find any.
Neuropsych
Daily caffeine intake temporarily alters your brain structure
Compared to people who took a placebo, the brains of those who took caffeine pills had a temporarily smaller gray matter volume.
Health
What decades of research tells us about living the good life
Warm relationships protect your mind and body from the slings and arrows of life.
Up Next
Starts With A Bang
We All Learned Physics’ Biggest Myth: That Projectiles Make A Parabola
It’s an incredibly useful approximation. But the truth takes us far deeper.Anyone who’s ever taken a physics course has learned the same myth for centuries now: that any object thrown, shot, […]