Assistant professor of behavioral neuroscience at CU Boulder Zoe Donaldson has recently led a year-long study of prairie voles, who are in the 3-5% of mammals (along with humans) who tend to mate for life.

“In order to maintain relationships over time, there has to be some motivation to be with that person when you are away from them. Ours is the first paper to pinpoint the potential neural basis for that motivation to reunite,” explains Donaldson. 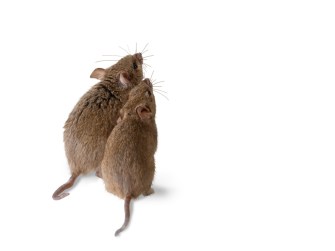 This research ground lead to new therapies for individuals who struggle with this kind of emotional connection. Photo by torook on Shutterstock

Donaldson and her team used tiny cameras and a new technology called in-vivo-calcium imaging to analyze the brains of prairie voles at three separate times:

When the voles were together in the same area, their brains looked and reacted the same way. However, after separating the voles, it was discovered that a unique cluster of cells in the nucleus accumbens fired up when they were reunited.

In fact, the study proved that the longer the voles had been paired before being separated, the closer their bond became and the glowing cluster that lit up became stronger during their reunion.

It’s interesting to note that a whole different cluster of cells lit up upon them being introduced to a stranger vole, suggesting that these specific cells may actually be there for the purpose of forming and maintaining bonds with others.

This study confirms that monogamous mammals (voles and humans alike) are very uniquely hard-wired to mate with others. We have a unique biological drive that urges us to reunite with people we care for, and this drive can be one of the reasons we fall under the 3-5% of mammals that seek out monogamy.

What does this mean for the future of human behavior studies?

As far as research goes, this is quite groundbreaking – as this could potentially give us insight into various kinds of therapies for individuals who are autistic or individuals who struggle with severe depression and/or other disorders that make these kinds of emotional connections difficult.

There is still much to learn about these specific series of events that happens when we’re reunited with a mate after a period of separation. For example, it’s unclear if this “neuronal code”, so to speak, is associated with emotion in humans the same way it is associated with desire in voles.

According to Donaldson, the research in this department is only just beginning, and the definitive outcome of this study is that mammals are quite literally hardwired to be monogamous mammals.

This isn’t the first time a study like this has been conducted, even though this particular study has unveiled new neuronal clusters that had not been previously accounted for.

There have been many other studies of mammals (from small rodents all the way up to human beings) that suggest we are not only hardwired to seek out intimate connections through monogamy, but that we are also extremely and profoundly shaped by (and perhaps even dependent upon) the experiences we have with those mates.

“A deep sense of love and belonging is an irresistible need of all people. We are biologically, cognitively, physically, and spiritually wired to love, to be loved, and to belong. When those needs aren’t met, we don’t function as we were meant to.”

This idea is backed up by countless studies, including Dr. Helen Fischer’s revolutionary study back in 2005, which included the very first fMRI images of “the brain in love”.

This study concluded that the human brain doesn’t just work to amplify positive emotions when we experience romantic love, but that the neural pathways responsible for negative emotions (such as fear and anxiety) are actually deactivated.

Pain makes sense from an evolutionary perspective. What’s puzzling is why so many of us choose to seek out painful experiences.
The Present

Can we stop mass shootings? The first step is collecting data, and these authors have done just that.
Thinking

You can love a romantic partner, but also a pet, a book, God, or the sound of someone’s voice. We need many more words for love.
The Present

Digital nomads can fully immerse themselves in their surroundings while advancing their career and stimulating the local economy. But there is one potential downside.
Up Next
Hard Science

4.33-billion-year-old crystal linked to an ancient collision on the Moon