One major advancement of Buddhism was the implementation of a universal approach to self-realization. Until that point — and, for the most part, ever since — spiritual platforms have relied on making an enemy of “the other.” Another group must stand in the way of your tribe’s glory; it is up to your faith to dismantle their structures for you to ascend to imagined heights.

Siddhartha Gautama pushed all that to the side. Well aware of rampant tribalism across India, he often had to play local politics in his founding of the many sanghas being created. The practice itself, however, did not rely on external enemies. The great challenger is your own mind, a lesson he was taught, his adherents say, during a battle with the demon-god Mara one fateful evening (or week, depending on the reading of that particular mythology).

Indeed, recent research suggests that our minds play a critical role — as New Agey as it may sound — in how we perceive and, in turn, experience our physical realities.

Before we get into that, though, at the heart of Buddhism is the Four Noble Truths, which coincide with the researchers’ findings. The first: all life is dukkha. The Pali word is most famously translated as “suffering,” which fits into the mindset of other religious traditions well yet does not serve the Buddhist understanding perfectly. Suffering is often extrapolated and applied to the persecution of Jews, Christians, and Muslims, all of whom have been (and continue to be) oppressed due to political circumstances. Even Buddhists don’t escape this fate.

It’s not that “suffering” is wrong, per se, but we have to recognize the type of suffering Gautama implied. Other translations of the term include difficult, causing pain, distress, and my personal favorite, uneasy. You suffer because your mind is restless. To put it another way: you wish the world was one way, and when it isn’t you feel discontent. The other three noble truths address how not to feel this way.

At the end of the four directives lies the eightfold path, all of which begin with “right”: right view, right resolve, right speech, right conduct, right livelihood, right effort, right mindfulness, and right concentration. In this sense, “right” is not opposed to “wrong” as much as it is a reminder that there are a variety of ways to perceive and act in accordance with reality. Many paths lead to suffering/uneasiness/discontent. Some do not. Understanding and implementing the latter is the path of Buddhism.

The psychological emphasis of this philosophy is why Buddhism has been extensively studied by neuroscientists. While trial regarding the neurochemistry of faith exist, the literature is ripe with the neural emphasis of mindfulness, meditation, and Buddhist practices. Since no metaphysics is involved with secular Buddhism — plenty of sects believe in heavens and hells, but they are not of concern here — researchers home in on practical applications without getting weighed down in tribal differences.

While it takes a book (or many) to break down the entirety of the eightfold path, we’ll keep it simple: the goal is practicing higher-order emotions, such as altruism, empathy, and compassion. If you are comfortable in your own skin, you afford such attitudes in your relationship to others. When you’re confident and secure, you don’t get bogged down by “the other.” You act with empathy, compassion, and kindness.

Which brings us to a new study, conducted at the Universities of Exeter and Oxford and published in the journal Clinical Psychological Science on February 6. The research team assigned two short-term self-compassion exercises to 135 participants alongside control conditions that involved negative, neutral, and positive valences. The results: people feel better, physically and mentally, when they practice kindness.

Specifically, when practicing self-compassion, the volunteers experienced reduced arousal — heart rate and skin conductance, increased parasympathetic activation, heart rate variability, etc. Their nervous systems responded better when their mindset invoked kindness instead of excitability and agitation. It’s an interesting finding, however “the underlying processes for this,” as the researchers explicitly state, are still “not well understood.”

On the screen, this all may sound quite basic. Applying it in the moment is an entirely different challenge, though. Indeed, this practice of self-compassion is a challenge well-suited for modernity regardless of spiritual belief.

In a quick review, we opened by discussing Buddhism as it’s tailor-made for such a study, yet kindness can be applied regardless of religious affiliation. When volunteers were instructed to be self-critical, the reaction was physical: their heart rate increased and they sweated more, both indicators they were entering fight-flight-freeze mode. When they focused on self-compassion that switch was dialed down. Their threat response turned off. 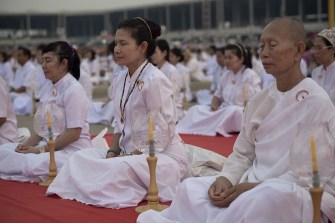 Buddhist devotees meditate during a ceremony at the Dhammakaya Temple in Bangkok on February 22, 2016 on the occasion of Makha Bucha day. Photo credit: Nicolas Asfouri / AFP / Getty Images

“Our study is helping us understand the mechanism of how being kind to yourself when things go wrong could be beneficial in psychological treatments. By switching off our threat response, we boost our immune systems and give ourselves the best chance of healing. We hope future research can use our method to investigate this in people with mental health problems such as recurrent depression.”

The separation of “mind” and “body” is a fundamental problem when trying to understand the holistic nature of our thoughts and actions. Every thought has a physical effect. Our nervous system is the conduit between our brain, the seat of the more ambiguous thought-creating machine we call “mind,” and our organs, blood, and the rest of our flesh. We never just train our mind or just train our body.

Gautama understood this connection many millennia ago. He was an ardent yogi before leaving his instructors to found his own school. While he didn’t have EKG or fMRI technology, he could certainly feel his heart rate increase at the outset of certain patterns of thought, as well as notice the cool wash of serotonin during meditation and compassion exercises.

This challenge is daunting when most communication occurs on a screen. It’s hard not to take personally the thoughtless tweets and comments thrown around on a daily basis. Yet if you recognize the pain and suffering of those behind the screen, you can reframe your response in a more compassionate way. Sometimes it works, sometimes not, but the important lesson is for your own mental and emotional sanity. Everything else, as Gautama realized the night Mara tossed a thousand temptations his way, is just noise.

Your inner voice can be the devil on your shoulder or the angel. It depends on where your focus lies.
Neuropsych

Will nature or nurture win out?
The Well

The secret habits that control your life

Habit-forming rituals are subconsciously controlling your life. Here’s how to master them.
▸
with
Wendy Wood
The Present

Shame is a powerful tool that must be used with care.
Up Next
Neuropsych

MDMA shown to increase empathy over other substances

It’s all about the serotonin.