Can light be a factor in eliminating traumatic memories? Japanese scientists found that the long-term memory of flies can be affected if they are kept in the dark. This is the first discovery of the role of environmental light on such memories. The scientists hope to extend this approach to human victims of life-affecting traumas.

Events that are shocking can become a part of our long-term memory (LTM), with new proteins synthesized and the neuronal circuits in our brain becoming altered, explains the press release from researchers at the Tokyo Metropolitan University, who made the breakthrough. These memories can be hard to erase and may lead to post-traumatic stress disorder (PTSD).

Through their research, the team led by Professor Takaomi Sakai from Tokyo Metropolitan University discovered a particular molecular mechanism in Drosophilia flies that affects LTM. To find this, they set up a trauma for male flies by placing them with females who already mated. According to the courtship conditioning paradigm, in such situations mated females stress the unmated males to such an extent that they remember the experience, unwilling to ever mate with any more females – even if they were to be exposed to those that are unmated.

To see if they could reverse this traumatized behavior, the scientists placed male flies in the dark for days. They discovered that male flies who were in the dark for two or more days, were again willing to mate with females. In contrast, the flies who were kept on a normal day-night light cycle were still not interested in any mating. The researchers concluded that light had an affect on LTM. 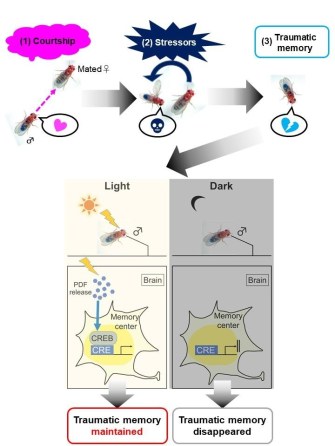 Scientists found that flies kept in the dark did not keep long-term traumatic memories because the Protein-dispersing factor (Pdf) was not released. This resulted in the lack of production of the cAMP response element-binding protein (CREB) in the fly brain’s memory center.

Furthermore, they pinpointed the brain protein called the Pigment-dispersing factor (Pdf), which responds to light. They also saw that Pdf, in turn, impacts the protein known as the cAMP response element-binding protein (CREB) in the area of the insect brains that is linked to memory and learning, thus figuring out the molecular mechanism involved in the LTM process. If the fly was kept in the dark, the Pdf was not released and, in its turn, the cAMP protein was not produced.

This research shows that environmental factors can affect long-term memories and may lead to new treatments for trauma victims.

Check out the new study “Environmental Light Is Required for Maintenance of Long-Term Memory in Drosophila” in the Journal of Neuroscience.

Does memory start to work only at a certain age?
Up Next
Neuropsych

Emotional intelligence: Why each of us should aspire to be more like Richard Feynman

The physicist was both a gentleman and scholar.