Many men don’t like their power being questioned, a difficult situation in the #metoo era. Numerous responses catering to men’s egos have rushed in, the spectrum ranging from a revival of men’s groups in the heritage of Robert Bly and Michael Meade, to the sexual spirituality (and slightly misogynistic) David Deida to the masculine fist-waving (and more misogynistic) rants of Jordan Peterson to the blatantly misogynist and racist tropes of the anti-masturbation (except once a month, in the presence of a woman) cult of the Proud Boys.

At one end, a thoughtful discourse about masculinity in the modern world. At the other, most every red-faced troll on social media complaining about some imagined right being stolen from them.

So it shouldn’t be surprising that when the American Psychological Association released new guidelines for working with boys and men, there was a minor uproar. (To be exact, the guidelines were released last August, but did not hit the media cycle until the APA sent out this tweet last week promoting the paper.) The association emphasized that what we term “traditional masculinity ideology” has the potential to negatively affect mental and physical health. Men responded by kicking and screaming and deriding the report, a certain sign of sound mental health.

As the researchers make clear in the introduction, boys and men are “disproportionately represented” when it comes to: learning difficulties, behavioral problems, prison populations, substance abuse, violent crimes (both committing and being the victim of), and suicide. Over the last week a number of magazines and websites have called the paper “controversial,” though if you actually read the guidelines, there’s little controversy in it. Data aren’t convenient, yet avoiding what they tell us isn’t helpful.

At the center of the report are methods for dealing with male fragility. The ten guidelines are designed to help experts deal with boys and men that grow up in cultures that teach them to tuck away their feelings and pretend they don’t exist, leading to the problems listed above. The inability to articulate feelings is a certain sign that trouble is ahead. The report could be one step toward solving this problem, if we pay attention to it.

While a backlash ensued—mostly from the American Right, which instead of focusing on the content decided to sound off about white males losing their grip—pundits would have been well-served simply by reading guideline #1: “Recognize that masculinities are constructed on social, cultural, and contextual norms.”

As has been known for some time, if you tell girls they’re worse at math than boys, they score lower. Don’t inform them of this falsity and numbers shift. Though the efficacy of the infamous 1940s “doll test” is debated today, priming someone by hinting at results is a well-known means for tilting the playing field. A recent Stanford study shows that information changes not only your outlook, but your actual physiology. What we think is what we become.

Which is how cultures are created: Invent the norms, then treat them as biological facts. If male power were a given there would be no such thing as matriarchies. One modern example that flips the norm is Tuareg culture. While not exactly a matriarchy (but matrilineal), men in this Muslim subset veil their faces while women are not required to do so. In other cultures throughout history, the queen is the leader. The culture was constructed around an idea; the idea became the founding doctrine of the culture.

Or consider pederasty, the Greek (among others) rite of passage in which an adult male has a homosexual relationship with a pubescent boy. Today the Catholic Church is rightfully criticized for covering up hundreds of similar scandals when priests take advantage of aspiring members of their clergy and membership. Yet for some time such a relationship was endorsed as a natural way of life. Culture is an invention that suits the needs of those in power. Older men like little boys and all is good until that’s no longer the case. Enter the APA guidelines.

The APA guidelines, in brief

GUIDELINE 1
Psychologists strive to recognize that masculinities are constructed based on social, cultural, and contextual norms.

GUIDELINE 2
Psychologists strive to recognize that boys and men integrate multiple aspects to their social identities across the lifespan.

GUIDELINE 3
Psychologists understand the impact of power, privilege, and sexism on the development of boys and men and on their relationships with others.

GUIDELINE 4
Psychologists strive to develop a comprehensive understanding of the factors that influence the interpersonal relationships of boys and men.

GUIDELINE 6
Psychologists strive to support educational efforts that are responsive to the needs of boys and men.

GUIDELINE 7
Psychologists strive to reduce the high rates of problems boys and men face and act out in their lives such as aggression, violence, substance abuse, and suicide.

GUIDELINE 10
Psychologists understand and strive to change institutional, cultural, and systemic problems that affect boys and men through advocacy, prevention, and education.

To understand what each of these mean, read more here. 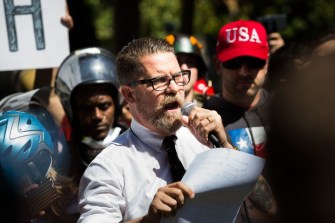 Gavin McInnes, a Canadian right wing provocateur and Vice Media co-founder, addresses the crowd gathered during a pro-Donald Trump rally at Martin Luther King Jr. Civic Center Park in Berkeley, California on April 27, 2017. The rally was held in protest of the cancellation of a planned talk by Ann Coulter on the campus of the University of California Berkeley, amid security concerns.

Tell a human they’re privileged and it becomes an integral part of their identity, which is another guideline in this new document. In fact, this is the first set of guidelines the association has ever produced specifically addressing men, though similar rules for working with women and ethnic minorities have previously been issued. This has effectively set the standard of “white, Western men are the norm,” as the NY Timesreports:

The guidelines add that men and boys have historically been considered a “normative referent” for psychology. In other words, men — especially white, heterosexual men — were overrepresented in Western studies, and their psychological needs and habits were considered more universal than they actually were.

When beginning from here—white, heterosexual men as the standard to judge all others—criticism is certainly threatening. A thoughtful, honest, and engaged discourse isn’t possible when one group feels they have ownership of how the game is played.

When actually reading the guidelines you realize the APA has issued a call for help for a violent and emotionally troubled subset of our species; tips for young men dealing with the fact that they’re vulnerable animals. Coming to terms with this is psychologically sound; denying it is part of the problem, one greatly amplified in the social media age.

While social media allows for the widespread dispersal of the aggrieved privileged, it has also created the conditions for important issues like this to be discussed. “Me too” is more than a hashtag; it’s a paradigm-shifting cultural change. The previous structure wasn’t working, as evidenced in this report and by looking out basically any but a very few windows across the country. Others want a fairer playing field, one in which they don’t have to feel threatened simply by expressing opposing viewpoints. The status quo always needs to be challenged to test its validity.

Masculinity is owning all of you who are, your vulnerabilities, insecurities, and confusion. It’s bringing that to the table in a courageous display of empathy; not assuming your assumptions are the biological and philosophical foundation for culture; knowing when to yield when called for, and not thinking yourself any less of a man for being open to suggestion; and looking someone you don’t agree with in the eye and having a conversation, not puffing up your rhetorical chest and screaming at a screen because life wasn’t what you thought it would be.

No set of guidelines is perfect. But without any guidance, you can expect plenty of men to remain lost.

Hoarders know their habits are abnormal, and yet they cannot help themselves. Maybe you can help them.
Up Next
Hard Science

4 anti-scientific beliefs and their damaging consequences

The rise of anti-scientific thinking and conspiracy is a concerning trend.