More and more, we’re learning about the mind-body connection and how it affects health. We’re also realizing that epigenetic changes from our parents and the emotional climate in which they lived, can plant negative seeds in us. In our own lives, medical researchers in the last several decades have figured out that chronically feeling negative emotions can weaken our immune system, while long-term positive ones boost it.

These emotions include depression, chronic stress, and loneliness. Steve Cole, Ph.D., from the Cousins Center for Psychoneuroimmunology at UCLA found out how it works. He proved a few years ago that negative emotions affect the expression of genes associated with the immune system. They suppress them. While positive emotions boost expression.

But how far back does the effect go? A new study published in the Proceedings of the National Academy of Sciences has a surprising answer. Here, researchers found that adults who endured a contentious childhood had suppressed immune systems even decades later, making them more susceptible to the common cold and other illnesses.

Psychologists from a number of universities contributed to the study. They wanted to know how a parent’s separation and how they handled it affected a child’s health long-term. Those parents who had a contentious separation, who wouldn’t speak to one another or yelled at each other often, had children who, when they reached adulthood, were three times more likely to get sick with things like the common cold, compared with those whose parents interacted civilly. 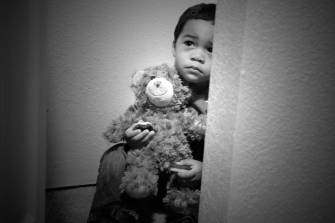 Children who had constantly bickering parents were more likely to have suppressed immune systems later on. Flickr.

To conduct the study, researchers recruited 201 normal adults. First, they were quarantined. Then, each was exposed to the virus that causes the common cold. Researchers monitored them for five days, to see if they’d get sick. Those who had suffered a childhood trauma, say from a family where a hostile separation or divorce occurred, were significantly more likely to develop the common cold. The good news is, those parents who separated but kept it civil were just as likely to have adult children with normal immune systems as those who stayed together.

Michael Murphy was one of the researchers on this study. He is a psychology postdoctoral research associate at Carnegie Melon University. He said, “Early-life stressful experiences do something to our physiology and inflammatory processes that increase risk for poorer health and chronic illness.” They aren’t sure exactly what mechanisms are behind it, yet. According to the study, those who endure very stressful childhoods were impacted even two to four decades later.

Professor of Psychology Sheldon Cohen from Robert E. Doherty University, was another collaborator. He said, “Our results target the immune system as an important carrier of the long-term negative impact of early family conflict.” He added, “They also suggest that all divorces are not equal, with continued communication between parents buffering deleterious effects of separation on the health trajectories of the children.” One substantial limitation was that the study had a very small sample size. Even so, it provides food for thought and will spur more investigations which will, in time, deepen our understanding of the mind-body connection and how it affects our health.

We seem to have a “progression bias” that nudges us toward pro-relationship decisions and away from breaking up.
Up Next
Politics & Current Affairs

Scientists Have Had Enough. They’re Starting to Run for Office.

Scientists are starting to run for office to bring evidence-based reasoning back to government.