We all know the feeling of being insatiably hungry, but have you ever stopped to consider what kind of hunger you’re really feeling and what that means?

True hunger builds gradually, and any type of food you find will satisfy your appetite. Once you’ve eaten enough, you stop. There are usually no lingering feelings of shame because you’re providing your body with the energy it needs, even if the meal wasn’t so healthy.

Emotional hunger, on the other hand, is an unhealthy response to stress that causes cravings for various types of food. This kind of hunger isn’t as easy to stop and leads to over-eating, which usually makes you feel guilty.

Boredom hunger, where you aren’t hungry but snack out of boredom (most of us do this while we watch Netflix), sometimes falls under the category of “emotional eating.” Even if we aren’t overly emotional at the time, stress and boredom mix well together when you’re avoiding a task you find difficult or some other problem you don’t want to address. 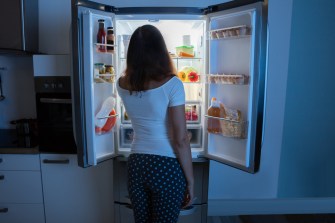 Escaping self-awareness and a surge of dopamine are two main reasons people eat when they are bored.Photo by Andrey_Popov on Shutterstock

There are many reasons why you may find yourself illuminated by the refrigerator light every time you’re feeling a bit restless.

A 2015 study suggests that we eat to escape our self-awareness.

“Being bored affectively marks an appraised lack of meaning in the present situation and in life,” according to the researchers of this study. “Boredom increases eating in an attempt to distract from this experience, especially among people high in self-awareness.”

Three studies were conducted to see how eating habits were affected by boredom. In the first study, boredom positively predicted calorie, fat, carb, and protein intake for the participants. In the second, a high (compared to low) boredom task increased the desire to snack compared to eating something healthy. In the third study, people who had high (compared to low) self-awareness consumed the most food during their peak times of boredom. Something important to note about the final study is that the subjects with increased self-awareness liked to eat exciting healthy food as well as exciting unhealthy food.

This suggests the act of selecting or cooking healthy recipes may play a factor in decreasing boredom.

The neuroscience of eating and boredom…is dopamine to blame?

Susan Carnell, Ph.D., assistant professor in the Department of Psychiatry and Behavioral Sciences at Johns Hopkins University, believes there is another reason we may be searching out food to satisfy our bored minds.

According to Carnell, dopamine likely plays a role in the boredom-hunger paradigm. Dopamine is a neurotransmitter that is crucial to our motivation levels. Dopamine is present during sex, when we fall in love, and when we’re satisfying an addiction — it’s a pleasure-reward reaction that drives our motivations to do things that give us even more dopamine.

“The release of dopamine in the brain can be so stimulating and motivating that rats will lever-press for it to the exclusion of other crucially important activities like sleeping and eating,” Carnell explained.

People who have naturally lower levels of dopamine are more likely to seek out and become addicted to dopamine-producing substances or activities like alcohol, drugs, and gambling. 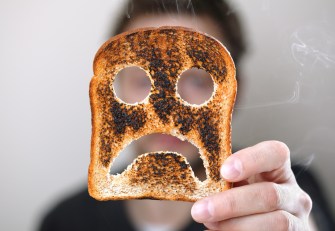 How can I stop eating when I’m bored?Photo by Brian A Jackson on Shutterstock

Occupy yourself by doing something fun.

Whether it’s checking something off your to-do list, starting a craft like scrap-booking, or going for a nice walk, one of the best things you can do when you’re feeling hungry due to boredom is to cure the boredom.

Doing something to occupy your time, even just temporarily, will likely get your mind out of the fridge and focused on something else until the hunger passes.

Dehydration and thirst are very commonly mistaken for hunger. Instead of reaching for a bag of chips next time you’re feeling hungry, have a large glass of water first. You can even add a splash of lemon or lime to the water to trick your mind into thinking this is a little treat.

Sometimes pretending as though you’re eating is enough to fill the need to eat, especially when you’re not hungry. Chewing gum is a great replacement for eating food you don’t need to be eating.

Another idea to keep your mouth occupied is to call a friend you haven’t heard from in a while or start a fun conversation with your spouse or kids. Conversations are a great way to distract your mind from eating when you’re not really hungry.

If Dr. Carnell is right, what you need is a big surge of dopamine, so why not get physical? Exercise sends a rush of dopamine throughout your system (the same as snacking on some popcorn might), and it’s way more healthy.

You can slide on your running shoes and go for a jog or you can lay on the carpet and do some ab exercises while you watch Netflix. Either one will accomplish the same goal.

Wait out the boredom to see if you’re really hungry.

Give yourself 30-60 minutes to determine whether what you’re feeling is hunger due to boredom, or hunger due to really being hungry. Sometimes it’s hard to tell the difference. True hunger will build and remain consistent, but emotional hunger (or boredom hunger) will fade as your mind becomes occupied with other things.

Virtually all the statistical methods researchers commonly use assume potential mating partners decide who they will have children with based on a roll of the dice.

Terrified of blushing? You might have erythrophobia.
Up Next
Life

Nanosensor can alert a smartphone when plants are stressed

Carbon nanotubes embedded in leaves detect chemical signals that are produced when a plant is damaged.