It’s the last question of the quiz, and Chloë knows the answer: it’s Bolivia. Yes, it’s definitely Bolivia. She went there last year, so she ought to know.

But then Shaun says it’s Panama, and all the others agree with him. Chloë’s sure it’s Bolivia, but Shaun’s so confident, the others now are nodding furiously along with him.

“What do you think, Chloë?” she’s asked. She pauses for a moment.

The question of conformity

We’ve all been Chloë. Humans are social animals with families, tribes, and workplaces. So, it’s no wonder that we try to fit in or conform. Social rejection is devastating, and we’re biologically wired to avoid it. A sense of belonging and cooperation is essential to dealing with the world. Sometimes, though, this instinct can take us to ridiculous or dark places.

In the decades after World War II, politicians and academics were curious to know how it was that a country like Germany — so steeped in tradition, culture, and education — could fall into such a terrible regime within such a short time. Psychologists Stanley Milgram and Philip Zimbardo conducted experiments to answer a question many everyday people were asking: “Could it happen here?”

Would you tell a laughing group of people that a joke was sexist or racist or bigoted? In your heart of hearts, do you think that you — surely a loving and kind person — would have had the courage to resist Nazism?

While the Milgram and Zimbardo experiments are pretty famous, one of the lesser known experiments was done in the early 1950s by Solomon Asch. They demonstrated just how far humans are willing to go for the sake of “fitting in” and conforming to the rules.

Asch had his volunteers perform a simple task: they were all given a series of lines drawn on a card and asked to choose which line was longest out of three options. The right answer was laughably obvious; for instance, line A was clearly the longest. When they were alone, people chose correctly nearly every time.

Asch then put his subjects in a group with actors who had been instructed to deliberately choose the wrong answer. Under these conditions, 75 percent of subjects agreed with the group consensus at least once, even though they were blatantly wrong.

What makes us conform?

A little surprised by this, Asch went on to do a series of related experiments and documented the factors that made it more or less likely that people will “conform” with the group consensus. Here are some of them:

The difficulty of the task. When there’s a higher degree of ambiguity or uncertainty about the answer (for instance, the lines in the experiment weren’t so obviously different), we’re more likely to agree with others.

Reliability of the source. If someone within the group seems more reliable or knowledgeable about a topic — like a doctor about a disease — then we are more likely to go along with that person’s view.

Publicity. People are much more likely to conform if they have to declare their judgment publicly rather than privately.

Degree of unanimity. The presence of merely one or two dissenting voices in a group of any size greatly increases the chances that others will not conform. Even one rebellious response is enough to make others follow suit.

The implications of conformity 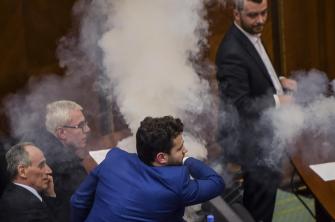 Of course, conformity has implications far beyond quizzes with your friends or measuring lines.

A similar but more alarming study was conducted by John Darley and Bibb Latané in the 1970s. In this study, they had subjects appear for an apparent “job interview.” As the subjects were waiting, smoke was slowly pumped into the room. If people were alone, they always would check to see what was wrong, or they would get up and leave.

But when subjects were in a room with actors pretending as if nothing was wrong, the majority made no move whatsoever. This happened despite people coughing and rubbing their eyes from all the smoke. Amazingly, people were willing to risk their own health rather than break with group behavior. (No wonder many of us are hesitant to interrupt a meeting at work to open a window because it’s far too hot in the room.)

What do these experiments suggest about conformity? Well, as Asch said, we learned “that intelligent and well-meaning young people are willing to call white black.” He concluded that it was “concerning.” Indeed.

Would you tell a laughing group of people that a joke was sexist or racist or bigoted? In your heart of hearts, do you think that you — surely a loving and kind person — would have had the courage to resist Nazism? Psychology experiments strongly suggest you would not.

Undoubtedly, there are huge evolutionary, social, and emotional benefits to conformity. Many times, it has done great good. But equally true is that conformity can also bring out the darkest and worst in us.

Does memory start to work only at a certain age?
Up Next
Starts With A Bang

Which ‘Hints’ Of New Physics Should We Be Paying Attention To?

The April 11, 2017 reconstructed image (left) and a modeled EHT image (right) line up remarkably well. This is an excellent indication that the model library the Event Horizon Telescope […]