“Gay and lesbian couples, like straight couples, deal with the everyday ups-and-downs of close relationships,” Dr. John Gottman of the Gottman Institute explains in his research. Gottman and his team of researchers conducted a 12-year long study that uncovered some of the differences in how same-sex couples and different-sex couples disagree, argue, and resolve conflicts.

Overall, the relationship satisfaction and quality were about the same across all couple types (gay, straight, lesbian). However, the study did find some differences in how same-sex and different-sex couples argue.

To better understand how same-sex couples are having healthier arguments that lead to conflicts being resolved more constructively, we look at some of Gottman’s findings and spoke with a therapist on the topic. 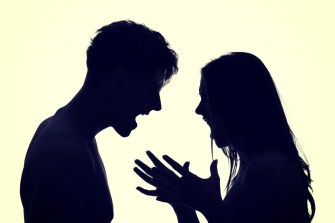 Same-sex couples use fewer controlling and hostile tactics during disagreements.

Dr. John Gottman and his colleagues discovered that, during a disagreement, same-sex couples are less likely to display belligerence or domineering attitudes than heterosexual couples.

“The difference in these ‘control’ related emotions suggests fairness and power-sharing between the partners is more important and more common in gay and lesbian relationships than in straight ones,” Gottman explains.

Things don’t get as personal in same-sex disagreements.

This trend suggests that same-sex couples are able to disagree without taking things personally, whereas straight couples are more likely to be offended when their partner comes to them with a conflict.

According to Gottman’s observations, unhappy gay and lesbian couples were less likely to show visible signs of aggravation such as elevated heart rate, sweaty palms, and jitteriness. Different-sex couples, on the other hand, had elevated physiological symptoms that signify they may have trouble calming down in order to resolve the conflict constructively.

Same-sex couples are more likely to try to offer encouragement rather than criticism or lecturing when it comes to lifestyle choices.

Your partner can have a very positive or very negative impact on your lifestyle. Gottman’s study isn’t the only research available that examines the differences in same-sex and different-sex marriages.

A later (2018) study suggests that same-sex couples are much more likely to try to influence each other’s lifestyle habits (good or bad) with praise or encouragement. The opposite can be said for different-sex couples who tend to lecture or criticize to prove their point. 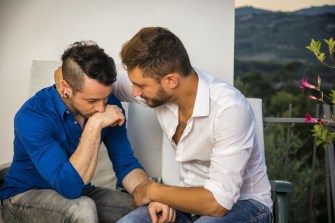 There are simple ways you and your partner can strive for healthier conflict resolutions in your relationship. Photo by ArtOfPhotos on Shutterstock

While these differences in same-sex and different-sex marriages are important and interesting to observe, there are a few universal goals that should be placed on any couple trying to better themselves by striving for healthier conflict resolutions.

Recognize your differences and take space from the other person when you need to.

Each person brings their own experiences, opinions, values, and beliefs to the relationship. Acknowledging that you are two different people who are bound to disagree on things is a healthy part of any relationship.

Accepting and even appreciating those differences for what they can bring to your relationship should be something every couple – gay or straight – should keep in mind, especially during conflicts.

Julie S. Gottman, Ph.D. explains: “If you find that your heart is pounding during an argument, take a break. If you need to leave, you should explain when you’re going to come back and rejoin the conversation. During the time when you’re apart, don’t think about the fight. Instead, practice something that is self-soothing (like reading a book) so that your body can calm down.”

Positivity and laughter might be more important than ever during disagreements.

While it may feel strange to crack a joke during an argument, this 2003 study suggests that one of the reasons same-sex arguments may be healthier is because there is an air of humor and positivity to them. It’s important to end a disagreement on a positive note, and same-sex couples do this far more often than different-sex couples, according to Dr. Gottman’s research.

Equality, understanding, and respect should be paramount in any relationship.

Perhaps one of the reasons same-sex couples are able to resolve conflicts in a healthier way is because they aren’t tied to traditional societal roles or the ideas of how they are “supposed” to relate to each other. This kind of freedom allows the couple to create their own dynamic. When possible, try to understand or sympathize with the other person’s point of view. If you have two very different opinions on something, attempt to communicate your side respectfully and, perhaps more important, really listen to and acknowledge their feelings.

Respect and understanding are two crucial ingredients to a healthy relationship and these are things every couple should strive for.

Buddhism has rules for slaying your enemies. But the real surprise is finding out who your enemies actually are.
Up Next
Hard Science

How to manage your time so you can actually accomplish what you want to.