By November 2020, The Queen’s Gambit had been watched in over 62 million households, making it the most-watched scripted limited series in Netflix history. The thoughtful, stylized show on the patient pursuit of chess was perfectly timed for a world in lockdown. Viewers were enamored with Elizabeth Harmon’s mental prowess as she envisioned dozens of potential moves on the ceiling in order to evade capture and declare victory.

Chess is one of the most intellectually stimulating games in existence. What if you could play it purely with your mind? Given how immersive chess is, can you imagine leaving the physical world behind and truly entering a mind palace?

A game of the mind

It turns out a number of researchers have had such a vision. In a paper published in IEEE Xplore, German professors David Hubner, Albrecht Schall, and Michael Tangermann discuss the evolution of brain-computer interfaces (BCIs) as applied to two-player chess games. Incredibly, 96 percent of moves were correct — and most errors were technical issues that they believe can be fixed.

Chess is played by an estimated 605 million people around the world. While face-to-face interactions will always be an integral component of the intimacy of chess, the game was adopted early on the internet. The ability to play at a distance increased its popularity and accessibility as players found suitable opponents across the planet. 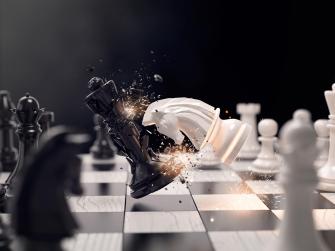 The BCI is based on a two-step process: first, identifying the piece a player wants to move, then moving it on the board. In this study, six players used a BCI chess application (which was based on an open-source Java app) along with an electroencephalogram (EEG) equipped with 31 passive electrodes that detected the chess piece and board position in the player’s mind.

Before the game, each player performed predefined chess moves to calibrate the BCI. During play, they also had a predefined amount of time for thinking about their next move. Specifically, they were given 15 seconds to consider the piece that they were going to move and five seconds to “move” the piece. If the player only had one possible move, the BCI automatically executed it.

Beyond the excitement of controlling a computer with your mind, the researchers recognize a variety of potential applications. For instance, BCI games aid in cognitive training and help motor-impaired people express themselves.

One day, this powerful tool could be in millions of smartphones.
High Culture

Due to deteriorating health, all Beethoven left behind for his final symphony were some musical sketches.
The Present

When Tal Golesworthy was told he was at risk of his aorta bursting, he wasn’t impressed with the surgery on offer – so he came up with his own idea.
Up Next
Thinking

Modern science progresses with an intensity and even irrationality that Aristotle could not fathom.