The human mind is one of evolution’s marvels, and it’s never more marvelous than in our youth. In our first few years of life, our brains create more than a million new neural connections per second. Three months after birth, our cerebellums double in volume to manage those tricky motor functions. We acquire language with no formal instruction. By the time we’re toddlers, we develop the realization that oneself and others have desires, emotions, experiences, and intentions.

That last one may seem a heavy lift for munchkins still grappling with the fact that cows go moo, but research has shown that we come to that realization young. It’s a critical piece in the development of our social cognition, our ability to analyze and apply our knowledge of other people and ourselves within social situations.

Where things become difficult is understanding when and how social cognition develops in children. Because researchers can’t ask infants questions directly, they have to conceive of experiments to perceive thought by way of action. This leads to questions of interpretation. Some researchers think babies are already aware of others, while some argue that our theory of mind solidifies during the social hazing of preschool.

A new clue comes from research recently published in PLOS One, which shows that six-month-olds can recognize when they are being imitated. 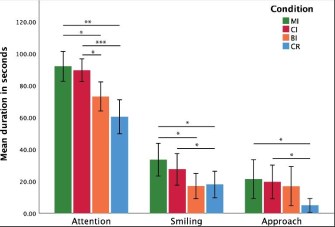 Babies imitated by the researcher (shown in green) gave their imitator more attention, smiles, and approaching behavior than babies who received a non-imitative response (blue).(Photo: PLOS One)

According to the study, the experience of being imitated provides infants the scaffolding for their social cognition. When infants see their actions mimicked, it leads them to realize that these actions have social consequences. They learn that movements, vocalizations, and facial expressions cause others around them to behave in certain ways. It’s much like how they’ll later experiment with cause and effect by banging about blocks.

To measure the effects imitation has on infants, the researchers set up an experiment with six-month-old babies. A researcher would go to the baby’s home and play with them in four different ways. They would either:

A contingent response means the researcher acted as most adults would. Instead of imitating the act of reaching for a toy, they would pick it up and hand it to the baby.

The researchers found that the closer they emulated a baby, the longer they held his or her attention. Such imitation was also correlated with more smiling and a greater desire to approach the researcher.

“Imitating young infants seems to be an effective way to catch their interest and bond with them. The mothers were quite surprised to see their infants joyfully engaging in imitation games with a stranger, but also impressed by the infants’ behaviours,” Gabriela-Alina Sauciuc, a researcher at Lund University and the study’s lead author, said in a press release.

According to the release, the babies being imitated also initiated testing behavior. If a baby smacked the table and the research imitated the action, the baby would then repeat the action several times to see how the adult responded.

“This was quite interesting. When someone actively tests the person who is imitating them, it is usually seen as an indication that the imitated individual is aware that there is a correspondence between their own behaviour and the behaviour of the other,” Sauciuc said.

Babies know when you imitate them – and like itwww.youtube.com

The study had 16 baby participants, five girls and 11 boys, a small but meaningful sample size. In the study, the researchers note that they hope their data will spur additional research into imitation recognition as well as how infants perceive body language and their awareness of another’s intentions toward them.

“By showing that 6-month-old infants recognise when they are being imitated, and that imitation has a positive effect on interaction, we begin to fill up this [research] gap. We still have to find out when exactly imitation begins to have such effects, and what role imitation recognition actually plays for babies,” Sauciuc noted in the same release.

Those are important questions to answer as early caregiver interactions provide the foundation for many social traits. These may include empathy, self-awareness, reading others’ intentions, and cultural norms like turn-taking. They may further expand to other areas of social competency like creativity and confidence. Best of all, for babies and caregivers, imitation provides a fun, and fruitful, way to play.

Tags
brainchildrencommunicationcuriosityparentingpersonal growthrelationshipsyouth
In this article
brainchildrencommunicationcuriosityparentingpersonal growthrelationshipsyouth
Related
The Well
Can we condition ourselves to be heroes?
Neuroscientist Robert Sapolsky on the science of temptation, and the limitations of your brain’s frontal cortex.
▸
6 min
—
with
Robert M Sapolsky
The Future
How a device transmits radio waves with almost no power
Apart from the energy needed to flip the switch, no other energy is needed to transmit the information.
The Well
How to articulate your thoughts effectively
Make it simple. Make it clear. Make it stick. Alan Alda on how to get everyone to understand your thoughts.
▸
5 min
—
with
Alan Alda
Life
How artificial intelligence is helping us decode animal languages
Communication among cetaceans, like whales and dolphins, looks especially promising.
Neuropsych
About 1 in 100 people stutter. What causes it?
The majority of children who stutter will spontaneously recover from it without intervention, but some 20% of people do not.
Up Next
Health
New study connects cardiovascular exercise with improved memory
Researchers at UT Southwestern noted a 47 percent increase in blood flow to regions associated with memory.