An estimated 5.8 million Americans over the age of 65 live with Alzheimer’s disease. That number is increasing: within five years, The Alzheimer’s Association predicts there will be 7.1 million. In 2020, $51.2 billion dollars in Medicaid payments will be made to treat nearly six million patients suffering from this condition.

Even though Alzheimer’s is a well-known disease—it’s the sixth-leading cause of death in the US—it turns out that it’s not well understood. According to a new survey conducted by MDVIP/Ipsos, only 35 percent of Americans know the symptoms even though 80 percent of respondents want to reduce their risks.

Specifically, 74 percent of respondents didn’t realize hearing loss damages the brain; 72 percent didn’t know diabetes is a risk factor for dementia (the disease that Alzheimer’s often leads to); 64 percent were ignorant of the fact that lack of sleep shrinks brain size; and half of respondents didn’t know the impact of emotional well-being on brain health. Over half of those surveyed also didn’t realize high cholesterol and poor dental care play a role in Alzheimer’s disease.

The researchers also discovered disturbing COVID-19-related data. While 58 percent of adults report changes in sleep, 57 percent note mood swings, and 51 recent suffer from emotional withdrawal during this time, only 8 percent are looking for professional help.

“We don’t yet know the long-lasting consequences that the pandemic will have on the brain, and we hope that research such as ours will continue to shine a light on this very serious health issue.” 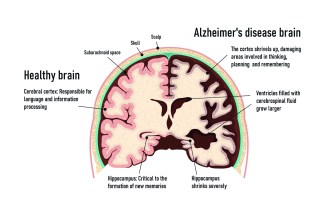 Common early warning signs of dementia, according to Dr. Jason Karlawish, co-director of the Penn Memory Center, include repetitive questions and stories, difficulties with complex daily tasks, and trouble with orientation.

In terms of intervention, exercise, diet, building a brain reserve, and challenging your brain (such as learning a new language or musical instrument) are all proven methods for staving off the ravages of Alzheimer’s. Oxytocin has also showed promise in brain-addled mice, while researchers found positive results for a group of intermittent fasters in promoting neurogenesis.

Epidemiologist Bryan James says that dementia is not an inevitable result of aging.

“It’s simply not pre-destined for all human beings. Lots of people live into their 90s and even 100s with no symptoms of dementia.”

Professor of neurology at Boston University School of Medicine, Andrew Budson, recommends aerobic exercise and the Mediterranean diet. As has long been known, whole grains, fruits and vegetables, fish and shellfish, and healthy fasts like nuts and olive oil seem to have brain-boosting properties.

Tags
alzheimer'sdementiadietexercisememoryneuroscience
In this article
alzheimer'sdementiadietexercisememoryneuroscience
Related
Neuropsych
Memory and the benefits of forgetting
Forgetfulness isn’t always a “glitch” in our memories; it can be a tool to help us make sense of the present and plan for the future.
Neuropsych
Asthma drug brings back “lost” memories
In a study involving mice, scientists used two different techniques — one optogenetic and one pharmacologic — to recover “lost” memories.
Life
Our antidepressant drugs are affecting animals and ecosystems
A toxicologist explains the impacts of antidepressants on fish — and no, they’re not getting any happier.
Thinking
Visual thinking: How to understand the inner lives of animals
Humans are good visual thinkers, too, but we tend to privilege verbal thinking.
The neuroscience of loving music
Humans are musical animals four million years in the making, explained by music expert Michael Spitzer.
▸
8 min
—
with
Michael Spitzer
Up Next
The Present
US, Russia, China won’t join global initiative to offer fair access to COVID-19 vaccines. Why not?
The U.S., China, and Russia are in a “vaccine race” that treats a global challenge like a winner-take-all game.