Even the best charities with the longest records of doing great fundraising work have to spend some time making sure that the next donation checks will keep coming in. One way to do this is by showing potential donors all the good things the charity did over the previous year. But there may be a better way.

A new study by researchers in the United States and Australia suggests that appealing to the benefits people will receive themselves after a donation nudges them to donate more money than appealing to the greater good.

How to get people to give away free money 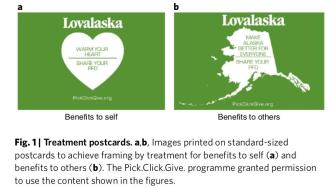 The study, published in Nature Human Behaviour, utilized the Pick.Click.Give program in Alaska. This program allows Alaska residents who qualify for dividends from the Alaska Permanent Fund, a yearly payment ranging from $800 to $2000 in recent years, to donate a portion of it to various in-state non-profit organizations.

The researchers randomly assigned households to either a control group or to receive a postcard in the mail encouraging them to donate a portion of their dividend to charity. That postcard could come in one of two forms, either highlighting the benefits to others or the benefits to themselves.

Additionally, the researchers were able to break the subject list down into a “warm list” of those who had given at least once before in the last two years and a “cold list” of those who had not. Those on the warm list, who were already giving, saw only minor increases in their likelihood to donate after getting a postcard in the mail compared to those on the cold list.

These are substantial improvements. At the end of the study, the authors point out, “If we had sent the benefits to self message to all households in the state, aggregate contributions would have increased by nearly US$600,000.”

Are all actions inherently self-interested? Thankfully, no. The study focuses entirely on effective ways to increase charitable donations above levels that currently exist. It doesn’t deny that some people are giving out of pure altruism, but rather that an appeal based on self-interest is effective. Plenty of people were giving before this study took place who didn’t need a postcard as encouragement. It is also possible that some people donated part of their dividend check to a charity that does not work with Pick.Click.Give and were uncounted here.

It is also important to note that Pick.Click.Give does not provide services but instead gives money to a wide variety of organizations that do. Those organizations operate in fields from animal rescue to job training to public broadcasting. The authors note that it is possible that a more specific appeal to the benefits others will receive from a donation might prove more effective than the generic and all-inclusive “Make Alaska Better For Everyone” appeal that they used.

In an ideal world, charity is its own reward. In ours, it might help to remind somebody how warm and fuzzy they’ll feel after donating to your cause.

Ask Ethan: Could Gravitons Solve The Mystery Of Dark Matter?

Quantum gravity tries to combine Einstein’s general theory of relativity with quantum mechanics. Quantum corrections to classical gravity are visualized as loop diagrams, as the one shown here in white. […]