When you see Nazis in the streets chanting things like “Jews will not replace us” and throwing around slurs at blacks, leftists, and other minority groups, it can be difficult to comprehend why they would believe such horrid things. While simple answers such as ignorance or stupidity are attractive, they are too basic to apply generally. After all, the white supremacist leader Richard Spencer has a master’s degree, ruling out the explanation of stupidly in at least one case. While not every Nazi has an education, the root cause of finding such an ideology attractive must lie elsewhere.

This was the same problem that faced Theodor W. Adorno in 1947. A German sociologist who had fled Europe for sunny California during the era of Fascism, he and his colleges at Berkeley attempted to understand why a person might be inclined to support the ideas of fascism and authoritarianism. Using their backgrounds in psychology, they proposed that certain individuals might be mentally predisposed to support authoritarian regimes. 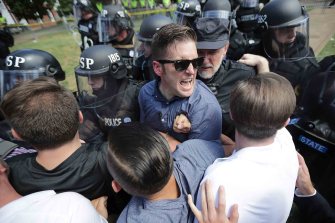 White nationalist Richard Spencer (C) and his supporters clash with Virginia State Police in Emancipation Park after the ‘Unite the Right’ rally was declared an unlawful gathering August 12, 2017 in Charlottesville, Virginia. Hundreds of white nationalists, neo-Nazis and members of the ‘alt-right’ clashed with anti-fascist protesters and police as they attempted to hold a rally in Emancipation Park, where a statue of Confederate General Robert E. Lee is slated to be removed. (Chip Somodevilla/Getty Images)

Adorno and his associates wrote a book, The Authoritarian Personality, laying out their arguments and proposing possible traits that would-be fascists share. These traits included conventionalism, authoritarian submission, authoritarian aggression, anti-intellectualism, and an interest in the use and projection of power, among others. 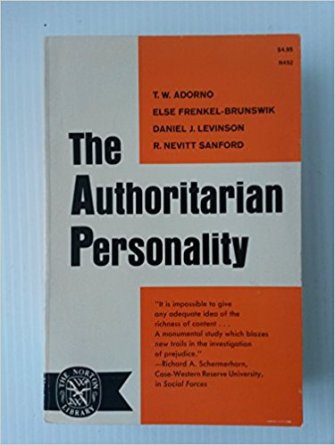 So, how do I know if I have these traits? Should I start wearing more brown shirts?

The book, after offering a psychological explanation for why individuals might come to have such traits, then proposes the idea of the “F-Scale”, “F” meaning Fascist, which attempts to indirectly measure a person’s tendencies towards the traits Adorno found to be authoritarian. The higher the score, the more likely you are to support Fascism.

Adorno was open about the theory needing to be tested, and at Nuremberg several Nazi war criminals were given the test. Despite the original theory having nine dimensions of the authoritarian personality, the Nazis who took the test only scored high on three of them. Continued research into the idea has supported the basic hypothesis, but heavily altered the test and proposed reasons for correlations between the traits.

While Adorno treated the tendency to Fascism as a mental disorder, his reliance on Freudian thought and the Western Marxism of the Frankfurt school to which he belonged made his scale seem biased, and later erroneous. The work has been critiqued from all angles, but the core concept has been found to be correct. There are certain personality traits which correlate and are related to potential support for authoritarianism.

The concept remains influential. The F-scale and it’s slew of personality traits have been reduced to three by Canadian Psychologist Bob Altemeyer, who has created a shorter, more accurate, version of the test you can take here. In the updated version of the theory the traits which constitute the Authoritarian Personality are:

Authoritarian submission: a high degree of submissiveness to authorities perceived to be legitimate.

Authoritarian aggression: a general aggressiveness directed at deviants, outgroups, and those designated to be targets by established authorities.

Conventionalism: a high degree of adherence to traditions and social norms that are seen as endorsed by society and the established authorities. This includes a belief that adherence to these norms should be mandated across a society.

The test can also be applied to authoritarians in the left, in so far as they support the use of force to change society from multi-cultural, multi-focused, and disorganized into a homogenous, well organized, singly focused whole. The tests have, however, always presumed the authoritarianism being measured was on the political right, and early versions of the test made reference to anti-Semitism. Current versions often reference homosexuality and nudity as potential examples of deviations from norms.

Why would somebody support Fascism? Is it because they had strict parents? Because they didn’t go to school? Because they have a need for order and conformity? While the root cause of having the Authoritarian Personality is still unknown, it is possible to test for it. Perhaps someday we will understand what makes a person desire such things and have a better idea on how to cure them. Until then, it is all we can do to understand when we are looking at it, and take action.

While most participants fibbed a little bit, laptop users were much more likely to lie – and by a lot more.
Up Next
Neuropsych

Yes it is, through faith and/or science.