How patent trolls hijacked the building blocks of life 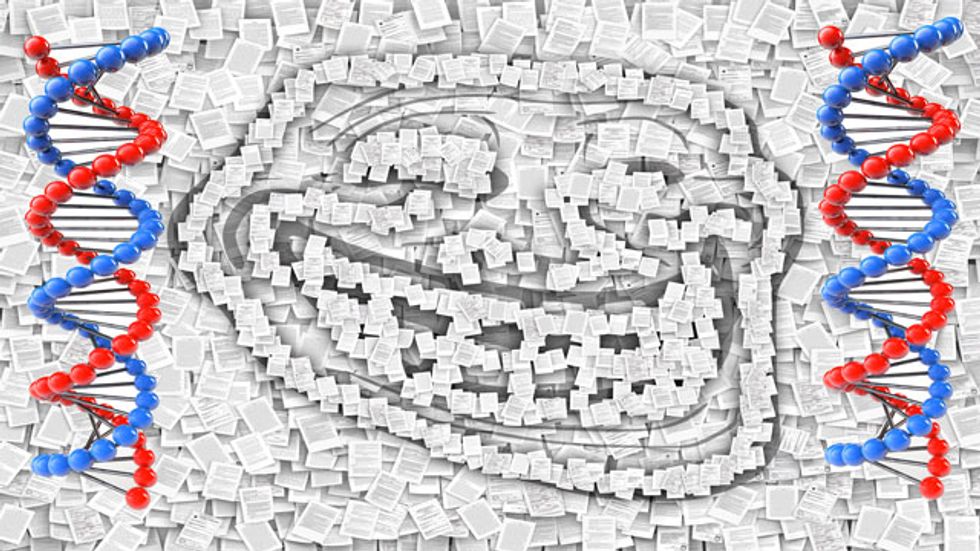 There were three great scientific horse races in the last century. The first two, the race to the moon and the race to split the atom have been widely reported. The race to sequence the human genome seems to remain slightly less well understood by the public, in spite of its critical importance to the world of medicine.

The starting pistol was fired in 1989 when the NIH, the Wellcome Trust and a number of other groups agreed to fund the $3 billion dollar Human Genome Project (HGP) which was forecast to take fifteen years to complete. The sample of DNA which contained 3.3 billion pairs was broken in to strips of 150,000 pairs. Bacteria were used to replicate the strips and they were sent to labs around the world to be painstakingly decoded. This was one of the most ambitious scientific projects in our history and at every step along the way the information was uploaded on to the internet for free for scientists the world over to research in whatever way they pleased. The project promised to provide the groundwork for the cures of countless diseases and the roadmap of the human genome was to be available for free, in full on the internet, with new data released every single day.

In 1998  Craig Venter, a disaffected NIH scientist broke away and announced that his firm, Celera, was going head to head with the HGP in a separate bid to sequence the genome, using his new method. He aimed to do this for a tenth of the price and within a fraction of the time by effectively shattering the genome in to tiny pieces and using a faster technique to fit the puzzle back together.

This created a bitter controversy. Many argued that the faster technique was to take full advantage of the freely available HGP data. It was argued that not only was Celera attempting to undercut the largest humanitarian operation of all time and beat it at its own game, with its own pack of cards, Celera intended to patent everything it found in the process. Once news of this leaked every bio-tech company, hedge fund and banking consortium under the sun wanted a slice of the pie.

The irony of the situation was the Venter had tried desperately for his project to be a part of the public project and fully intended his data to be made public. Unfortunately Venter was forced to resign to being funded by investors, who of course have the sole objective of turning a profit. Venter’s bitter fights with his peers and overlords are described in Venter’s autobiography:

“I still felt trapped by constant legal hassles as HGS blindly went on attempting to patent the data flooding from my institute, whether they had a use for it or not. This was crazy, something had to give”.

Pretty soon Celera had filed patent applications on 6,500 whole or partial human genes. The company was well on its way in the process of patenting a great number of the very building blocks that make us human and the possible keys to beating diseases and infections ranging from HIV to the common cold. Celera wasn't the only horse in the race however; patent trolls began filing DNA patents on a daily basis, based on publicly available data that was being released every night. Two other companies alone filed a further 6,300 patents each. Venter describes how “while my many critics were obsessed with the release of the Celera data, the publicly funded labs were heedlessly dumping sequences into public databases that the pharmaceutical companies were gleefully downloading nightly so they could file patents on them. This naïve policy… had precisely the opposite effect: Gene patents were filed sooner and faster, and almost all were based on government data, not Celera’s”.

Both Celera and the patent trolls had to duck for cover to escape the flack from all sides. All sides except the side of the banks that is. Celera’s stock price rapidly skyrocketed from $8 a share to $500 to share.

Things finally peaked when rumours surfaced that Celera was about to beat the HGP in the race to sequence the genome. Could it be possible that the whole genome was about to be reconstructed, only to be torn apart and patented bit by bit by one company? Wall Street went crazy, if this was true this would be the biggest, baddest, gamble in history and everyone wanted in. In the end President Clinton himself had to go on TV to tell everyone to calm down:

“in the strongest possible terms our genome, the book in which all human life is written, belongs to every member of the human race”

To sighs of relief from scientists and non-bankers everywhere Clinton asserted that no-one was going to patent the Genome. DNA was not for sale. Predictably enough, the bankers pulled out faster than a priest caught doing the bad thing. The Nasdaq experienced the second biggest crash in history losing a mammoth $50 Billion in 2 days on biotech stock alone. Celera tumbled from a listing of 47 to 142 on the New York Stock Exchange.

Unfortunately this was by no means the end of the battle, in reality little changed, patents on human genes continued to stand in the way of affordable access to treatment. Research recently published in the journal Genome Medicine found that at the very least 40% of the human genome was patented, note that the graph below is on a logarithmic scale, if this graph was on a linear scale, the line would appear to be pretty much vertical and you’d need a much bigger screen to fit it all in.

Finally, this month the US Supreme Court ruled unanimously against the patenting of human genes, reversing the decisions of previous courts. At long last we can now say that we all own the building blocks from which we are made. Though it's still unclear precisely how much we should rejoice. In the ruling (which had three errors in the first paragraph) the presiding judge both admitted he did not understand the science and left the door open with regard to more intricate cases than the one that brought the matter to court.

If it was news to you that something as fundamental as the building blocks of life, were until now patented material, then it’s worth investigating further the madness that is current patent law, This American Life recently conducted a fantastic report on the tragic state of affairs. According to the Federal Trade Commission, the majority of patent law cases are currently conducted by patent trolls. Obama has recently declared war on patent trolls, it will now be down to Congress to ensure the law is changed to make it harder for patent trolls to hold us to ransom. Today a leading patent troll was finally taken to the court, it'll be a case worth following. If the war against patent troll is to be won, it'll be down to all of us to get patent trolls into the public consciousness. Hopefully soon it won’t just be our DNA that is freed from their grip.