How NOT to spot a murderer's brain 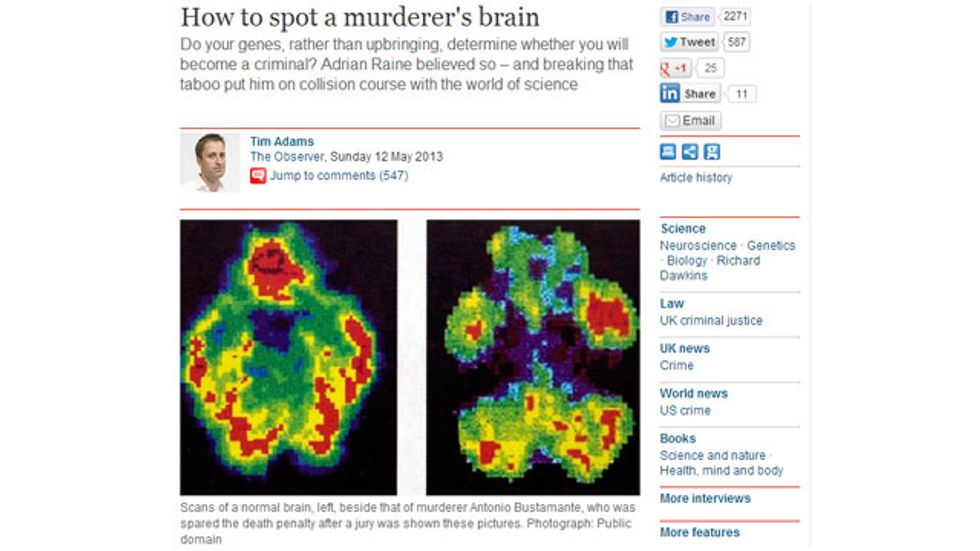 Update 13/05/13  1.55PM: The paragraph has now been cut completely with the following note "A paragraph that misrepresented the views of the neuroscientist David Eagleman has been removed. The paragraph implied that Eagleman believed that the possession of particular genes resulted in criminal behaviour. This is not his belief, in his words, "Genes are part of the story, but they're not the whole story. We are likewise influenced by the environments in which we grow up".

An article by Tim Adams in yesterday's Observer (the Sunday edition of British newspaper The Guardian) is currently topping the most read list on The Guardian's science section. The piece makes a spine tingling case, the byline reads: "Do your genes, rather than upbringing, determine whether you will become a criminal?". The most damning segment of the article is the following quote from neuroscientist David Eagleman, taken utterly out of context:

Jim Parkinson, a Postdoctoral Researcher at the Body and Action Group in the Institute of Cognitive Neuroscience at UCL helpfully pointed out on Twitter that Eagleman's punchline seems to somehow have been misplaced from the quoted text. Eagleman’s punchline is that the mystery gene in question is the Y chromosome. So yes, men are more likely to be arrested for most crimes but this tells us precious little regarding whether "genes, rather than upbringing, determine whether you will become a criminal" and that was Eagleman’s point! You can read Eagleman’s quote in full in a 2011 Atlantic article:

Jim Parkinson has submitted a letter The Observer which I've seen, I'll be watching closely to see if they publish it along with a correction on Sunday. If they don't I'll post it here on Monday. By the way, I've posted this debunking to Rbutr, a fantastically useful tool for debunking misinformation on the internet, it’s worth checking out and installing on your browser - it'll give you a small notification if an article you are reading has been debunked elsewhere and added to the system.

This article, like so many others written for legacy newspapers, is made infinitely, nightmarishly more difficult to assess because there are so many studies mentioned but few real references are provided. This means that if I'm to try to assess this or that point, I have to quite literally guess what studies the author is referring to. This task is no mean feat without even basic information such as names of the study authors or date of publication. This really is a tragic situation to be in two decades since hyperlinks became a basic feature of the internet. There's plenty more in this article that I'd love to address, but I simply don’t have the spare time to spend guestimating what studies the author might or might not be referring to. If you have been able to divine which studies the author refers to in this piece or if you'd like to add to the discussion please do so in the comments. For a slightly more balanced account of Adrian Raine’s case check out NPR’s interview which you can listen to here.