Let kids be kids. Watching over your children's every move is a bad idea, and the long-term effects of helicopter parenting are far worse than thought. 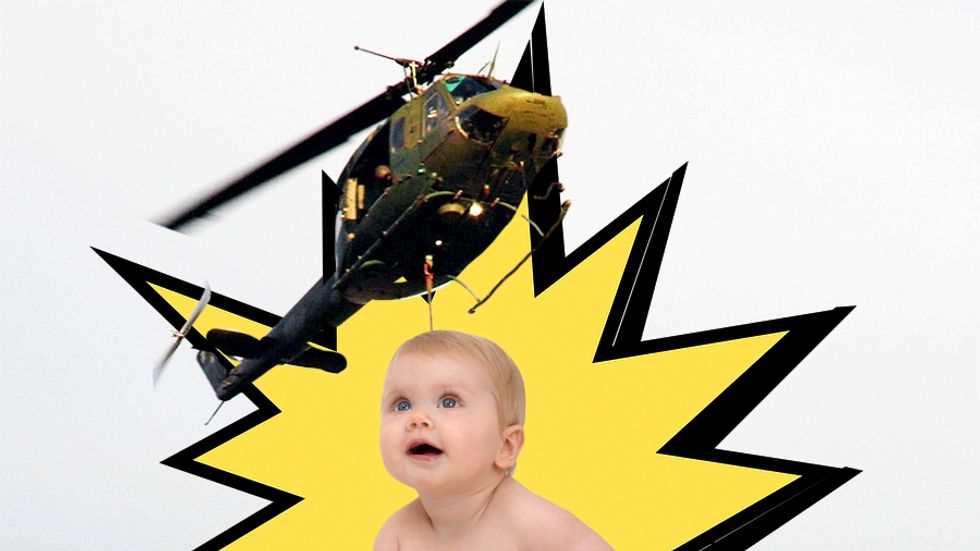 "Helicopter parenting"—or, the practice of hovering over your kids and watching everything they do, constantly worrying about whether they'll make a slight misstep in life—is everywhere. I'm writing this at a coffee shop and if I so much as raise my head I can see an easy half-dozen examples of parents perhaps too invested in every move their child makes.

On one hand: sure, yeah, parenting involves keeping your child out of trouble. For every"Quentin, don't try to use the espresso machine, that's the barista's job" (actual quote by actual parent said in this actual coffee shop) there's some real parenting advice like, "maybe don't play directly in traffic" and "don't get in a stranger's car." On the other hand: parents are overdoing it.

A new study released by the American Psychology Association, available here, proves that if you make it so your child never makes a mistake, this will not adequately prepare them for the outside world. The study followed 422 children of different racial and socio-economic backgrounds over eight years with assessments at ages 2, 5, and 10. Data were collected in a variety of ways: from the children themselves at age 10, through clinical observation, and through teacher reports. At all times—especially during the clinical observations—participants were asked to play with their children the same way they would at home.

The researchers found that being an over-controlling parent created a knock-on effect, wherein the younger a child was "helicoptered" (if you will) the more it impacted their development. From the APA press release:

Overcontrolling parenting when a child was 2 was associated with poorer emotional and behavioral regulation at age 5, the researchers found. Conversely, the greater a child’s emotional regulation at age 5, the less likely he or she was to have emotional problems and the more likely he or she was to have better social skills and be more productive in school at age 10. Similarly, by age 10, children with better impulse control were less likely to experience emotional and social problems and were more likely to do better in school.

The author of the study, Nicole B. Perry, PhD, of the University of Minnesota, had this to say:

“Our research showed that children with helicopter parents may be less able to deal with the challenging demands of growing up, especially with navigating the complex school environment. Children who cannot regulate their emotions and behavior effectively are more likely to act out in the classroom, to have a harder time making friends and to struggle in school.”

And if you're wondering if helicopter parenting is a new thing: it isn't. The term originally appeared in 1969, in the book Between Parent & Teenager by Dr. Haim Ginott, but gained a lot of popularity in the early 2000s when colleges saw a dramatic increase in calls from (baby-boomer age) parents. In 2016, for the first time in 130 years, more young adults live with their parents than partners. And the U.S. isn't the only culture to have this: in China, the term "Little Emperor Syndrome" is used to describe how the children of helicopter parents act.

Perhaps buoyed by a social-media culture where pretty much anyone can Google enough questionable information to justify whatever they want to believe, helicopter parenting isn't slowing down.