Nikola Tesla predicted drones, but also predicted their awesome power would unite us all. So far, the only weapon to do that was the Atomic Bomb. 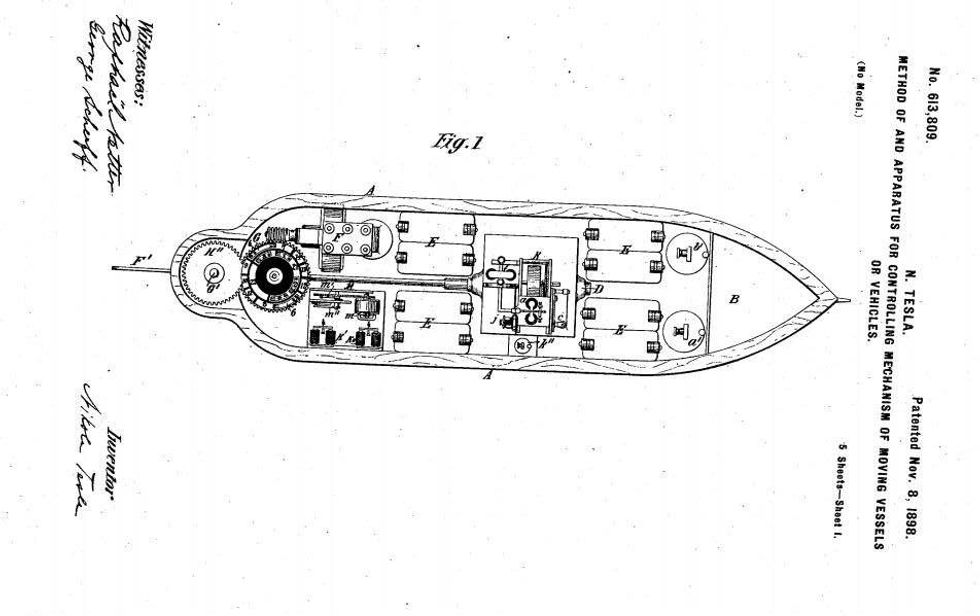 Nikola Tesla's patent for a drone.

Nikola Tesla made some interesting predictions during his time on this Earth. Some which show he was a man beyond his time, like when he described a concept for the wireless smartphone, and a man of his time, like when he predicted women would succeed men (and not in a good way). He also predicted drone warfare in a patent, and claimed this machine's destructive power would be so immense it would bring about a peace among all nations.

The patent was highlighted by technologist Matthew Schroyer:

On November 8, 1898, Tesla was granted his patent for a “METHOD OF AND APPARATUS FOR CONTROLLING MECHANISM OF MOVING VESSELS OR VEHICLES."


He describes the machine as a vessel that would “require no intermediate wires, cables, or other form of electrical or mechanical connection with the object save the natural modia in space. I accomplish, nevertheless, similar results and in a much more practicable manner by producing waves, impulses, or radiations which are received through the earth, water, or atmosphere by suitable apparatus' on the moving body and cause the desired actions so long as the body remains within the active region or effective range of such on currents, waves, impulses, or radiations."

Tesla also thought this device would be so powerful that it would bring nations' together after displaying its destructive power. Although, drone warfare has been the weapon of choice for the United States resulting in its use to target and kill thousands of people, it has not brought about the world peace he predicted. The only weapon, so far, that has been able to bring about this kind of peace was the Atomic Bomb.

But as John Oliver described in a segment on drone strikes during an episode of Last Week Tonight, drones may not have received the deadly classification they're due, simply because we receive so little information about them:

There's an element of spectacle that the Atomic Bomb had, which drone strikes, sadly do not carry for a large part of the world. The weight of their destructive power cannot be summed up in one giant mushroom cloud decimating an entire city and incinerating its people. Rather, drone strikes are the silent killer and their devastating power can only be seen in the testimonies of people from Yemen, Pakistan, and other far-off countries and in the civilian casualties they have racked up over the years.